Muslim Americans fearful of Trump ban but heartened by protests

'As a citizen, I feel robbed of my rights. I am afraid for myself and my wife and my children. I’m scared to leave the country' 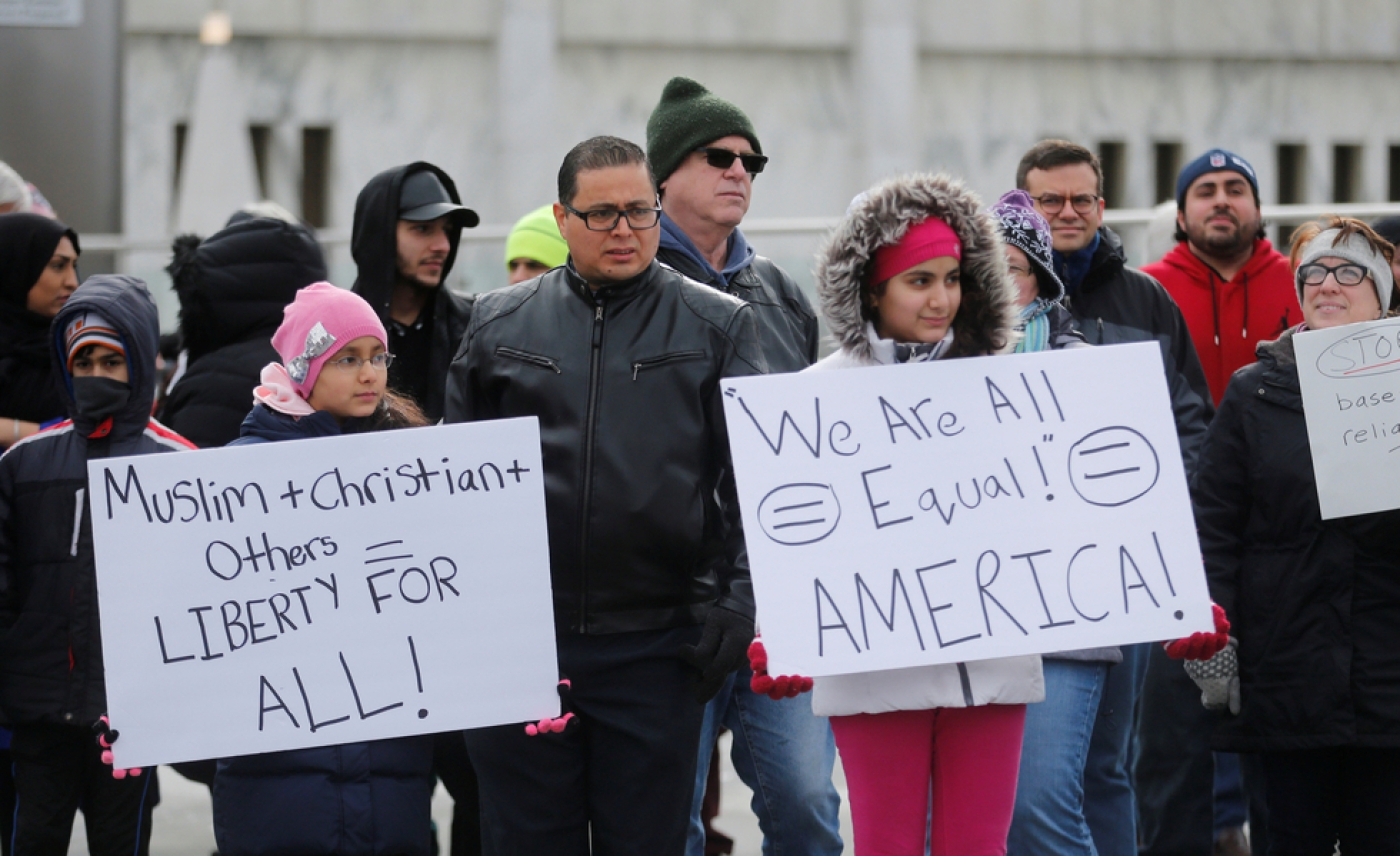 DEARBORN, United States - Muthana Abdullah, a Yemeni American activist, was eager to reunite with his sister and her husband and children after they had been called to pick up their immigration visa from the US embassy in Djibouti.

The family had left the Yemeni city of Aden for Egypt and made their way to Djibouti only to find the embassy’s door literally shut in their face.

Abdullah had waited more than a decade for his family’s paperwork to be approved. Now they are stranded in Djibouti.

Abdullah is just one of the many Muslim-Americans directly affected by President Donald Trump’s executive order temporarily banning refugees and restricting immigration from several Muslim-majority countries.

The family cannot return to Yemen because of the US-backed war between Saudi-led forces and the Houthis, and they cannot come to Michigan because of the ban. With nowhere to go, they don’t know when or if they will get a new appointment for the visa.

“They had done their medical check-ups. They went through all the lawful steps for the application,” Abdullah, a US citizen, told MEE. “We don’t know what to do. I don’t know why things have gotten out of hand.”

He said he has nowhere to turn - even a US senator he contacted was not able to provide thorough answers.

“They overstepped all human rights in this country,” Abdullah said of the Trump administration. “As a citizen, I feel robbed of my rights. I am afraid for myself and my wife and my children. I’m scared to leave the country. I am scared I can lose everything and may have to start from zero.”

He added that the order reveals a level of Islamophobia that is heightening fear in the Muslim community, where Muslim Americans worry about being targeted in their own homes, business or houses of worship.

“We are angry about all of this,” Abdullah said.

But despite the distress, Abdullah said he found comfort in the protests against the Muslim ban after attending a demonstration at Detroit Metro Airport on Sunday.

Who speaks for Muslims? The Saudis, the Turks or the Germans?

“There were demonstrations of all religions, of all sects, of all ethnicities,” he said of Sunday’s protest. “I felt safe. This is the America I made my home since day one. These are the Americans we loved. This is the American dream that we could not pursue in our homelands because of war and corruption. This is what comforts me. There are kind people in this land.”

The ban has stoked worries in immigrant and Muslim communities across the country.

'We bombed them, now we send them back'

Suehaila Amen, a Lebanese American activist who once starred in the reality TV show All-American Muslim, told Middle East Eye that persecuted and oppressed communities have always sought refuge in the United States.

She added that the US has contributed to the ordeal of the citizens of the banned countries - Yemen, Libya, Iraq, Syria, Somalia, Iran and Sudan - through its "war on terror" policies.

“We had gone into your countries and bombed them and obliterated them into rubble and now we don’t want you to be in our country, and we want you to return to a place where you don’t even have a home,” Amen said Washington is telling refugees.

Fatina Abdrabboh, a civil rights attorney, said there is a frenzy in the community about the ban and what it means for different categories of residents and potential immigrants.

She said absorbing the executive order has been tough for Arab and Muslim Americans.

“It’s a ban. It’s exclusionary. It’s divisive. And it’s really stoking the flames of ugliness towards our community,” she said.

Muslim ban: Why I refuse to go to America

She called on Arabs and Muslims to extend their solidarity and civil rights advocacy to other religious and ethnic communities that are standing against the ban.

“People are motivated,” Abdrabboh said. “Perhaps it’s a forced motivation… But I think we are taking advantage of the moment and trying as much as possible to turn it into a movement.”

But Abdullah, the Yemeni American activist, said the United States shows a different face of intolerance when one watches the news and listens to politicians.

“There is a big and deep schism that President Trump has caused,” he continued. “I fear that one day America will become like the Middle East because of these amateur policies.”

He said the ban punishes victims of war in the Middle East while overlooking its causes. He said Syrians will suffer the most from the ban.

“This decision has proved that Syrians are being victimised by everyone - from the Syrian regime, from the Islamic State groups and from some Western countries, namely the United States,” Abdulwahid told MEE. “Even the previous administration was not helping Syrians adequately. In this context, we recall President Obama’s ‘red lines’ that only further complicated the Syrian crisis without providing any solution for Syrians.”

“It’s a ban. It’s exclusionary. It’s divisive. And it’s really stoking the flames of ugliness towards our community.”

The United States had been heavily involved in the Syrian conflict.

President Barack Obama had drawn a “red line” vowing to intervene against Syrian President Bashar al-Assad if the government used chemical weapons - a promise largely viewed as unfulfilled after an alleged chemical attack by government forces on the suburbs of Damascus in 2013.

On the clash of values and Trump’s religious testing proposal, Abdulwahid said Syrians have no issues with US society, even if they sometimes oppose Washington’s foreign policies.

Abdulwahid, a Homs native, said his entire family has had to flee the war-ravaged province. But he has been unable to bring any of them here.

Abdulwahid said anxiety is felt in Arab and Muslim communities across the United States.

“Islamophobia is not a theory; it is more than a reality,” the Syrian American journalist said.

He added that bigotry is now a major aspect of US politics.

“Islamophobia was one of the factors that brought Trump to the presidency. But not only did Trump use Islamophobia to get to the White House, he has also helped in solidifying this phenomenon since day one,” he said.

The Midwestern city of Dearborn has been a welcoming home for Middle Eastern immigrants since the turn of the past century. The east side of the city, where most storefronts feature Arabic signs, voted overwhelmingly in favour of Hillary Clinton in November. Here, the angst about the order that has become known as a Muslim ban, is apparent among residents, activists and officials.

Congresswoman Debbie Dingell, a Democrat whose district is based in Dearborn, was among the first US lawmakers to condemn the ban, calling it “deeply disturbing”.

"We are a model for how a city can be made up of people from many different backgrounds, yet remain a unified community"

On Monday, Dingell joined 160 other Democrats in the House of Representatives introducing a bill that would bar US funds from being used to implement Trump’s ban, effectively reversing the executive order.

With Republicans in control of both houses of Congress the bill has little hope of advancing, but it remains a gesture of defiance against the president.

“Providing for a strong national security includes protecting the fundamental pillars of our democracy: freedom of religion, freedom of speech, compassion and justice,” said Dingell in a statement on Monday. “This executive order runs contrary to our values as Americans, and I am proud to stand with my colleagues to say that we will not allow fear and hatred to divide us.”

On Friday, the congresswoman released a strongly worded statement in defence of her Arab and Muslim constituents, saying they are “among the most loyal and patriotic Americans I know”.

Dearborn’s mayor, Jack O’Reilly, also denounced the ban, pledging to do everything in his authority to make sure that all residents feel safe and welcomed.

"We are a model for how a city can be made up of people from many different backgrounds, yet remain a unified community," O'Reilly said in a statement. "Our decades of success are proof that there is a reason that inclusion is an American value."

"While I strongly believe national security is important, and even more so as a mother, this order strikes at our very core as Americans and what our country is built on," she said in a statement.