Rashida Tlaib calls on Michigan's Muslim-Americans to back 'Ammu Bernie'

Congresswoman tells Middle East Eye that Sanders' advocacy for human rights is part of his core values, not just rhetoric 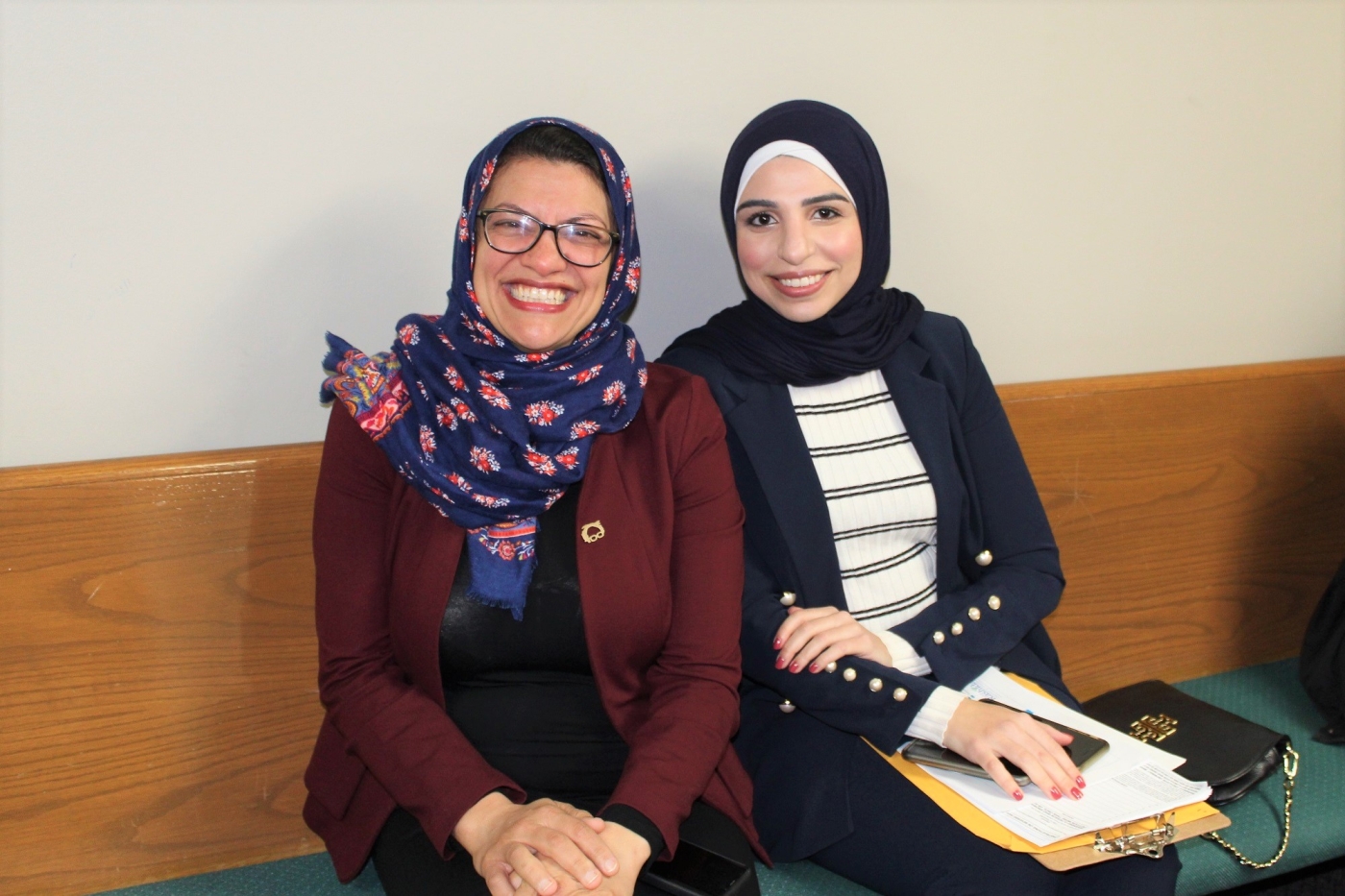 Congresswoman Tlaib (L) with one of her aides at mosque in Michigan (MEE/Ali Harb)
By
Ali Harb
in
Dearborn Heights, Michigan

Rashida Tlaib has an outline of Senator Bernie Sanders' hair and glasses attached to her maroon blazer. She points to it with joy and pride - "Do you like my pin?"

As the congresswoman waits to give a speech to worshippers at a mosque in the Detroit suburb of Dearborn Heights, her aides scramble to squeeze her remarks in between the imam's sermon and Friday prayers.

She has a long day of campaigning ahead. After Vice President Joe Biden made big gains in the Democratic presidential primary race, Michigan has become a do-or-die battleground for Sanders' campaign.

And Tlaib - one of America's first two Muslim congresswomen - hopes the Michigan Arab and Muslim communities will play a determining role in a Sanders' victory on Tuesday.

[Sanders] doesn't just see me as a Palestinian or Muslim, he sees me as someone who's also against corporate greed. He sees me as an equal.

"I sincerely have never seen someone talk about human rights for all, talk about peace and the importance of ending endless wars like he has," Tlaib tells Middle East Eye.

"And he's been consistent about it. It's not rhetoric for him. It's part of who he is and his values."

As a self-described "unapologetic" Palestinian-American, Tlaib has been outspoken and sometimes unfiltered in criticising President Donald Trump.

She has also faced attacks over her support of the Boycott, Divestment and Sanctions (BDS) movement, which seeks to pressure Israel politically and economically to end its abuses against Palestinians.

The congresswoman, who has campaigned for Sanders in several states, says Sanders embraced her support "without hesitation," despite the perception that she may be a controversial figure.

'He sees me as an equal'

Tlaib is also a fierce environmental justice advocate who has spent most of her political career advocating for working-class communities in Detroit.

"He doesn't just see me as a Palestinian or Muslim, he sees me as someone who's also against corporate greed. He sees me as an equal," Tlaib said of Sanders. In the battle for the Muslim vote, Sanders destroys the competition: poll
Read More »

She added that the senator is building an inclusive movement.

"Even when people are running away, he's completely unafraid to hug our children, to welcome us," the congresswoman told MEE.

Still, by elevating many Palestinian rights advocates, Sanders has opened himself up to criticism by Israel's supporters.

Last week, the executive director of the American Israel Public Affairs Committe (AIPAC), a lobbying group, slammed Sanders - without identifying him specifically - for working with Palestinian rights activists. Howard Kohr said he had to "sound an alarm" about some politicians who seek to undermine US support for Israel.

"These political leaders have chosen to deploy several surrogates who have long records of hostility to the Jewish state," Kohr said. "In the rising movement against the US-Israel relationship there are familiar faces, but they are not our friends."

Tlaib dismissed such attacks against the Democratic presidential candidate, saying that she and the senator, who is Jewish, are not hostile towards Israel.

"We're talking about human rights - that everybody deserves freedom and equality and justice," Tlaib told MEE. "And that's what we're standing up for. That means, we want Israel to be better. That means we're not anti anything; we're pro-human rights."

In her pitch to worshippers at the Islamic Institute of America on Friday, Tlaib cited Sanders' support for Palestinian human rights and push to end the Saudi-led war in Yemen.

Endearingly, she repeatedly referred to the senator as "Ammu Bernie", using the Arabic word for uncle. 'A show of force': Muslim-Americans plan to get the vote out on Super Tuesday
Read More »

"I'm tired of the endless wars. I'm tired of people calling me and saying, 'I can't get my family here because of the Muslim ban'," Tlaib said, switching between Arabic and English from the podium where the imam had delivered his Friday sermon, a navy blue scarf covering her head.

Sayed Hassan Al-Qazwini, a prominent local Iraqi-American imam had introduced her as a "national hero," saying that while it was not common to allow politicians to speak after Friday sermon, Tlaib is the "voice" of the community.

For her part, the congresswoman stressed to the congregants the power of their vote. "No matter what you do for a living, what your background is, when you vote, you become equal to the millionaires, to the billionaires, to everybody that doesn't believe in our community."

Earlier on Friday, she sounded optimistic about the Arab and Muslim turnout as well as Sanders' chances. US Elections 2020
In battle for the Muslim vote, Sanders destroys the competition: poll