The Nakba, 70 years later: What young Palestinians hope for the future

There are now more than five million registered Palestinian refugees, many of whom have never visited their family homes 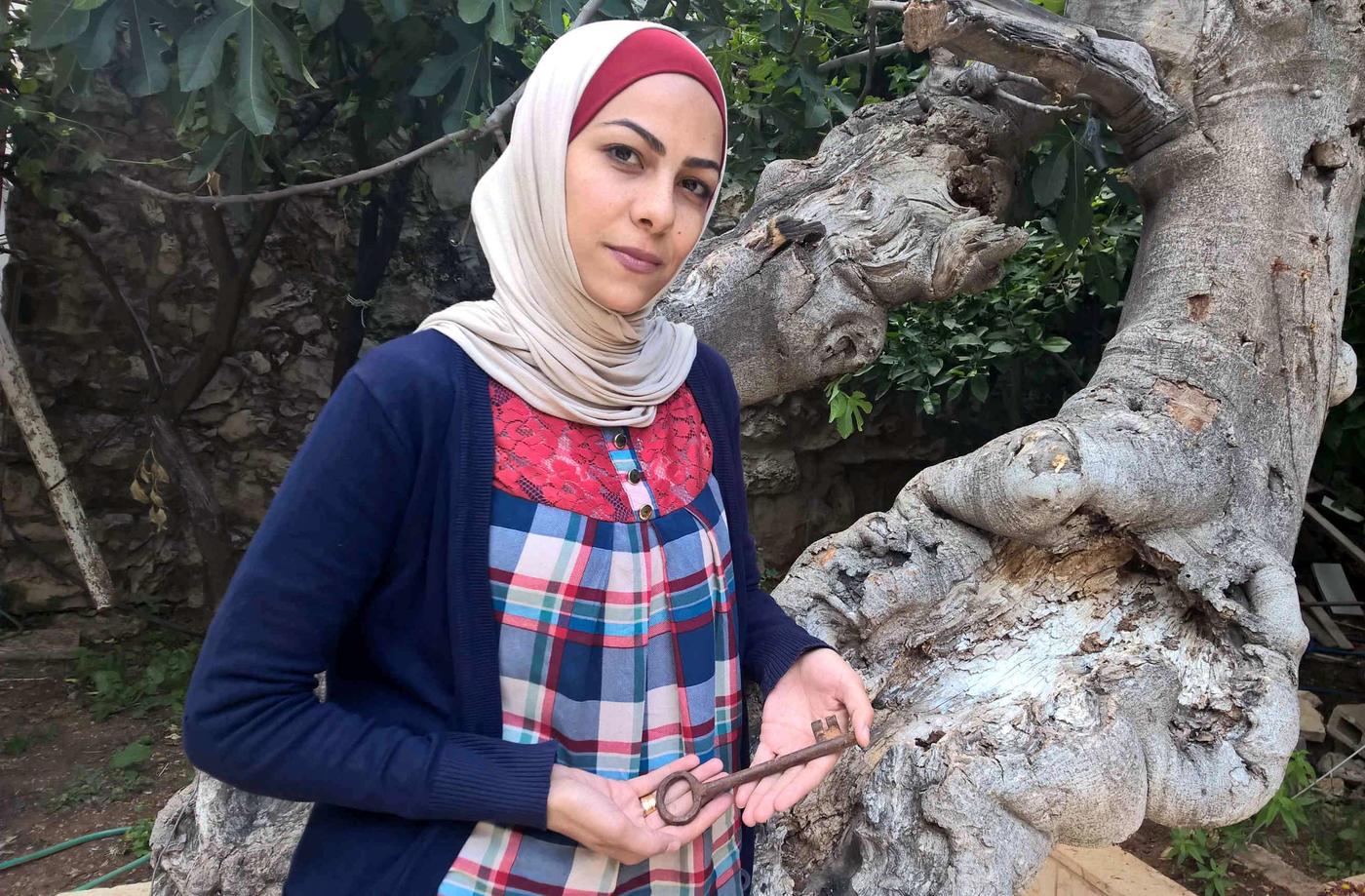 Ghaida: "This isn’t just the cause of refugees, it’s also the cause of all Palestinians" (Chloe Benoist/MEE)
By
Chloé Benoist
, Lubna Masarwa

David Ben Gurion, Israel’s first prime minister, is once reputed to have said that “the old will die and the young will forget”. While the source of the quote is unclear, it is a line which has long been used to symbolise the hopes of many that future generations of Palestinians would eventually relinquish their claims to historical Palestine.

On Tuesday, Palestinians commemorate the Nakba - which means "catastrophe" - marking 70 years since the expulsion of more than 700,000 people from their homes during the creation of the state of Israel and the conflict which followed.

But despite nearly 70 percent of the Palestinian population being under the age of 29, the young - particularly young refugees - remain politically and economically marginalised in Palestinian society.

‘My daily reality is Nakba’

Yet those refugees interviewed by Middle East Eye - many of whom have never had an opportunity to visit their grandparents’ lands - remain defiantly opposed to the occupation and committed to seeking justice for their community.

Hamza, 24, a youth centre worker, lives in the Dheisheh refugee camp in the southern West Bank near Bethlehem. He says it is unbelievable how many children who have grown up in the camp nonetheless know about their ancestral villages, which are now in present-day Israel.

“They say they are from their original village, and they know how many people lived there and where it is located,” he says.

Refugees in the region surrounding Bethlehem - which includes the camps of Aida and al-Azza as well as Dheisheh - spoke to MEE of memories passed on by relatives who fled in 1948.

They talked of yellowing property deeds from Beit Natif, of heavy iron keys which serve as mementos of their family homes in Deir Aban, of the water well in the backyard of their grandmother’s house in the village of al-Malha, and of the smell of wild sage in Deir al-Sheikh.

Young refugees explain that their families and communities have taught them about the history of the Nakba from a young age but that many non-refugee Palestinians, especially from more affluent areas, are not as well versed.

Ghaida, a 23-year-old who lives in Aida, says: “The Nakba needs to be taught in our schools. This isn’t just the cause of refugees, it’s also the cause of all Palestinians.”

All the young refugees who spoke to MEE emphasised that they do not view the Nakba as simply a historical event which began and ended in 1948.

The living conditions in refugee camps today, which include poverty, overcrowding, shoddy infrastructure and lack of public space, are compounded by regular night- and daytime raids by Israeli forces, numerous arrests and countless casualties due to the army’s use of ammunition and tear gas.

Inas, a 24-year-old aspiring lawyer, explains: “My daily reality in the refugee camp is Nakba. The fact that, every day, the Israeli army enters here and shoots at us, is Nakba. To have seen my neighbour shot and killed right outside my house is Nakba.”

Ghaida, who also studied law, describes what she regards as the routine oppression by Israeli forces as a deliberate attempts to create a “culture of fear and submission” among refugees.

"I have the right to live in peace, the right to a good education. The Nakba is very important for refugees, because their human rights were robbed.”

‘Refugee camps are not our final destination’

Young refugees remain committed to the idea of the right of return to their forefathers’ homeland, as guaranteed by United Nations Resolution 194.

Meanwhile Hamza says that, for him, the camp is a waiting room. “This is also what I teach the youngest here in the community," he says, "that we are here temporarily, that this is not the final destination.”

But the younger generation of Palestinians are frustrated by the mountain of obstacles in the way of their dreams, including the Israeli government and its hardline policies, the United States’ increasingly staunch support of Israel under President Donald Trump, and the inaction of the international community.

And while refugees regard the Israeli government as the primary violator of their rights, they also hold the Palestinian Authority (PA), led by President Mahmoud Abbas, as responsible for upholding the Israeli occupation and maintaining the status quo to the detriment of their rights and needs.

We pay such a high price to remain here and to resist, only to see that some Palestinian political parties don’t really care about the right of return

Sami, a 21-year-old resident of Dheisheh, says: “The PA doesn’t acknowledge that the lands of 1948 are where our villages are, and that creates frustration among us."

He waves his arms emphatically while his friends agree. "We pay such a high price to remain here and to resist, only to see that some Palestinian political parties don’t really care about the right of return."

Mohammed, 23, highlights how the PA’s much-criticised security coordination with Israeli authorities has stifled resistance in the occupied territories, and particularly in the West Bank since the PA lost political control of Gaza to Hamas in 2007.

“Between the people and the government, there isn’t trust,” he says. “In the West Bank, if you want to go fight the occupation, many people in the government will be against you, the PA will attack you before Israel does. So we are fighting against two sides.”

The Palestinian Authority, which is led by Fatah, has seen its image severely eroded among Palestinians for several reasons, including the absence of presidential elections since 2005, its acquiescence to Israeli terms and policies which are deemed detrimental to the Palestinian people, and its backing of a two-state solution, which in essence would mean reneging on the right of return.

At least 50 percent of respondents who replied to a survey carried out by the Palestinian Centre for Policy and Survey in March 2018  said that they regard the PA as a burden on the Palestinian people.

Hana, 23, says: “The PA may give up the right of return to satisfy Israel and the US, but this won't be accepted by the people. We didn’t suffer and lose the lives of our people so one political party could go and sell it away.”

While political leaders have failed to resolve the Israeli-Palestinian conflict for seven decades, a solution appears further out of reach.

“It changes the situation for the people that live here. It makes it harder for us to return home, and I don’t think we can go back to how it was in 1948.”

Yet despite facing immense hurdles, young refugees remain hopeful that a just solution can be reached by their own generation, even if they disagree on the forms their resistance should take, be it armed struggle, peaceful demonstrations, international outreach, the BDS (boycott, divestment and sanctions) movement or a combination of all the above.

Mohammed says: “This generation knows about the Nakba, the Naksa [the "setback" after the war of 1967] and the Israeli occupation’s policies against us.

"There are youth movements, not just for refugees, but in the north, and the south, in camps, in villages. The role of youth is very important, and we see them study politics and specialise in the Palestinian cause to focus on our future.”

The international community’s lack of significant sanctions against Israel’s repeated violations of international law has only further convinced refugees that the key to their fate is in their own hands.

“I don’t have any hope in the international community, I only have hope in us, the Palestinian people,” Sami says.

For many, a popular Palestinian uprising would first need to target the Palestinian Authority before turning against Israel.

I don’t have any hope in the international community, I only have hope in us, the Palestinian people

With nearly three-quarters of Palestinians too young to remember a time before the establishment of the Authority in 1993, the widespread disillusionment with Palestinian political institutions has persuaded many that the road to liberation requires an uprising against the Abbas government.

“A youth movement against the PA to change the leadership is the only way we can change our reality,” Hamza says. “Only an outburst from youth can change the current leadership and the situation.”

Ultimately, young refugees said they remained determined to continue advocating for themselves, 70 years on.

Inas concludes: “It has to get worse for things to get better, but whatever happens, the injustice will end. It cannot continue forever.”

For his part, Mohammed is hopeful. “Just as hope remained with my father, my grandfather, my mother, and my family, it stays with me now. If we don’t have hope, we cannot build a generation.”