A Syrian woman cries after an airstrike hit the eastern part of the Syrian town of Tal Abyad (AFP)
By
MEE and agencies
Nearly 600 people have been killed in Russian air strikes in Syria nearly a month into Moscow's campaign, two-thirds of them opposition fighters, a monitor said on Thursday.
A total of 595 people have been killed in Russian strikes since 30 September, two-thirds of them fighters with opposition forces including the Islamic State group, the Syrian Observatory for Human Rights said.
The other third, some 185 people, were civilians, including 48 children, the Britain-based monitor said.
Russia has carried out strikes throughout Syria, with only four of the country's 14 provinces untouched by the aerial campaign since it began, according to the group.
The Observatory said it had documented the deaths of 131 IS fighters and 279 other opposition fighters.
Russia says its aerial campaign targets IS and other "terrorists" but rebel forces and their backers accuse Moscow of focusing on so-called moderate fighters.
Several medical groups have also accused Russia of strikes that have hit field clinics and hospitals in Syria.
Russia's air campaign has given new momentum to Syria's ground forces, who have launched offensives in several provinces with air cover from Moscow.
But the offensives have had mixed results.
In the central province of Hama province, the government has taken several villages but failed to advance much towards a key town on a highway in the region.
And in Aleppo, it has captured at least six villages from rebel forces, along with several hilltops.
But an IS advance meanwhile has severed the only route in and out of the government-held west of Aleppo city.
Russia's intervention in Syria follows that of a US-led coalition that has been carrying out strikes against IS in the country since September 2014.
The US-led coalition does not coordinate with Damascus however.
According to the Observatory, the US-led strikes have killed 3,649 people since they began, around six percent of them civilians.
The monitor said earlier this week that US-led raids had killed 3,276 IS fighters, 147 members of Al-Qaeda affiliate Al-Nusra front and 226 civilians. 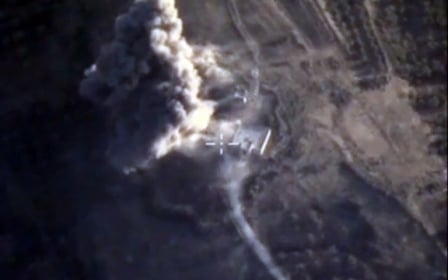