UN-backed GNA's tenuous grip on Tripoli exposed, as clashes trap hundreds of migrants without access to food or water 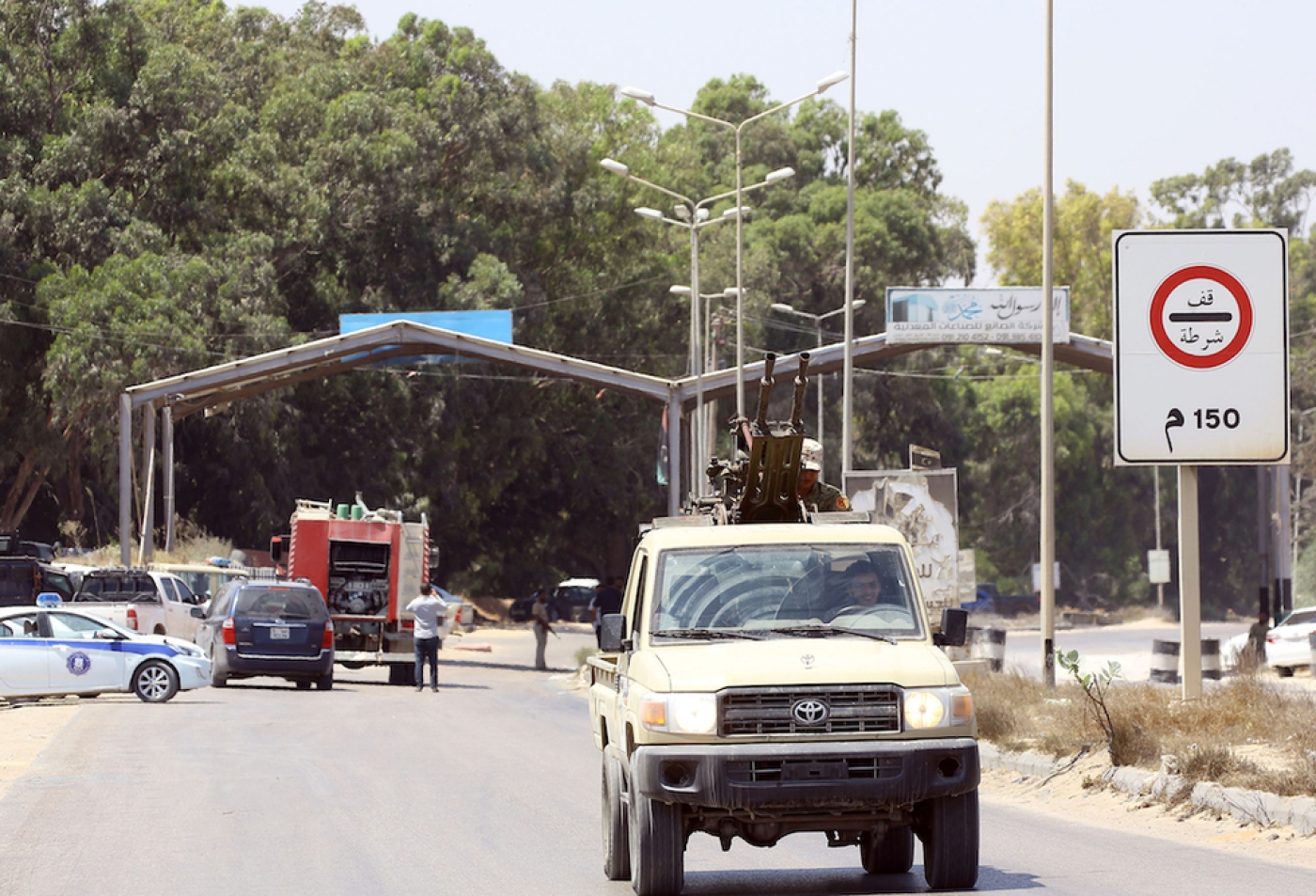 Libyan security patrol near the site of an attack on a checkpoint in the city of Zliten, 170km east of the capital Tripoli (AFP)
By
MEE and agencies

Fresh fighting erupted in the Libyan capital on Wednesday following the collapse of a truce, a witness and military source said, after the United Nations called for calm.

A military officer with forces loyal to the UN-backed Government of National Accord (GNA) said there had been intermittent fighting in Tripoli's southern suburbs.

"A combined force from the ministry of defence and [ministry of] interior of the GNA led an offensive against positions of the Seventh Brigade," he said.

The fighting has laid bare the tenuous control the GNA has over the Libyan capital, with observers fearing that security in the city could be compromised for some time to come.

Speaking to Middle East Eye, Riccardo Fabiani, geopolitical analyst at Energy Aspects, said: "The situation in Tripoli is worrying, but it's hard to say what is happening is surprising. The relative stability of Tripoli was predicated on a handful of militias controlling the city and excluding other armed groups."

The GNA has relied on local militias to enforce law and order in the capital, as the UN-backed government has been unable to find a solution to the widespread arms in the country. Armed militias are in control of the airport.

"This is very different from a government exercising its monopoly on violence and imposing stability. Rather, it was an ad hoc arrangement that suited the UN-backed GNA because it enabled them to establish themselves in Tripoli and to pretend they were in control," Fabiani said.

The GNA, as well as other transitional authorities, has tried and failed to integrate the armed forces into a regular army, relying on militias to ensure the capital’s security.

"The GNA can only sit on the sidelines and watch - they can't really go against the same militias that give them the illusion of control, because they have no power over them," Fabiani said.

Clashes first broke out early on Monday in Libya’s capital city as competing authorities continue to vie for power in the country. Rival militias linked to the GNA in Tripoli exchanged gunfire in the south of the city.

The fighting pitted the Seventh Brigade from the town of Tarhuna - to the southeast of Tripoli - against a coalition of armed brigades working under the interior ministry, including Misrata’s 301 Brigade, and the Ghnewa Brigade. The Seventh Brigade has been stationed in the southeastern Gasir Benghashir district of Tripoli for over year, operating under the GNA’s defence ministry.

Those clashes left at least five people dead and 33 wounded, according to a health ministry toll, before a truce was reached on Tuesday.

Fighting resumed on Wednesday in the Salaheddin neighbourhood of southern Tripoli, a resident told AFP. He reported machineguns and anti-aircraft guns being fired, which could be heard over the phone.

Overnight the UN Support Mission in Libya (UNSMIL) warned of attempts to "tamper with the security [of] Tripoli and its residents".

"There is no justification for the bloodshed. UNSMIL calls on all to spare lives, stop military mobilisation and allow for mediation," the mission wrote on Twitter.

The UN's plea followed reports that forces from the city of Misrata, 200km east of Tripoli, intended to head to the capital.

Speaking to MEE on Tuesday, Libyan analyst Guma el-Gamaty said: “Tripoli is important because it is where key institutions concerned with budgets and money are located.”

“Some militias are flexing and using their military power to exploit such institutions for financial gains,” Gamaty said, adding that fighting between militias for Tripoli should be seen with this in mind as they are looking to access “easy money”.

Hundreds of migrants have been abandoned without food or water in government-run detention centres in the Libyan capital after guards fled from the clashes in the capital.

Some 400 people were abandoned in the Ain Zara detention centre run by the UN-backed government, one aid worker told Reuters, asking not to be identified.

Ain Zara in southern Tripoli is part of a network of state facilities where Libya holds migrants intercepted by the coastguard while trying to reach Italy by boat with the help of human traffickers.

"There are about 400 people locked in the Ain Zara detention centre, among them 200 men and 200 women and 20 children under five years without food and water," the aid worker said.

"The guards of the centre have fled due the current clashes in the city."

Libya is the main departure point in North Africa for migrants crossing the Mediterranean to Europe, mainly from other parts of Africa. The numbers have fallen since Italy provided the coast guard with more boats and brokered deals with local groups in a smuggler hub last year.

Renewed clashes come less than four months ahead of planned elections later this year. Even as the GNA continues to push for elections to take place, it remains unclear whether authorities will be able to guarantee freedom of speech and freedom of assembly in the run up to the vote.

Rights groups have warned against rushing into polls while violence prevails in the country.

Libya’s national electricity company warned of a possible “total blackout” following the clashes, which it said hit part of its network.

Power supplies in the city are already rationed. As temperatures in the oil-rich country reached 46C degrees last month, most of the western area was plunged into darkness for periods lasting as long as 14 hours in some cities, sparking protests.

"Our houses are just too hot this time of year," a Tripoli resident, Maha Abdullah, told MEE.

"We have no choice but to take the children to the beach. At least that way they can cool down in the water, and the temperature is slightly lower right by the sea." Libya Crisis
Battle for bandwidth: in Libya's Sirte, radio is being used to heal the trauma of war