The group's previous leader was killed in a strike east of Damascus last week, prompting reports the group would end negotiations A rebel fighter with Jaish al-Islam at a training session in rebel-held Eastern Ghouta, near Damascus (AFP)
By
MEE staff

The new head of a key rebel group in Syria has denied that it is pulling out of peace talks after its previous leader was killed in an air strike last week.

Zahran Alloush was head of Jaish al-Islam, and was killed in a strike east of Damascus that was launched on Friday by forces loyal to President Bashar al-Assad, with conflicting reports indicating that the plane might have been Russian or Syrian.

Immediately after the killing the group announced that it would be pulling out of a negotiations council formed during an opposition conference in Riyadh earlier this month.

However, in his first public statements since taking over leadership of the group, Abu Hammam al-Buyedhani said Jaish al-Islam’s stance on negotiations “has not changed”.

“We will not adopt a position on our own without discussing it with our partners.”

The United Nations has set 25 January as a target date to begin peace talks on Syria.

The UN envoy to Syria, Steffan de Mistura, said on Sunday that “developments on the ground should not be allowed to derail” progress towards bringing government and opposition delegates together round a negotiating table in Geneva later this month.

The Syrian government has said it is prepared to join the peace talks in Geneva, but that it rejects the Supreme Negotiations Council formed by Jaish al-Islam and other rebel groups during the Riyadh conference. 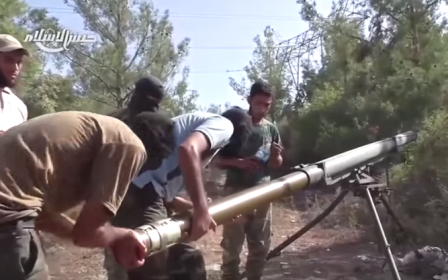