A new allegedly left-wing group called the People’s Resistance Movement made its official debut in Cairo via Facebook on Thursday, the first anniversary of the 14 August crackdown, which claimed the lives of at least 1,150 protestors according to a recent Human Rights Watch report.

A 14-minuted recorded video statement, read out by an anonymous man dressed in black and with a digitised voice, conveyed the group's aims to redeem Egyptians’ right to freedom, establish social justice and ensure retribution on behalf of all revolutionaries who have been killed since the 25 January uprisings.

According to their Facebook page, the group aims to resist the oppressive Egyptian military regime using “all means available to them”.

The group announced the consolidation of several resistance groups in Cairo, under the name of the Martyr Mohammed Helmi Group, and promised to carry out further acts of resistance, although it was not immediately clear what kinds of acts the group was considering.

The “purely Egyptian initiative” which aims to “unite the efforts of all resistance groups under one name” warned thugs and military men against committing any assaults and vowed to “do everything in their power to vanquish the Israeli agents”.

The group justifies its presence "in the absence of justice upon those who murdered the revolutionaries for freedom, from the January 25 revolution till today."

They vowed "to prevent the murderers who control the country from gaining access to lethal weapons."

One section of the exiled leadership of the Muslim Brotherhood in Istanbul is now said to be looking closely at the emergence of the new leftist group in Cairo, sources told the Middle East Eye.

Muslim Brotherhood leaders have been in Istanbul since 8 August, launching the Egyptian Revolutionary Council, a group of individuals and organisations of diverse political and ideological affiliations, who according to their Facebook page also share the principles of Egypt's 25 January revolution.

"The mood among the youth is changing. They are not saying we will move to military action, but there is a clear movement to more violent action," a source with close ties to the Brotherhood said.

"They are seeing how the counter-revolution is being fought off, both in neighbouring Libya and how Hamas is resisting the siege, and they are saying that we want to start a Palestinian style intifada in Egypt."

The source explained that the Brotherhood - which insists it only practices non-violent resistance - has kept control of its supporters for a year.

“The Muslim Brotherhood condemns any form of violence; our resistance has always been and will continue to be peaceful under any circumstances,” secretary general of foreign affairs for the Muslim Brotherhood’s Freedom and Justice Party, Mohammed Soudan told MEE.

However, with many of its leaders imprisoned, the source said, there is growing concern that the leadership will not be able to dictate policy for much longer and that they fear being left on side-lined if the People’s Resistance Movement takes off.

Egypt was gripped by demonstrations marking the anniversary of the so-called Rabaa massacre on Tuesday, with a series of small bomb blasts and attacks on government buildings also reported.

“Three policemen have been killed and 38 main roads have been blockaded as clashes between policemen and demonstrators have continued to escalate in Giza and Sharqiyya,” the source also said.

Official media reports insist that only one policeman has been killed, although official Al-Ahram newspaper did said that a car bomb exploded in Helwan, on the outskirts of Cairo.

The People’s Resistance Movement has not taken responsibility for the attacks.

At least six protesters have also been killed in clashes with police, Turkish Anadolu Agency reported.

The mainly-pro Muslim Bortherhood protesters have come out to mark the anniversary of the 14 August Rabaa massacre, where police killed hundreds in an attempt to break up the camp.

According to Human Rights Watch, more than 800 people were killed at the sit in in Rabaa square alone, bringing the total death toll from the ensuing clashes to more than 1,100.

In eastern Cairo's Nasr City district, near the now-iconic Rabaa Square, protesters marched in red-stained shrouds to symbolise the killings and shouted, "The people demand the fall of the regime."

Some carried posters of former President Mohamed Morsi, a member of the Muslim Brotherhood who is currently in prison pending multiple trials on charges, including supporting terrorism, that his supporters insist are fabricated.

More than sixty have been arrested on Thursday for "acts of rioting and violence" in seven Egyptian provinces, a security source said.

Thursday's protests came in response to calls by the pro-Morsi National Alliance for an "uprising" against the military-backed government."

The protests come amid stepped-up security by Egyptian security forces on the main streets and squares as well as key government buildings. The new military-backed authorities, which have ruled Egypt since Morsi's overthrow in July, have also launched a widespread crackdown on secular opposition groups such as April 6. The group was a key force behind the 2011 revolution, but has since been banned in Egypt. 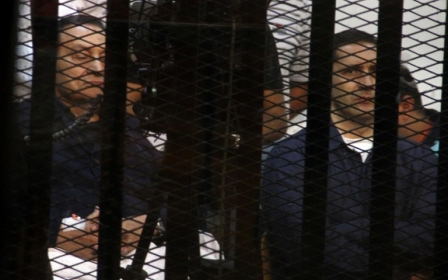