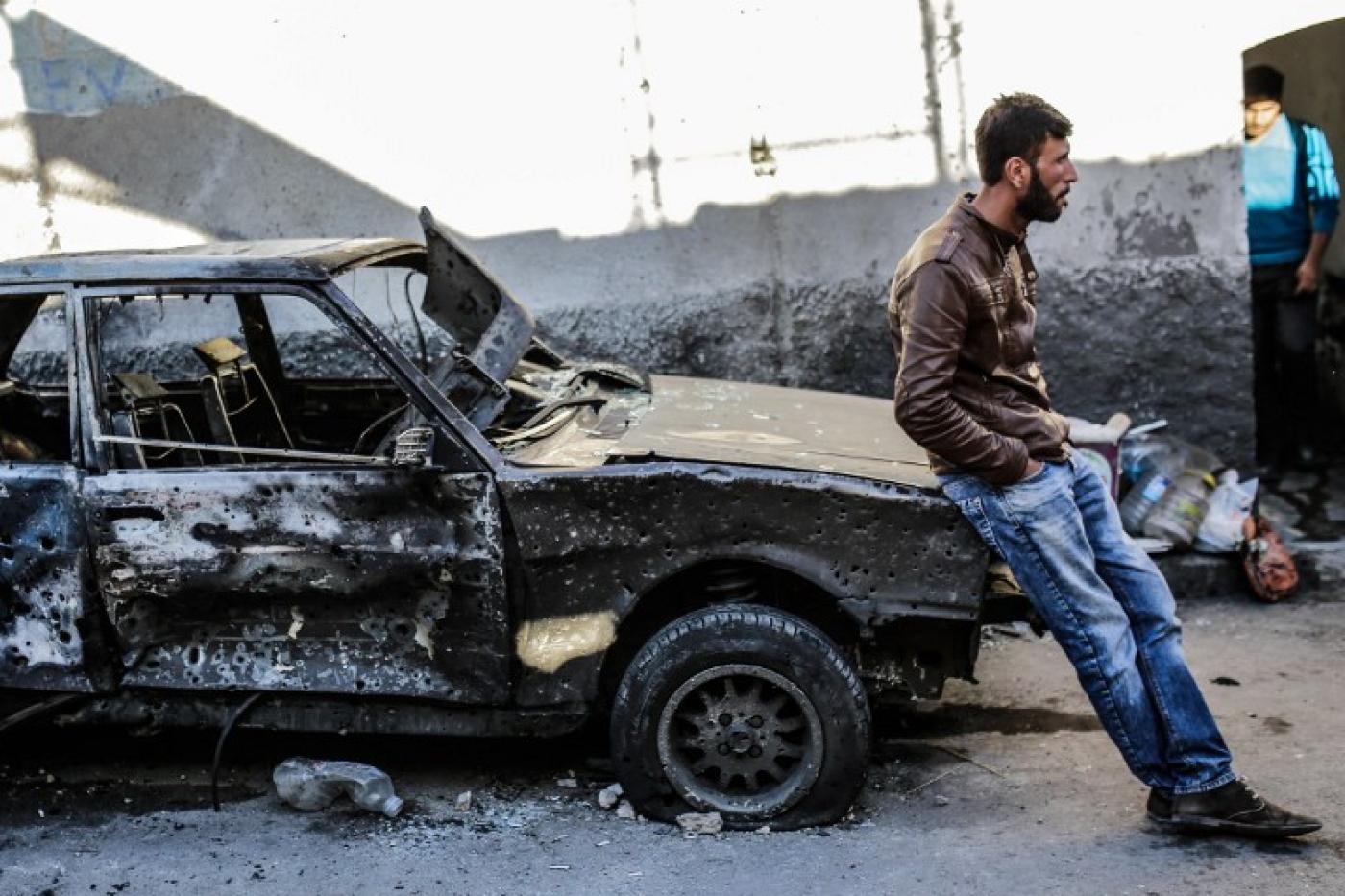 A man leans on a damaged car in Kilis on 25 April, a day after rockets hit the border town (AFP)
By
Lizzie Porter

BAB AL-SALAMA BORDER CROSSING, Turkey - At the Syrian border, Khaled wore an immaculate red-and-blue checked shirt, the collar pressed to crisp perfection as he stood proudly next to his family.

“Life in the camp is easier, better and safer than if we were in town,” said the former construction labourer from Idlib province, referring to nearby Kilis, which has recently been targeted by rockets fired from Islamic State (IS) group-held territory a few kilometres away.

From Khaled's home in the Oncupinar refugee camp, the thump of bombs and the claps of gunfire can be heard from across the Bab al-Salama border crossing.

On the horizon, smoke can be seen from what Kilis locals say are Turkish retaliation attacks on IS rocket launchers in Syria.

At least 18 people, including four children, have died in the attacks, which have also stoked resentment among locals towards the Syrian refugees who now outnumber them.

“I used to try to work a few days a week but it dried up. The overall situation is good for us, but Kilis is not safe,” said Khaled.

Khaled can expect new neighbours in coming weeks: Syrians returned from Europe under a controversial EU deal struck with Ankara.

A new camp has been erected next to Oncupinar in preparation for the new arrivals.

But the omnipresent reminders of the violence from which Syrians have fled are one of the reasons human rights groups and Syrians have criticised the deal.

On Tuesday, the first major deportation of Syrians from Greece to Turkey was confirmed by Frontex, the EU's border agency, with 12 people flown to Turkey from the Greek island of Lesbos.

Most of 390 people previously returned to Turkey from Greece since deportations began on 4 April hailed from Pakistan or Afghanistan.

Six men, two women and four children boarded a plane from Mytilene, the capital of the island where many refugees are currently being detained, to Adana, where they were handed over to Turkish immigration authorities, a Frontex spokesperson said.

Syrians so far returned to Turkey are understood to have been placed in a holding centre in the southern Turkish city, which is a few hundred kilometres from the border camps.

Under terms of the deal, Syrians returned to Turkey will have the same "temporary protection" status as other refugees who have remained in the country.

Previously, any Syrian who left Turkey would lose his or her rights to education, health care and services, but the refugee returns deal has forced Turkey to hastily amend this law for those being brought back.

For its part, Turkey will receive more than $6.7bn from the EU and visa-free access to the Schengen zone for its citizens, while EU countries will take the same number of Syrian refugees from the camp as those deported to Turkey from Greece.

Turkey has claimed – not without reason – that it has outdone all other countries in its welcome of Syrians over the past five years, billing itself “the world’s most generous country".

In brochures from AFAD, the Turkish government department in charge of managing refugee camps, President Recep Tayyip Erdogan is seen kissing a Syrian child alongside his wife and a boy wearing a paper crown, under the headline, "Smiling Faces of Syrians".

In a highly orchestrated trip last weekend, German Chancellor Angela Merkel visited a refugee camp in the southeast. "We would like to listen to them about their needs," she said.

But Merkel faced criticism for avoiding evidence of the dangers the EU-Turkey deal was exposing Syrians to, or seeing the conditions endured by most Syrians in Turkey, who live outside camps.

Merkel had been due to attend an opening ceremony at the Kilis border camp the previous weekend, but the trip was canceled over security fears.

Instead, she visited a long-established refugee camp, Nizip 2, miles from the Syrian border, with Turkish Prime Minister Ahmet Davutoglu.

A small group of Syrians from the Nizip camp greeted the politicians' delegation, while guards stopped members of the media from talking to the rest of the camp's 5,000 residents from Syria penned in behind wire fences.

But the reality of the security situation for Syrians in Turkey is different, according to human rights reports.

Amnesty International this month published research claiming that Turkish authorities had rounded up and expelled groups of around 100 men, women and children from Turkey’s southern provinces to Syria on a “near-daily basis” since mid-January.

The organisation said that many of those returned to Syria appeared to be unregistered refugees, but that it had also documented cases of registered Syrians returned when caught without carrying their papers.

“If the agreement [between EU and Turkey] proceeds as planned, there is a very real risk that some of those the EU sends back to Turkey will suffer the same fate,” said John Dalhuisen, Amnesty International’s Director for Europe and Central Asia.

In a news conference after their visit to Nizip, Davutoglu and Merkel said the EU-Turkey deal had reduced the number of people trying to cross the Aegean Sea to Europe.

But they made no mention of the tens of thousands of people currently stuck in worsening conditions in camps for internally displaced people inside Syria, who have been prevented from crossing into Turkey since the border was closed last year.

Davutoglu said reports claiming abuses by Turkish guards were based on research “that was not really clear”. He insisted that Turkey was “a leader on humanitarian issues and we have heard from Syrian refugees how grateful they are".

The tensions in Kilis are just one of the reasons why the EU and Ankara have faced criticism.

The numbers who will be settled in Europe under the swap deal is at present capped at 72,000 people – according to Turkish authorities, with 78 Syrians having so far been resettled in Germany, the Netherlands and Finland.

Nor is it clear at present what chances of resettlement in Europe the 2.6 million other Syrians – not lucky enough to be part of the “one for one” population swap – currently living in Turkey can hope for.

Turkish government departments did not respond to requests for concrete information on the prospects of full asylum in Turkey for returned Syrians.

For now, they will continue to have “temporary protection” status, but still face low wages on the black labour market, poor housing conditions and resentment.

One Syrian student in Gaziantep told MEE: “The politicians need to have fewer meetings, and talk to the people, not just to each other and the press. They have opened some new centres for families, but what about the children selling tissues in the street?”

The former resident of Aleppo, who asked to remain anonymous, said he understood the difficulties Turkey faced but that there were “stereotypes” about Syrians and discrimination.

“People working in factories here are underpaid and by paying Syrians less, the Turkish people are rightfully angered about that. There needs to be more monitoring and evaluation of the situation.”

Syrians returned from Europe might win places in refugee camps - mostly placed in the poor southeastern provinces, away from Turkey's tourist resorts and developed infrastructure.

In these 26 camps, they are theoretically entitled to accommodation, food, medical care and education. But others may find themselves joining 90 percent of Turkey's Syrian population, who live in tough conditions in privately rented accommodation in towns and cities.

Syrians interviewed in Gaziantep and Kilis explained that they were forced to pay double the rents offered to their Turkish neighbours.

A Syrian might earn $10-$14 a day, while their expenses may be double that, according to individuals interviewed in Kilis.

"There is little or no work here, and no money. Life is very difficult," said Youssef, from Aleppo, who has lived in the border town for four years but saw his house destroyed by an IS rocket fired from Syria on Sunday.

"The refugee camps might be better but it is actually not easy to get into them," he told MEE as he showed the remains of his family living room, covered in shards of glass and rubble. “At least there is no shelling there, but I think I need a reference to get in.”

The attacks from IS have increased resentment towards Syrians in areas where they match or outnumber the Turkish population.

Riots erupted in Kilis at the weekend as locals grew angry at perceived government ineffectiveness. Some locals have blamed the large presence of Syrians – there are estimated to be 120,000 refugees in the town compared to 80,000 local residents – for making Kilis a target.

Syrians interviewed in the town last week reported damage to their cars and private property in a place that was earlier this year nominated for the Nobel Peace Prize for the welcome it gave to Syrians.

Youssef’s brother Zakaria said they felt cursed. “Death follows us everywhere. The [Turkish] people here have a problem with the Syrians because they think we are the reason for this shelling from IS.”

He said that a gang of angry locals had blocked the ambulance taking the injured away from the scene of the rocket attack on Sunday until it was joined by a police escort.  “Why do they do that?”

A group of four women waiting outside the government offices in Gaziantep, which is now home to 325,000 Syrians, echoed those difficulties. “The Turkish authorities do not help us,” they told MEE, waving despairingly at the dirty cream building behind them. “We have 10 children between us and our housing and bills costs nearly $354 a month. There is no work.”

Back at the Bab al-Salama border crossing, Khaled and his family know they have access to services that other Syrians do not: his children and grandchildren go to school, and they have, at least, been given some information about the possibility of asylum in Europe.

He also knows those outside the camp face difficulty finding work, with less provision of services or relatively safe accommodation. His wish is one that is universal among Syrians in Turkey: “Our main worry is the war in our country, and when we can go back.”