Tunisian President Beji Caid Essebsi talks to the press following a meeting with Palestinian President Mahmud Abbas in Tunis on 12 May, 2015 (AFP)
By
AFP

WASHINGTON – Barack Obama and Tunisia's president will on Thursday discuss increased military and economic aid designed to ensure the brightest democratic light to emerge from the Arab Spring is not extinguished by militants or joblessness.

Obama will host President Beji Caid Essebsi at the White House, hoping to strengthen a man who in December became the first democratically elected leader in Tunisia's 60-year history.

In 2011, a desperately disaffected Tunisian fruit vendor set himself alight, arousing pent up anger at failing government and economic hardship that led to popular revolts across the Middle East.

Since then Tunisia has held elections, but has also faced steep security threats, including chaos in neighboring Libya and a March attack on the Bardo National Museum which killed 21 tourists.

With Tunisian youth unemployment running at over 30 percent and the key tourism sector rocked by attacks, experts warn social tensions could again spill over into unrest.

Obama and Essebsi gave a positive assessment of the country's tumultuous recent history in a joint op-ed for the Washington Post released Wednesday.

"Tunisia shows that democracy is not only possible but also necessary in North Africa and the Middle East," the two leaders said.

"Today’s national unity government includes secularists and Islamists, proving that democracy and Islam can thrive together," they added.

US officials say that Obama will outline a range initiatives centred on increased US aid and trade, including an already planned request to Congress to triple military financing.

"Since the revolution, the United States has provided critical economic assistance, including loan guarantees," Alistair Baskey, a spokesman for the National Security Council, told AFP.

"The presidents will examine ways to expand trade and investment between our countries."

"To strengthen US support for Tunisia's security forces and to help them meet evolving threats, we will look to increase military financing assistance to Tunisia next year," Baskey added.

The White House hopes to signal a deeper engagement with Tunisia, which has not always been high on Washington's list of priorities.

It has asked Congress to approve $138mn in assistance for Tunisia next year, which includes $62.5mn in military financing.

A bipartisan group of Senators has written to Obama urging him to be bold about support for Tunisia's democratic transition.

"Many members believe that Tunisia's success is as much a national security priority as US relationships with Israel or Jordan," a Senate aide said, asking not to be named.

Aside from the symbolic value of supporting an Arab democracy, Tunisia also has broader strategic significance according to Sarah Feuer, a North Africa expert at the Washington Institute.

"A failed Tunisian state would only embolden religious extremists across the region," she said.

Tunisia 'a US national security priority'

"Policymakers should not underestimate the implications of such a development, especially given the dangerous tumult that extremist actors are already causing throughout the Middle East and North Africa."

Speaking in Washington on Wednesday Essebsi insisted Tunisia was still in the process of finding its feet and needed more investment to do so.

"If investors had asked to come to Tunisia a year and a half ago, I would not have advised them to," he said touting a package of economic reforms.

Amnesty International has roundly criticised a draft security law that lays down stiff jail sentences for divulging state secrets or "denigrating" the army or police force.

The White House is likely to press Essebsi - an 88-year-old, who styles himself as a protege of Tunisia's founding father Habib Bourguiba - on that issue.

"The presidents will discuss the importance of consolidating Tunisia's democratic progress by building transparent and accountable institutions, strengthening civil society and a free press, and fostering tolerance and inclusion," said Baskey. 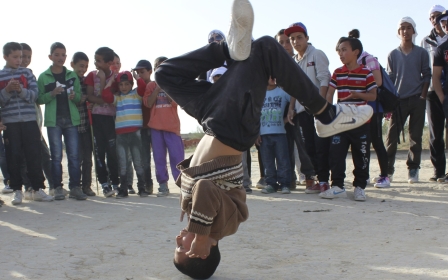 Culture
Festival on the frontline of Tunisia's struggle against militants