As death toll reaches 90 and Gazan hospitals warn over short supplies and staff to help 633 wounded, Obama offers to help broker a ceasefire 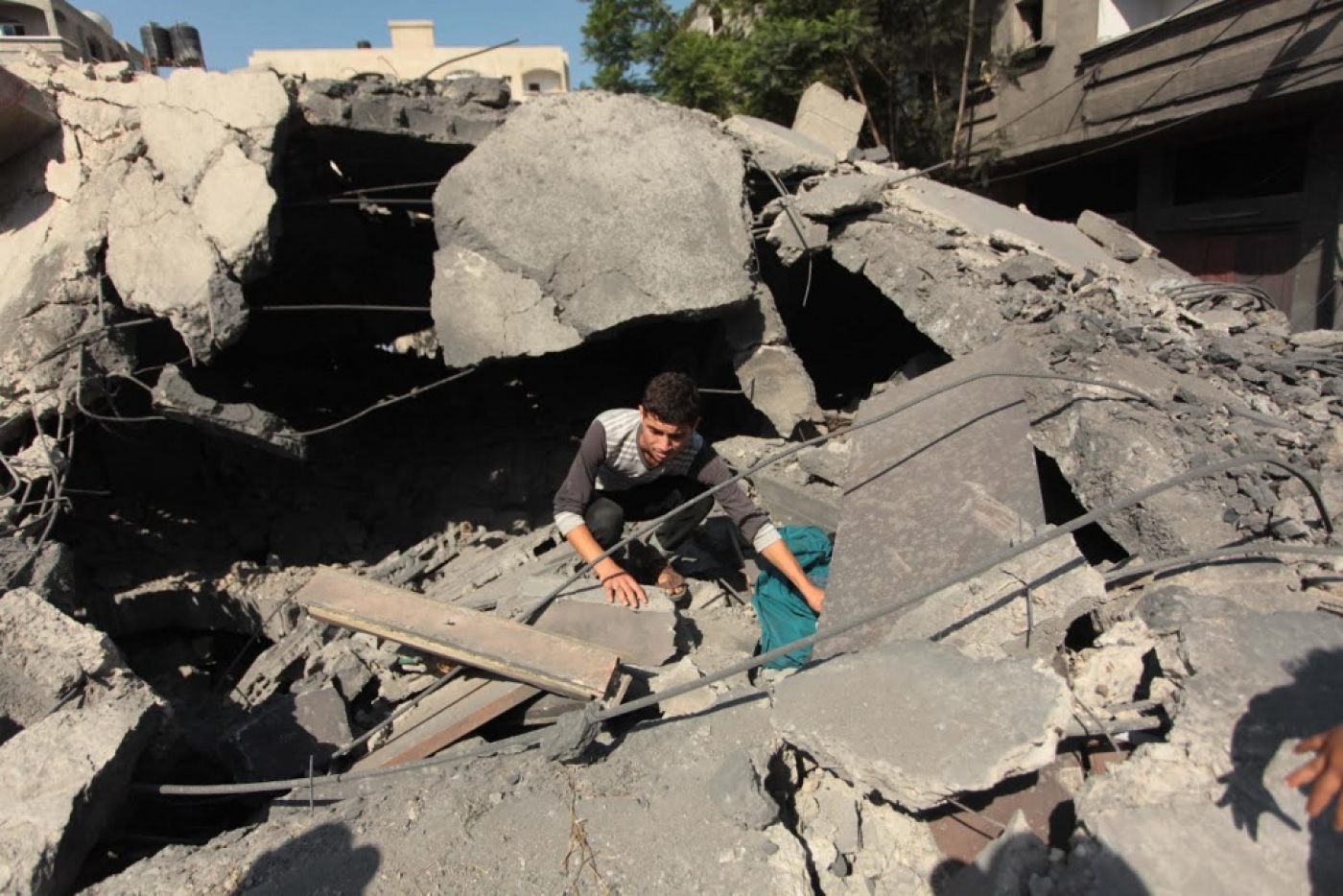 US President Barack Obama on Thursday told Israeli Prime Minister Benjamin Netanyahu he was worried fierce fighting with Hamas in Gaza could escalate, and offered US help to broker a ceasefire.

Obama spoke to the Israeli leader after Israeli warplanes pounded the Palestinian enclave for a third consecutive day but did not stop fighters from firing rockets, and as global concern over rising Palestinian casualties mounted. A short summary of Thursday's developments can be found on Middle East Eye's Gaza Under Attack live blog.

Since the start of the Israeli campaign in the early hours of Tuesday, at least 90 Palestinians have been killed and 633 injured, according to Gaza's emergency services spokesman Ashraf al-Qudra and an MEE contributor in Gaza City. Nearly half of the casualties so far have been confirmed as women and children.

As the number of wounded Gazans climbed on Thursday, medical professionals and local NGOs said they were growing short on supplies and staff.

Doctors, said Dr Ayman al-Sahbani, head of emergency in Al-Shifa hospital, "barely rest and hardly spend time at home as a result of pressure from the work load . . .I don't have petrol for my own car and therefore come to hospital on foot."

With the extra demands on the hospitals, Alun McDonald who works for Oxfam in Jerusalem, said there is a "real risk that medical supplies could run out in the coming week if this continues."

In a statement from the White House said Obama "expressed concern about the risk of further escalation and emphasized the need for all sides to do everything they can to protect the lives of civilians and restore calm."

"The United States remains prepared to facilitate a cessation of hostilities, including a return to the November 2012 ceasefire agreement."

The 2012 deal, brokered by former secretary of state Hillary Clinton and Egypt, ended eight days of Israeli airstrikes on Hamas targets in a previous showdown.

“We face the risk of an all-out conflict in Israel and Gaza. We face an all-out ground offensive unless Hamas stops firing rockets," Ban said.

Ban said Israel has legitimate security concerns "but I remain concerned at the many deaths caused by Israeli operations. Civilians are caught between Hamas’ irresponsibility and Israel’s tough response.”

"My primary concern is the well-being and safety of all civilians no matter where they are," he added.

Following Ban's statement, the Israeli and Palestinian envoys traded barbs, blaming the other side for this week's escalation of violence and asking the UN to condemn and stop their opponent.

"This is an occupation that proves again and again its racist, expansionist agenda without regard for the sanctity of life," said the Palestinian ambassador to the UN, Riyad Mansour.

Mansour urged the Security Council, to which he said he had sent several letters over the past week without response, to send a message to Israel "to stop its aggression and abide by international law."

"The Security Council can't remain paralysed as war crimes continue in Gaza," he said, adding that he rejected the "audacious claim" by Israel that human shields are being used in Gaza.

Ron Prosser, the Israeli ambassador to the UN, said the council must call on Palestinian President Mahmoud Abbas to dissolve the newly formed Palestinian unity government and support Israel's right to defend itself.

Prosser played a recording of an Israeli air raid siren, both during the meeting and then at the press conference afterwards, pointing out that Israelis have 15 seconds to run for shelter during a potential rocket strike.

"Asking for restraint from Israel now is like asking a fire brigade to fight an inferno with a bucket of water," he said.

The Security Council meeting came shortly after Israeli Prime Minister Benjamin Netanyahu warned on Thursday that Israel plans to “expand and continue” its operations in Gaza, saying "we can't do what the Russians did in Chechnya".

Netanyahu's statements, made on Thursday at a lunchtime meeting of the Knesset (parliament) on foreign affairs, come as the official death toll in Gaza reached 81 since the start of Operation Protective Edge early on Monday.

According to Haaretz, Netanyahu was asked repeatedly whether the government had certain political goals and if it had contacted with Egypt or other countries on a cease-fire.

"I am not talking to anybody about a cease-fire right now," Netanyahu told the committee. "It's not even on the agenda."

Israeli Defence Minister Moshe Ya'alon has also backed a further escalation, saying that Israel will “continue to systematically attack Hamas and terrorist organisations and strike them and their assets hard".

“We'll continue until they realise escalation is not worth it, and that we won't tolerate fire toward our communities and citizens,” Yaalon added.

Rockets have continued to fly between Israel and Gaza today, following a heavy night of Israeli shelling which killed more than 25 Palestinians since midnight. The official Gaza Health Ministry death toll has continued to rise at now stands at 81. Nearly half of the casualties so far have been confirmed as women and children.

According to Israeli army sources, there have been more than 320 strikes on Gaza in the last 24 hours, which is almost double the number of missiles launched in the same period the day before.

Gaza has now been hit with more than 750 rockets - the equivalent to 800 tons of explosives - as part of Operation Protective Edge, according to sources quoted in the Jerusalem Post newspaper.

Hamas has also launched an increasing number of rockets into Israel, including several long-range devices, two of which have struck open land near Tel Aviv. Rockets have also continued to fall on southern Israel where they have caused some minor damage and injuries, with alarm sirens heard periodically throughout the day.

However, the Iron Dome system, which is designed to intercept rockets entering Israel, has proved extremely effective, neutralising around 90 percent of all rockets fired from Gaza, Haaretz newspaper reported.

The fighting is now the worst since Operation Cast Lead in 2008 – 2009 when 1,166 Palestinians, mostly civilians, and 13 Israelis, mostly military, were killed.

The international community has thus far been divided on the issue, with few outright calls for a cease-fire emerging as yet. However, the issue of civilian casualties is likely to dominate the agendas and while Israel insists it is trying to minimise civilian deaths, the justification behind several strikes has already been called into question.

Overnight, four women and four children were killed in a raid in Khan Yunis in southern Gaza, while a missile also struck a crowded café in Gaza City where local youths had gathered to watch the Argentina vs Holland World Cup match last night.

Eight Palestinians were killed, and at least ten injured.

“These were just kids – just twenty, twenty-one years old. It was a horrifying moment,” he added while explaining that the café was a well-known hangout among football supporters.

“It is an absolutely safe area, but it is a sign of Israeli frustration that they have not been able to stop Hamas from firing rockets.”

The attack came shortly after a clearly-marked press vehicle, carrying international journalists from Media24, was hit.

Israeli Foreign Ministry spokesperson Yigal Palmor has defended Israeli tactics, telling Reuters that Hamas is firing from “within houses and streets and neighbourhoods which are populated with civilians ... exposing these civilians to retaliation and to backfire."

Israel, however, has now said that the strike on Tuesday that killed eight members of the Kaware family in Khan Yunis was launched in “error.”

There have been conflicting reports about the incident, with preliminary reports claiming that local residents had gathered to form a human shield in an attempt to stop the bombing.

But the Israeli army report on the incident, released late Wednesday, has denied this, instead ruling that the house was hit by a customary warning strike – casually known as an Israeli military circles as “the knock on the roof” - but that the fleeing residents returned too quickly to the site and were caught up in the subsequent attack. Israel claims that it was targeting Hamas member Odeh Kaware.

Hamas have responded to the civilian casualties by vowing to step up attacks and on Tuesday saying that they now considered attacks on all Israelis as legitimate. All intentional targeting of civilians is considered a war crime.

Tensions have been high ever since three settler teenagers were abducted in the West Bank on 12 June and later found dead outside Herbon on 30 June. They reached boiling point a day later when a Palestinian teenager was apparently abducted and burnt alive by Israeli settlers near East Jerusalem.

The incident sparked mass protests in Arab towns and neighbourhood throughout Israel, while Israeli security services continued to crackdown on the West Bank. Since the teenage settlers first went missing, some 600 Palestinians have been arrested, thousands of homes have been raided and several Palestinians killed.

No one has as yet claimed responsibility for the killing. A group of ultra-nationalist Israeli settlers have been arrested for the murder of the Palestinian teen Mohamed Abu Khdeir although three of them have since been released.