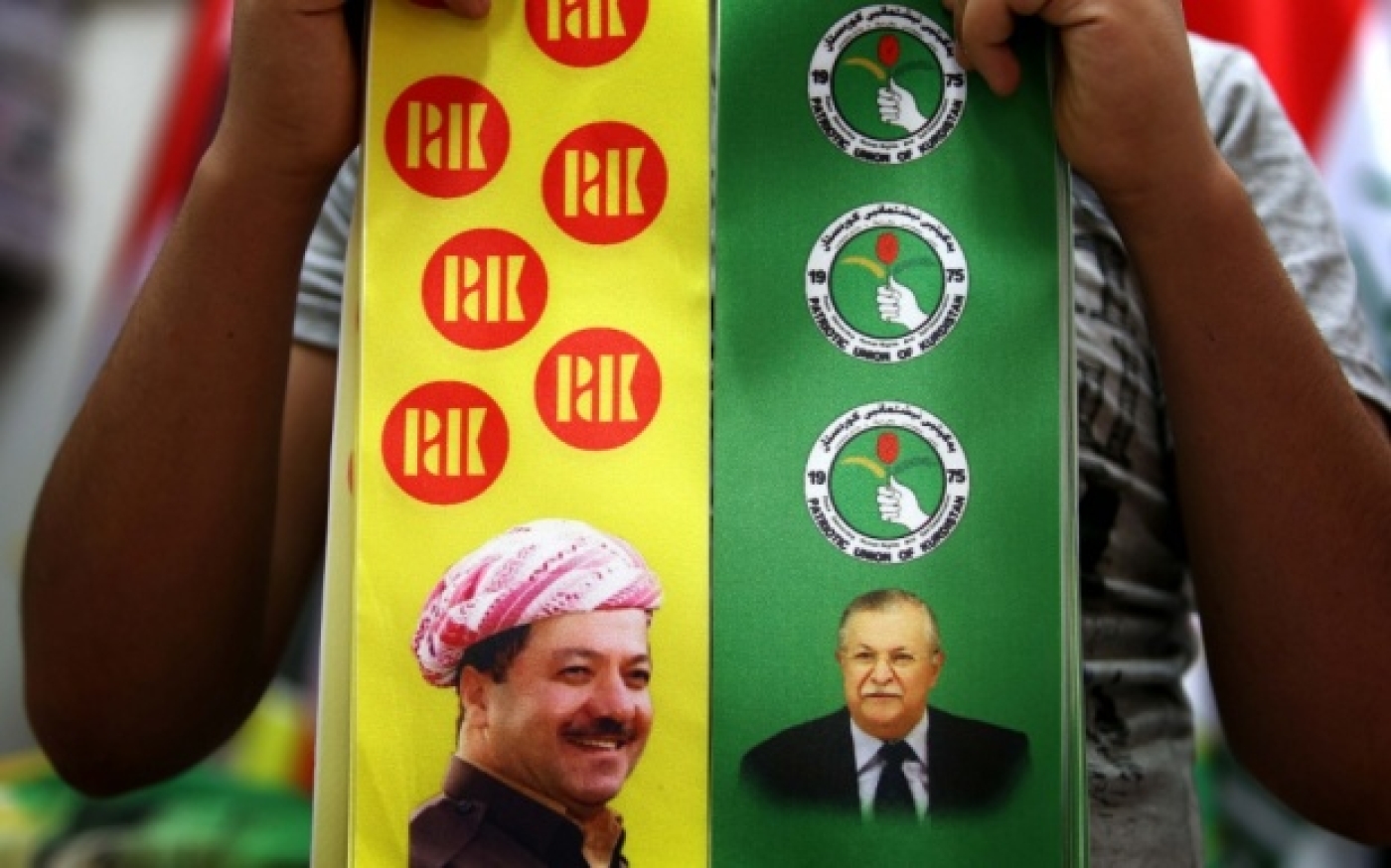 Political problems between Iraqi Kurdish groups in the north of the country and successive governments in Baghdad date back as far as Iraq's independence in 1932. But lately, tensions have reached a new peak.

A period of peaceful co-existence had existed between the Kurdish parties running the Kurdistan Regional Government (KRG) in Erbil and the ruling Shiite coalition in Baghdad since the latter government was formed following the 2003 US-led invasion.

However, tensions started rising in 2012 and 2013, when KRG officials began claiming that its share of the national budget was being reduced by the central government.

The row sharpened in May, when the KRG accused Prime Minister Nuri al-Maliki’s government of withholding the funds used to pay hundreds of thousands of Kurdish government employees, leading to the autonomous region’s most serious banking crisis since its creation in 1991.

On 29 May, Iraqi Kurdistan Prime Minister Nechirvan Barzani targeted the alleged policy in a speech in the Kurdish parliament.

“The Kurdistan Region’s policy from the beginning has been based upon solving outstanding issues with Baghdad. We want to find a solution and reach an agreement. Baghdad’s policies are, however, not reasonable,” said Barzani.

Maliki has denied that Baghdad is withholding the region’s funds.

The Kurdish premier’s remarks mirror widespread dissatisfaction in Iraq's Kurdistan region with what are perceived to be increasingly centralized policy measures by Maliki.

However, oil exports are the principal bone of contention, as while Iraqi Kurdistan has “vast reserves”, the government in Baghdad retains control over how national revenues are distributed.

Following months of rows between Erbil and Baghdad since 2012 over these revenues – exacerbated by the financial crisis in Iraqi Kurdistan - the KRG has started pursuing an independent tack in selling oil.

“Why have we started selling oil?” the premier asked in parliament. “This is so that Baghdad understands full well that we are able to do this.”

After building an independent pipeline with Turkey last December that can export oil directly to the Mediterranean, Erbil further asserted itself in May, dispatching a tanker loaded with over one million barrels of crude from the Turkish port of Ceyhan towards Europe.

On the same day, Baghdad took legal action against the defiant Kurdish enclave in a move that saw the Iraqi Ministry of Oil (MOO) file for arbitration against Turkey and state-owned pipeline operator BOTAS with the International Chamber of Commerce (ICC).

Iraq asked the ICC to cease all unauthorized transport, storage and loading of crude and demanded compensation for the financial damages estimated at US$250 million.

“Requests by the Iraqi side to engage in discussions to resolve the dispute met with no constructive response, leaving the Iraqi side with no choice but to commence arbitration in order to stop the violations,” said MOO in a press release.

While Baghdad maintains that the sales are in breach of the Iraqi constitution, the Kurds have also quoted the constitution to legitimize their move.

However, explains Visiting Fellow at Brookings Doha Centre Luay al-Khatteeb, “you cannot use a constitutional statement in court, you can only use the law validated by that constitution.”

According to the KRG’s Ministry of Natural Resources (MNR), the Kurdish autonomous region has exclusive authority under Article 112 and Article 115 to manage its own oil.

Head of Consulting at Carduchi Shwan Zulal explained that Article 112 is the culprit, citing vague language as the key problem. “This is a constitutional interpretation matter,” Zulal told Middle East Eye.

However, he added: “if you look at the technical side of it it’s about how you share the revenue fairly but the underlining political thread is control.”

Indeed revenue is not a key predicament just yet given the size of the KRG’s current sales. “They won’t affect Baghdad’s oil revenue directly, because the sales are just too small,” said Robin Mills, Head of Consulting at Manaar Energy.

However, according to al-Khatteeb, Iraq’s rentier economy does make it vulnerable to Kurdish sales. “Oil revenue constitutes 98% of Iraq’s income,” he said.

But the real issue is another for al-Khatteeb: “if Baghdad turns a blind eye and deals with the KRG sales as a reality this could impact negatively on other producing provinces.”

In oil-rich Basra, for example, officials have called on Prime Minister Nouri al-Maliki to put an end to Kurdish sales or face the province following suit.

“Kurdish politicians started to chant in support of Basra without knowing that if Basra does the same thing the first to be affected is Kurdistan because all the income is from Basra, the KRG will then have to fight this case with Basra, not only with Baghdad,” said al-Khatteeb.

“Turkey and BOTAS have … facilitated the illegal sale of crude oil that rightfully belongs to the people of Iraq,” said the Iraqi Government in a statement.

“The Kurdistan Regional Government (KRG) has not received the approval of the federal government, so the exported oil is by definition smuggled oil,” said Jihad.

Despite Barzani’s call for Iraq’s State organization for Marketing Oil (SOMO) to observe “every stage of the process”, MNR’s statement appears less flexible in its claim that the KRG does not have to share or account for its own oil exports: “oil export is not an exclusive authority of the Federal Government, it is, in relation to Kurdistan oil and gas produced from new fields, an exclusive authority of the KRG.”

“We have been very careful to avoid causing any problems during the process and we will continue to pay strict attention to transparency,” said Barzani.

However the MNR has yet to disclose the revenue garnered from the first shipment, the oil price per barrel obtained, or the identity of the buyer.

Amidst the legal disputes and political disarray, calls for Kurdish independence have not dwindled. In fact, they are whispered and recently urged on televised interviews by President Massoud Barzani.

But the KRG’s seemingly confident belief that independence is around the corner has been regarded as disingenuous by some and an outright campaigning strategy by others.

“A lot of the talk about independence increased around election season, there’s no doubt that President Barzani believed it to be a vote-winning message more than a political reality,” said Michael Stephens, Deputy Director at RUSI Qatar.

What seems unlikely at the moment is that independence will be created off the back of oil sales. It is estimated that it will take over a year to reach the approximately 660kbdp that would allow the KRG to breakeven with the federal budget after transport costs and oil companies have paid their share.

“The Kurds need to iron out a variety of different issues before they become independent. There are still the disputed territories and oil sources. I don’t think they’re ready,” said Gazwan Aldafai, Middle East Analyst at Cross Border Information.

However, it is not clear how the central government or even Arab Iraqis would respond to a bid to breakup their nation into two.

Divisions between Kurdish rival parties have also put a strain on the KRG, with the Patriotic Union of Kurdistan (PUK) seemingly wary of the opaque exports and accusing the leading Kurdistan Democratic Party (KDP) of selling oil for less than it is worth.

Tensions have also filtered into Kurdistan from abroad with the US backing Baghdad while attempting to unsuccessfully mediate between the two sides. On May 23 the Deputy Assistant Secretary of State for Near Eastern Affairs Brett McGurk tweeted: “the US does not support export of oil from any part of Iraq without the appropriate approval of the federal government”.

Despite the KRG and Turkey’s ambiguous actions, what remains clear is that Iraq’s Kurds have faced a difficult year. “They were put under immense pressure by Baghdad, economically and politically,” said Aldafai.

While it is possible that the KRG chose to wait until after elections in order to deal with a more vulnerable Baghdad (currently in negotiations for a new government) and a post-election political arena in which parties are less willing to burn bridges with each other, the KRG claims to have waited in hope of reaching an agreement with the federal government.

In an interview with Rudaw, the head of the Kurdish Department of Foreign Relations Falah Mustafa said: “No government in the world can survive six months without salaries, so we had to move. This was the most logical thing to do. We have done nothing wrong, nothing illegal and nothing unconstitutional.”