Out of Aden: Yemeni refugees in Djibouti recall horrors of war

Thousands of Yemenis are fleeing in boats across the Gulf of Aden to Djibouti, an East Africa port city where war feels close to home 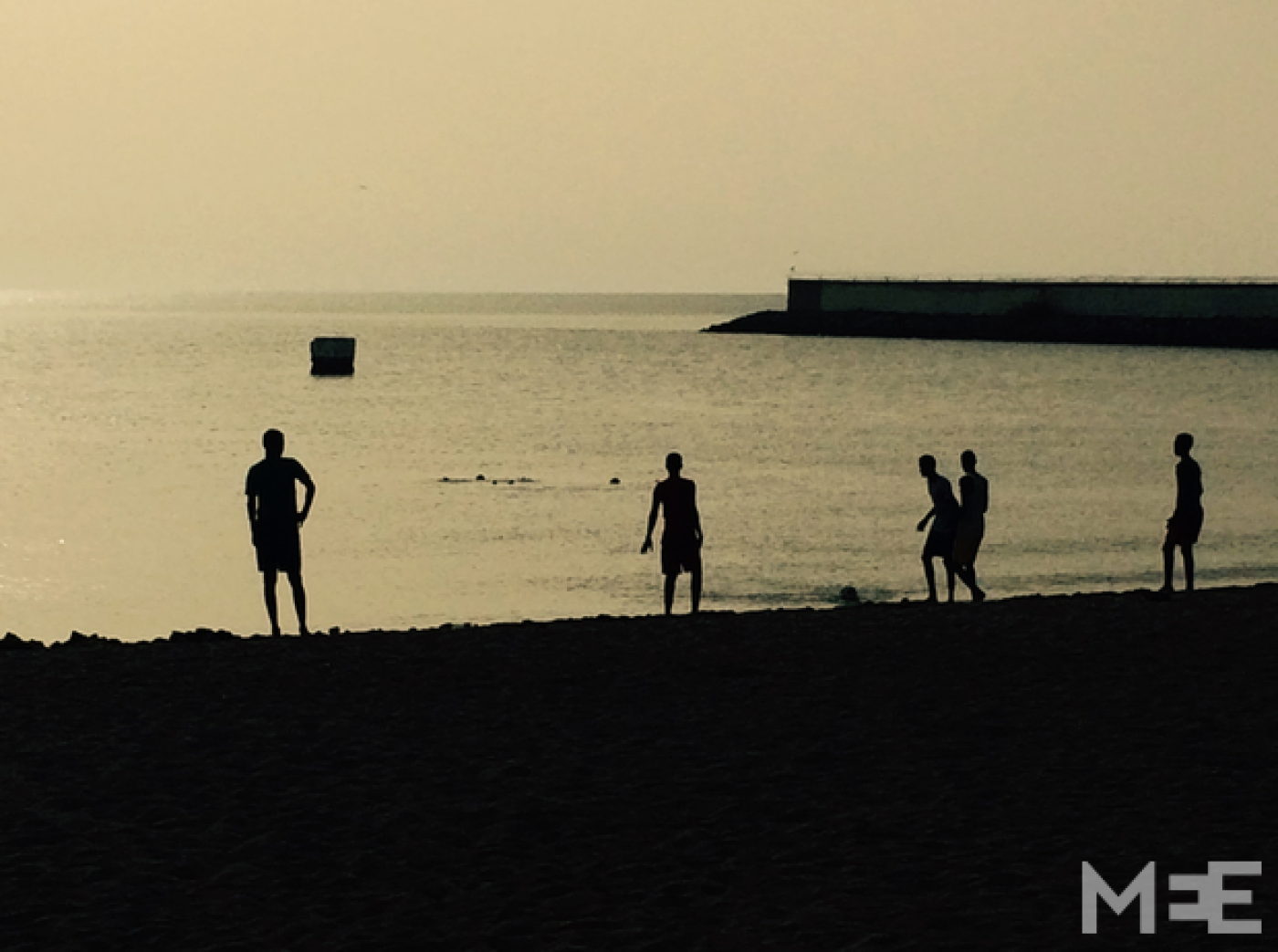 Yemeni refugees play football on a beach near the port of Djibouti, June 14, 2015 (Tom Finn/MEE)
By
Tom Finn

DJIBOUTI - From the balcony of his apartment in Djibouti city, 58-year-old Ali Anwar, who fled the war in Yemen last month, has a clear view of a vast American military base - Camp Lemonnier - which serves as a hub for US counter-terrorism operations in the Middle East and the Horn of Africa.

“Every day I watch them go. 15 or 20 war planes. They fly off after dusk, bomb my country, come back, refuel, then fly off again," said Anwar.

"When I hear those jets I think of Aden, of my friends still trapped in the city," he said.

It's hard to know whether Anwar is right and the planes flying out of Camp Lemonnier are bound for Yemen. The Pentagon releases scant information about the base - America’s only installation in Africa - and who uses it. US embassy staff in Djibouti refuse to comment.

But less than 40 miles away - a ten minute flight - across the waters of the Gulf of Aden, a huge bombing campaign, headed by key US ally Saudi Arabia, is underway. Their target is the Iranian-supported Houthi militia who have seized control of the country.

The US-backed airstrikes, as well as ground fighting and shelling by the Houthis, have torn Yemen apart. Schools have been hit, and neighbourhoods flattened; over a million people have been displaced. Hunger and disease are spreading.

The country is collapsing as tens of thousands of Yemenis flee in boats across the Bab al-Mandeb strait - "Gate of Tears" in Arabic - to Djibouti, a tiny, former French colony with fewer than one million people and high unemployment.

Djibouti’s dusty capital – where US defence contractors in Humvees speed past qat sellers and half-starved Ethiopians – is hardly an inviting sanctuary. But because Saudi has imposed an air and naval blockade, halting flights in and out of Yemen, and nearby countries such as Egypt and Jordan are now refusing Yemenis visas on arrival, the city has become a magnet for refugees.

After decades of people crossing from Somalia and Ethiopia to Yemen in search of a better life in oil-rich Gulf Arab states, the migration flow is being reversed. Arabs, facing war and failed revolutions, are leaving the Middle East for Africa.

Empty streets surround Lootah village, a high-walled property complex on the outskirts of Djibouti city where the families of US embassy staff and Japanese soldiers stationed at a nearby naval facility live in villas with verandas and neat lawns.

With an orange grove, its own convenience store, ATM, and marina with a wooden pier, Lootah village has the feel of a Florida retirement home. That is, until the late afternoon, when the heat drops off and a crowd of Yemeni boys sprint into a yard, kicking footballs.

When the war broke out in Yemen in April, the compound’s owner, Ibrahim Lootah, a wealthy construction magnate from the United Arab Emirates, opened its doors to hundreds of Yemeni refugees.

Today, a crumbling apartment block near the seafront overlooking Camp Lemonnier provides refuge - shelter from the sun, an escape from trauma - to dozens of Yemeni families. At the same time, the camp offers the outsider a window into the complexities and fraught political divisions of Yemen’s failed state.

The inhabitants are various. On the top floor, an army general loyal to former Yemeni president, Ali Abdullah Saleh, who helped the Houthis overthrow the Sanaa government last year, lives with his family in a furnished apartment with air-conditioning and a flat-screen television.

A few doors down, in a flat that has electricity but no running water, a poet from the port city of Aden - whose house was firebombed by the Houthis - lives with a lawyer and his teenage son. Both are members of the Hirak movement which is fighting the Houthis in Aden and demanding an independent state for southern Yemen.

Outside in the heat, under blue plastic awnings strung from trees, are those with no political allegiances who arrived with nothing: a goat herder, a honey merchant, the widow of a man who owned a petrol station.

In a sparse apartment on the second floor, Anwar Ali sits cross-legged on a thin mattress.

“Aden is a broken place, full of death. It’s become like Syria,” he said. “We cannot go back.”

Sitting across from him is his brother, Salem. Both men, in their fifties, are dressed in tracksuits and sandals. They fled last month with their families from Aden after the Houthis and units loyal to Saleh launched a fierce assault on local resistance fighters in the city, some of whom support Yemen’s current, exiled president, Abd Rabbuh Mansour Hadi.

The brothers talk rapidly, firing questions at each other as if they were bullet points on a list: "Could we get a visa to Sweden?" "Does our cousin in London know someone in immigration?" "If the fighting stops will it be safe to go back?"

Thumbing through pictures of Aden on his phone – burnt buildings, starving dogs in an empty street – Ali recalls the day in early April, shortly after the Saudi-led airstrikes began, when the Houthis entered his neighbourhood.

“I opened the door and a man with a gun over his shoulder shook my hand, he said: 'We are here to liberate Aden from al-Qaeda. Tell your people not to target us, if anyone targets us, we will blow up his house.’”

Days later, Ali received a note through the door from a neighbour accusing him and the 500 other members of the Bohra community in Aden of supporting the Houthis. (The Houthis are predominantly Shia). The same afternoon armed men broke into one of Salem’s warehouses.

“People started looking at us differently, calling us Shia, saying we were giving food and supplies to the Houthis,” said Ali.

“Aden used to be a melting pot. Jews, Christians, Sunni, Shia… it was one of the busiest ports in the world. The war changed that,” he said.

As the Houthis laid siege to Aden, blocking roads to prevent flour and fuel from reaching residents and lobbing shells into civilian neighbourhoods, Ali and Salem found themselves arguing over what to do in response.

Ali distrusted the Houthis, seeing the group as violent and socially conservative. When a friend’s hotel was destroyed by Houthi shelling, he considered taking up arms himself.

"There are so many groups fighting now in Aden,” said Ali.

“Hirak, the Muslim Brotherhood, al-Qaeda are there too, and a small group of Hadi’s people. But mostly it’s boys running around with guns and no clue what to do. I realised they couldn't win, they do not have a leader, they are not well-trained,” he said.

Deeming the fight for Aden futile, Ali suggested to Salem that they pack up and flee. 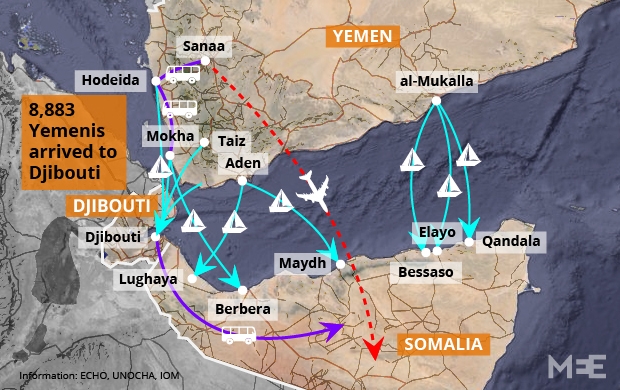 Salem disagreed. He too was shocked by the Houthi’s methods – the indiscriminate shelling and refusal to compromise – but sympathised with what he saw as an attempt by the group to break with the old order and put a stop to the cronyism that had outlived Yemen’s 2011 Arab uprising.

“What they [the Houthis] did in Sanaa... was to turn things upside down,” said Salem.

“I saw them myself. Going to the houses of corrupt politicians, forcing them to pay back money to people they had stolen from,” he said.

“If the Houthis would have stayed in Sanaa, ensured electricity, petrol and security was provided, then people would have supported them, but Saudi's airstrikes made them feel insecure. Now they see it as an existential battle, if they don’t fight back they will be wiped out.”

An outbreak of Dengue fever in Aden two weeks later followed by an airstrike on a house in their neighbourhood finally convinced Salem that it was time to leave.

Boarding a bus with their valuables hidden - the men hid cash in their shoe soles, the women, gold under their veils - the two families snuck across the frontlines to the western port of Hodeida where they boarded a cattle boat with a hundred other refugees and escaped across the Gulf of Aden.

With the sun setting over Camp Lemonnier, Ali Anwar looks out from the balcony. A B52 carrier plane taxis down the runway past a line of armoured helicopters and a circling surveillance radar.

“Whatever America’s involvement, the war is disastrous. The strikes have not stopped the Houthis, in fact they’re expanding. They’ve taken Marib, Shabwah and soon they will take Aden. It’s a mess,” said Ali as the war plane slowed to a halt and pulled into a hanger.

“Imagine now that this war ends, immediately the Houthis will go to Iran. They’ll say ‘hey build us new rockets and places to store them. Send us long-range missiles so that next time the Saudis attack us we are ready to attack them.'" 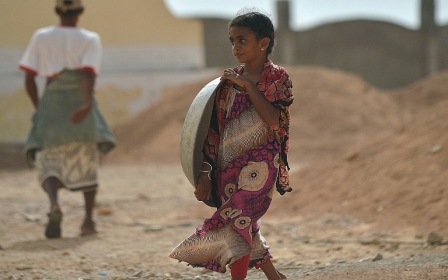