A university rugby club have taken the unprecedented decision to place the Palestinian flag on their rugby jerseys, as a show of solidarity with Palestinians living "under occupation".

Goldsmiths Rugby Football Club said its decision was done to “demonstrate the students’ unions commitment to the boycott, divestment and sanctions movement” against Israel.

A picture on the club’s Facebook page shows members wearing the new kit, which includes a Palestinian flag placed on the shirt sleeves.

The club added: "We're hoping through our collaboration with Goldsmiths Palestine Society this year, we can encourage more societies and clubs to endorse and raise awareness about BDS."

Is campaign 'obstacle to peace?'

Goldsmiths did not condemn the rugby club's decision to place the Palestinian flag on its sleeve.

But a college spokesperson told Middle East Eye that despite the club being independent, it was "disappointing that the rugby club has taken this decision. Sport should be unifying and should be played without borders and by all. No one should feel alienated or excluded."

'Sport should be unifying and should be played without borders and by all. No one should feel alienated or excluded'

Some users on social media described the move by Goldsmiths rugby club as “divisive” and supporting a campaign that is an "obstacle to peace".

Jonathan Fenster on Facebook wrote: "Supporting BDS and Palestinian rights of Jews is anti-semitism period. Goldsmith's, by conflating politics with sport, has shown itself to be racist and a place where Jewish students are unwelcome."

But the college’s Students' Union hit back, saying that it was a "shame that the university's condemnation of the rugby club has so actively sought to undermine the great work of those involved, and the political mandate of the student body."

In a statement released jointly with the Goldsmiths Rugby club, the union likened the club’s move as being similar to the "black power salute" at the 1968 Olympics medal ceremony, as well as the recent actions of American footballers, who have refused to stand for the U.S. national anthem.

"Sport should be unifying and played without borders by all,” said the union “and this is exactly the point of the campaign. We believe that the privilege we have in the UK to play sport without borders is not one available to the Palestinian people, and this action is a reminder."

Goldsmiths Union renewed its commitment to support the BDS movement last year after students submitted a motion to officially endorse the Palestinian campaign.

The decision drew praise nationwide, including  Shelly Asquith, the Vice President of Welfare at the National Union of Students’, who described the decision as a “great show of solidarity with Palestine.”

Representatives from the Goldsmiths Israel Society and Palestine Society did not respond to requests for comment at the time of writing.

The BDS movement was established in 2005 after more than 170 Palestinian organisations, including trade unions, political parties and civil society organisations, called on the world and governments to boycott, divest from and sanction Israel till it complied with international law.

Universities have been a focal point for BDS activism globally, with students demanding that their institutions boycott Israeli institutions, and divest from companies complicit in human rights violations against Palestinians.

The BDS movement has gained much momentum in Britain during the past last few years, including support from the National Union of Students at its last summer conference.

Examples of successful BDS activism on British campuses include numerous institutions divesting from companies like G4S and Veolia. Two years ago, students from King's College London – which is also part of the University of London - successfully campaigned to stop the institution giving G4S a contract worth millions of pounds.

Palestinian flags in sport have been a cause of controversy during the last few months.

In August, Celtic Football Club was fined thousands of pounds after its fans waved Palestinian flags in a show of solidarity with Palestine during a UEFA Champions league match against Israeli side Hapoel Beer-Shev.

Fans raised thousands of pounds in protest against UEFA's decision to fine the club and donated the proceedings to a children's refugee camp in Bethlehem. 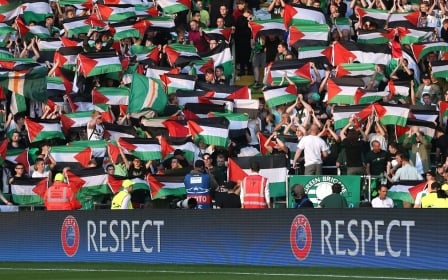 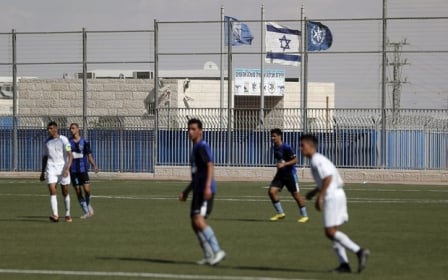