An Israeli court orders filmmaker Mohammad Bakri to pay $55,000 in damages to an Israeli officer in a defamation case, and seizes copies of 2002 film Filmmakers and cinema producers on Wednesday denounced an Israeli court decision to ban the screening of the 2002 Palestinian documentary Jenin, Jenin, three years after a libel and defamation case was filed by an Israeli army officer against the Palestinian director Mohammad Bakri.

Bakri, a renowned actor and filmmaker, was asked by Lod District Court on Monday to pay $55,000 in damages to Nissim Magnagi, an Israeli officer who appears in the film, for defamation, and $15,000 for legal expenses.

All 23 copies of the film will be seized, and it will be banned from screening in all Israeli cinemas.

The film is a set of interviews with Palestinians who lived during the Israeli military invasion of the Jenin refugee camp, north of the occupied West Bank, at the height of the Second Intifada in April 2002.

The 11-day Israeli assault killed 52 Palestinians, including women, elderly and children, and almost 300 homes were razed to the ground by Israeli bulldozers. The Israeli army, which launched a major military operation in West Bank cities in 2002, said that 23 soldiers were killed. “As members of the world’s cinema community, we denounce the Israeli court’s decision to ban the screening and distribution of the documentary film “Jenin, Jenin”, and express our solidarity with its maker, our colleague, the prominent Palestinian director and actor Mohammed Bakri,” they wrote in a petition.

They added that they had received the news of banning the screening of the documentary with “consternation and outrage”.

Bakri said in a short video that since 2002 he has faced ongoing persecution by the Israeli state, government and media. Shortly after Jenin, Jenin was screened in Tel Aviv in 2002, five Israeli soldiers sued Bakri and asked for the film to be banned, but an Israeli court dismissed their case in November 2003.

He said that he is being prosecuted "because I dared to tell my people's story, the people in the Palestinian camp Jenin who were under a very massive attack by the Israeli army."

Human Right Watch concluded in a report that it had found "prima facie evidence" showing that the Israeli army had committed war crimes during its military assault on the Jenin refugee camp. Bakri's film does not use commentary or voice-over but leaves Palestinians to tell their story of 11 days of carnage.

Bakri's documentary is still available to watch on Vimeo.

Magnagi, the Israeli officer who sued Bakri in 2017, said that his "good name has been harmed, his honour has been smashed" after appearing in Jenin, Jenin, standing next to a military jeep with two other soldiers. His case was the second one filed against Bakri for defamation after the first case was dismissed in 2003.

Gideon Saar, the head of the New Hope party and the arch-rival of Prime Minister Benjamin Netanyahu in the upcoming March election, welcomed the ban, saying it "slandered the IDF (Israel Defence Forces) and its fighters”.

Bakri, who appeared in almost 70 movies as an actor, including Wajib in 2017, said he intends to appeal the district court's decision and file a petition in the Israeli High Court.

The filmmaker was born in 1953 in the Galilean town of Biina and is a Palestinian citizen of Israel. 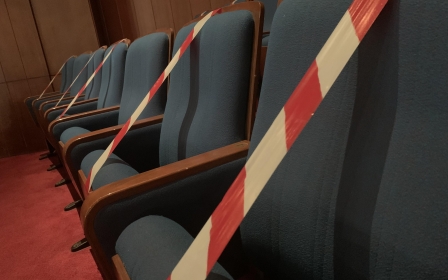