An informal Arab delegation reportedly visited the Al-Aqsa Mosque compound under the protection of Israeli police in the Old City of occupied East Jerusalem on Thursday, according to news outlet Arabi21.

It was reportedly the first such visit to the historic site since Bahrain and the United Arab Emirates signed a controversial US-sponsored normalisation deal with Israel on 15 September in Washington DC.

The delegation performed a prayer inside the 7th century Dome of the Rock Mosque, according to Palestinian sources who spoke to Arabi21.

Middle East Eye could not independently verify the report, which cited sources as saying that members of the delegation declined to respond to questions from locals about where they came from.

The news site reported that the delegation had not been granted permission from the Jerusalem Waqf, the Jordan-managed Islamic endowment that administers the compound, nor did it notified the endowment of its visit.

“May God’s curse be on your sheikh and your big boss, you dirty bastards,” a man is heard saying in a video clip allegedly showing the members of the delegation ascending the stairs to the Dome of the Rock esplanade.

Concerns over the fate of Al-Aqsa

Concerns over the fate of the Al-Aqsa Mosque, one of the three holiest sites in Islam, have risen since the Israel, UAE and Bahrain deals. 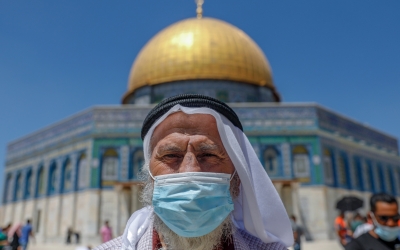 Some right-wing Israeli figures, such as parliamentarian Yehudah Glick, have long advocated the destruction of the Muslim compound to make way for a Third Jewish Temple, as the Al-Aqsa compound is believed by Jews to be built where the first and second Jewish temples once stood.

Israeli settlers have repeatedly pushed for an increased Jewish presence at the site, despite a longstanding joint guardianship agreement between Israel and Jordan - which retains control over Christian and Muslim holy sites in Jerusalem - that bars non-Muslims from prayer at the site.

Israeli ultranationalists, often settlers, occasionally enter the area and attempt to pray there, but are barred from doing so by representatives of the Islamic Waqf. Israeli police usually accompany far-right Israeli settlers touring Al-Aqsa compound.

On 13 August, the United States, Israel and the UAE issued a joint statement which said that "all Muslims who come in peace may visit and pray at the Al-Aqsa Mosque, and Jerusalem’s other holy sites should remain open for peaceful worshippers of all faiths”.

The statement has been interpreted by Palestinians and Jordan as an attempt to change the status quo at the holy site. 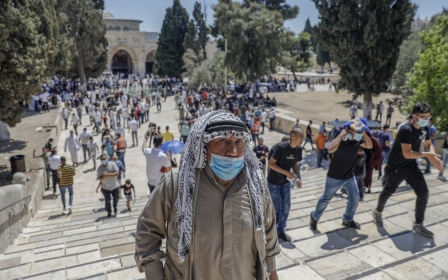 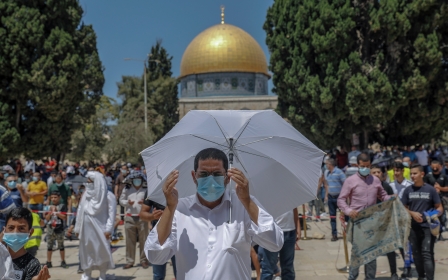