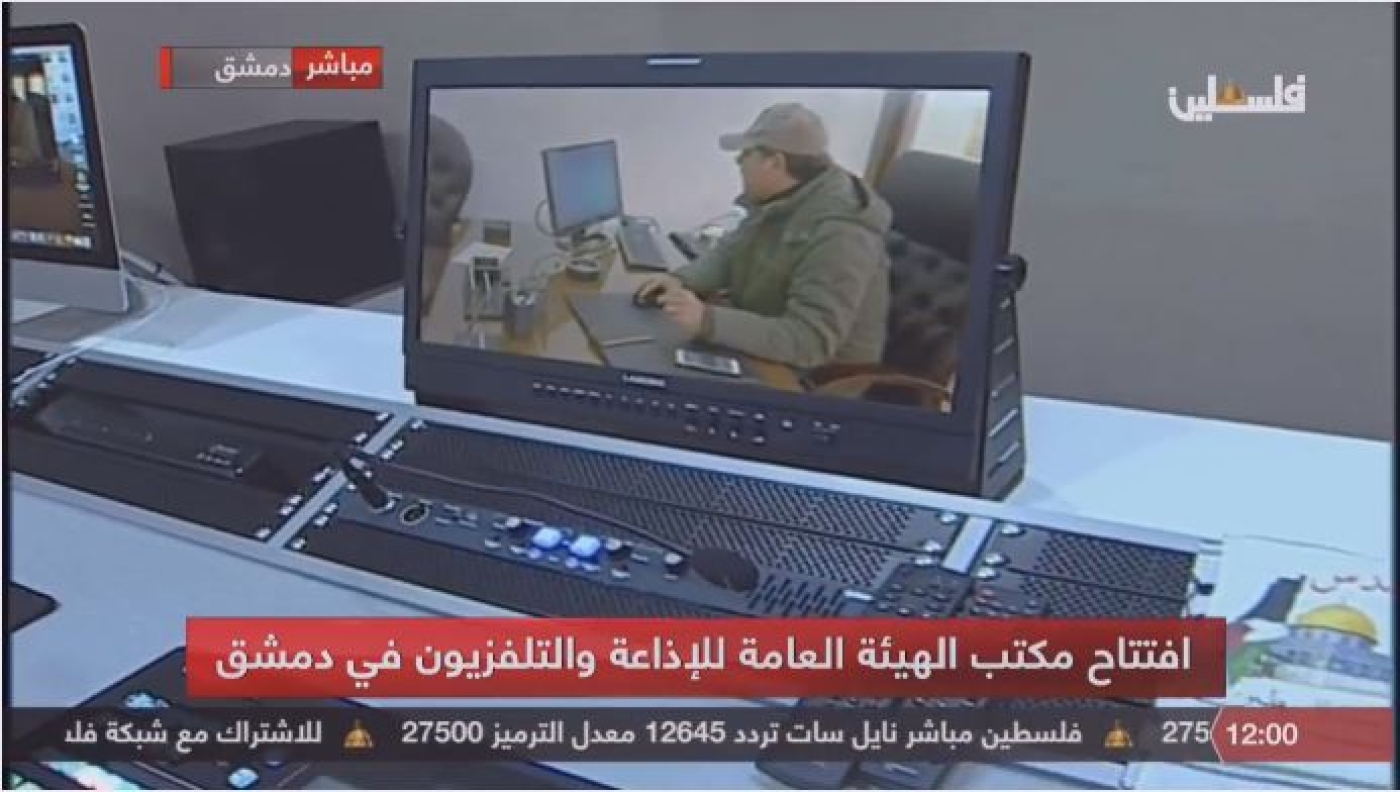 The Palestinian Authority inaugurated the headquarters for its official news channel Palestine TV in the Syrian capital of Damascus on Monday, in a ceremony attended by Syrian and PA officials.

It is the first Palestinian Broadcasting Corporation (PBC) headquarters in Syria. Palestine TV had relied in the past several years on a single correspondent in Syria and outsourced media production.

PA Ambassador to Damascus Mahmoud al-Khalidi described the launch as "a great day in the history of the Palestinian struggle".

Representatives of Palestinian factions including Fatah and the left-wing Popular Front (PFLP) and Democratic Front for the Liberation of Palestine (DFLP) movements were present at the ceremony.

PBC has indicated that it planned to open new offices for Palestine TV in various Arab countries after it recently opened offices in Beirut, Cairo and Tunis.

The Ramallah-based PA did not cut ties with Syrian President Bashar al-Assad following the start of the 2011 Syrian uprising, which was brutally repressed and turned into a nearly eight-year war which has killed an estimated half a million Syrians.

Thousands of Palestinian refugees living in Syria, many of whom fled there following the creation of Israel in 1948, were also killed or had to flee the country.

PA president Mahmoud Abbas has stated that he would like to see the conflict solved in a peaceful way.

The inauguration of the PBC headquarters in Damascus comes as three other Arab countries have officially taken steps in recent weeks towards normalising ties with Assad's government.

Sudanese President Omar Bashir touched down in Syria in a surprise visit in December and met Assad, who welcomed him at the airport.

In December, the United Arab Emirates reopened its embassy in Damascus, which had been shut since the Gulf country broke ties with Syria in February 2012. Nearly seven years later, the Emirati flag was raised again during a ceremony attended by diplomats and journalists.

Just hours after the UAE reopened its mission in the Syrian capital, Bahrain announced that work was "continuing" at its embassy in Damascus.

Middle East Eye reported last week that Israeli, Emirati, Saudi and Egyptian intelligence officials had met in to discuss measures to rehabilitate Assad and curtail the regional influence of Turkey and Iran.

Meanwhile, Damascus has been reportedly revoking the residencies of a number of Western diplomats in an attempt to pressure their countries into reopening embassies in Syria, according to Saudi newspaper Asharq al-Awsat.

Qatar's foreign minister said on Monday that he saw no need to reopen his country's embassy in Syria, nor show any encouraging signs towards a resumption of normal ties with the Syrian government.

"Since day one, Qatar had reasons for which it supported suspending [Arab League] membership and those reasons are still there, so we do not see any encouraging factor," Thani said at a news conference.

Syria's membership of the Arab League was suspended in 2011 over the government's violent response to peaceful protests at the start of the Syrian uprising.

The Arab League, for its part, announced that it did not intend to invite Damascus to attend an economic summit in Lebanon later this month, and that its return to the league depended on Arab consensus.