'He has lost a lot of weight. All that he subsists on is water, salt and milk.' Islam Hamed, a 30-year-old Palestinian, has been languishing in prison for years with no end in sight.

Since announcing his open-ended hunger strike on 10 April, his health has taken a sharp turn for the worse, as doctors last week told his family members that his organs were beginning to stop functioning.

The only difference is that Hamed, who has dual Brazilian citizenship, is imprisoned by the Palestinian Authority, not Israel.

Speaking from the West Bank village of Silwad, Hamed’s wife, Rinan, expressed her worries about her husband’s health to Middle East Eye.

“He has low blood pressure and suffers from jaundice as a result of poor dieting and liver problems,” Rinan said. “He has lost a lot of weight. All that he subsists on is water, salt and milk.”

“His only demand is to be released from prison,” she added.

Rinan also expressed disappointment in various Palestinian human and prisoner rights organisations, such as Addameer, al-Haq and the Red Cross, describing their inaction and their inability to pressure the PA for Hamed’s release as “letting us down terribly”.

Instead, support has come from across the world, from a small community in Sao Paulo, Brazil. Hamed’s mother, Nadia, grew up there and her family, supported by friends and several organisations, have been petitioning and protesting for Hamed’s release for quite some time now.

“We wrote a manifesto, which was signed by tens of organisations and members of parliament,” Baker said. “That was registered twice with the general secretary of the presidency. We have organised sit-ins in front of the government cabinet, organised a public petition, and taken photos with placards asking [President] Dilma to bring Islam to Brazil.”

As a result of these actions, Baker said that the campaign managed to garner the support of members of parliament and the Sao Paulo municipal secretary of human rights, Eduardo Suplicy.

“The federal deputado [member of parliament] Ivan Valente, a member of the Commission of Foreign Relations in the House of Chambers, has sent a request to the president asking for official information on the progress of the negotiations,” Baker added.

Arrests by Israelis and Palestinians

Hamed, allegedly a supporter of Hamas, spent most of his adult life locked behind bars in Israeli and PA prisons. He was first arrested at the age of 18 by Israel in 2002, during the height of the second Intifada. He was sentenced to five years before being released.

In 2008, he was arrested once again and spent two years in administrative detention, held on no charges and without any trial.

After coming home to Silwad in September 2010, he was arrested merely a week later by the Palestinian Authority. Hamed’s list of charges included dissent and his alleged involvement in shooting at a nearby Jewish settlement called Rimonim, where two settlers were lightly injured. He was sentenced to three years.

Despite completing his sentence in September 2013, the Palestinian Authority have refused to release Hamed, claiming that they are holding him for his own security.

In April 2015, Hamed was transferred from Jericho prison to the infamous Jneid prison in Nablus, where torture of inmates - dissidents to the PA - is known to take place.

“Islam was tortured when he was first arrested by the PA,” Rinan said, who has a two-year-old son, Khattab, with her husband. “They hung him next to the window for days, a process called shabeh. They stripped him and forced him to stand in his cell and covered it with cold water.”

The PA intelligence told Rinan and the rest of Hamed’s family that he is wanted by the Israelis, and justified their continued imprisonment of him on the basis of protection.

“We don’t want their protection,” Rinan said. “God protects us, not the PA. My husband just wants proof that he is wanted by Israel, otherwise he will lose years of his life in a PA prison without being charged or tried for anything.”

Hamed’s family contested the PA’s reasons for his continuous imprisonment, citing that if that indeed were the case, then he would be held under good conditions in a facility near to them.

Instead, he was detained first in Jericho prison, near the border to Jordan, far away from the city centre and susceptible to being raided by Israel, as was the case in 2006.

Furthermore, Hamed has spent the majority of his five-year detention in PA prisons in solitary confinement, and is currently held at the Jneid’s interrogation centre, not the prison itself. His cell is sparsely furnished, with one bare mattress and a chair, and the light is kept on 24 hours every day. No electronic devices such as a radio, cell phone or television are allowed in the cell.

PA above the law?

In November 2014, Hamed’s family succeeded in obtaining an order from the Palestinian High Court that demanded his immediate release. The judge ruled that there was no legal basis to the laws that the PA used to justify their security forces arresting anyone on the pretence of protecting them from Israeli authorities.

Yet the PA stalled, and then flatly ignored the order.

“People are very frightened of the PA,” she continued. “They are scared of their torture methods, their prison cells, and their arrests. When they put a young man in a closet for a long time what do you expect the man’s spirit to be like after he is let out?”

The Palestinian Authority has staunchly denied that it has any political prisoners in their cells, despite overwhelming evidence and their close security coordination with Israel.

On 6 May, the spokesperson for the PA security forces Adnan al-Dameri briefly mentioned Hamed’s case in a press conference.

“The continuation of his detention does not stem from our desire to feed him and keep him,” Dameri said. “It’s for his own good as he is threatened with assassination by the Israelis.”

“The PA can’t give us one shred of evidence to prove that if they release him, he will be arrested or killed by Israel,” she insisted.

Hamed is allowed weekly visits from his family and the Ramallah-based Brazilian consulate.

A diplomatic source in Ramallah who wished to remain anonymous told MEE that the Brazilian government is in separate talks with the Palestinian Authority and the Israeli government to try to bring Hamed to Brazil.

“The position of the Palestinian government is quite clear and simple,” the source said. “According to them they are ready to free him as soon as the Brazilian government gets permission from Israel to take him out of Palestine.”

“He is hopeful,” the source continued. “The main concern for the Brazilian government is his health.”

Hamed was taken to the Ramallah Hospital on 11 June after he passed out in his cell. His family accused the PA security guards of medically neglecting him, and transferring him to hospital hours after he had lost consciousness.

“[We] are now demanding Islam Hamed to be immediately released by the PA and following this, taken to the Brazilian embassy in Ramallah for safety until he can be given assurances by Israel to come to Brazil and finally have a new life, alongside his family,” Aline Baker said.

For Hamed, his condition remains precarious. As his health continues to deteriorate, time is running out as the prospect of reuniting with his wife and son remains bleak. 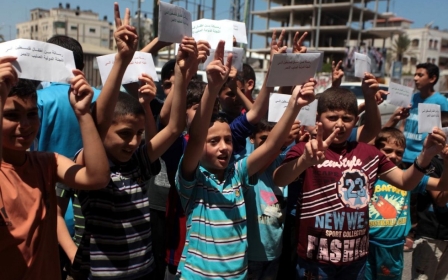 Palestine State
Whither the Palestinian Authority? Occupation
PLO decisions on Israel must be implemented
Sharif Nashashibi