An 11-year-old Palestinian boy was shot dead by Israeli troops in a refugee camp in the southern West Bank on Sunday, relatives and Palestinian medics said.

The Israeli military confirmed its troops opened fire in response to a "violent riot," and said an investigation into the boy's death was under way.

Khalil Mohammed al-Anati had been playing outside his home at one end of al-Fawwar refugee camp, southwest of the flashpoint city of Hebron, when an Israeli unit moved into the area, his uncle told AFP.

"We don't know what they (the Israelis) were doing," said Yussef al-Anati, crying, his shirt soaked in blood after carrying his nephew to hospital.

"Khalil was playing in front of the house, then we heard gunfire. The kid was screaming and fell down," he said. "He was shot in the back and the bullet exited through his stomach."

A medical official confirmed his death.

"A violent riot erupted earlier [Sunday] during an activity in al-Fawwar. Forces opened fire towards main instigators, identifying a hit," the Israeli army said in a statement.

"Initial indications suggest that unfortunately, a Palestinian boy was killed by the fire," it added. An investigation was under way and the circumstances of the shooting were being reviewed, it said.

Dozens of relatives and people gathered outside the morgue where the child's body was taken. The funeral was to be held later Sunday.

The shooting followed two consecutive days of clashes in the West Bank between Israeli troops and Palestinians protesting against Israel's ongoing offensive in the Gaza Strip.

“For all the people in the West Bank, their emotions and feelings are with Gaza," Ghaleb al Bis, the gregarious UNRWA Director of al Amari Camp in Ramallah, told Middle East Eye.

"The thing happening in Gaza is a big thing, like an earthquake, and it is reflected in people here. What's happening there is not war: it's just destruction, it's revenge.

On Saturday, 15 Palestinians were injured in Hebron when troops dispersed stone-throwers with tear gas, stun grenades, rubber bullets and live fire after the funeral of a Palestinian man shot dead by Israeli forces at a protest on Friday.

“The war on Gaza is the reason these things are happening in the West Bank. Like all people in the world we hate funerals, we hate bloodshed. We want to live our lives in peace.”

The Palestinian health ministry in Ramallah says 16 Palestinians have been killed during a series of almost daily protests across the West Bank against Israel's assault on Gaza.

The death of the 11-year-old boy triggered an outcry over social media.

Another day, another unprovoked Israeli child killing in the West Bank that will be swept under the rug http://t.co/fWjlrdgctk ht @ANimer 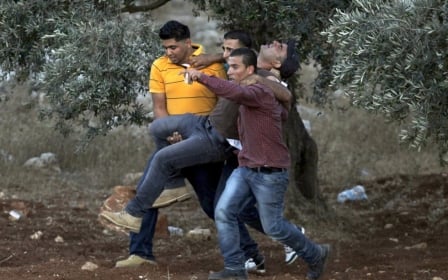