Announcement came after three days of heavy protests against the Palestinian Authority, triggered by the death in custody of activist Nizar Banat 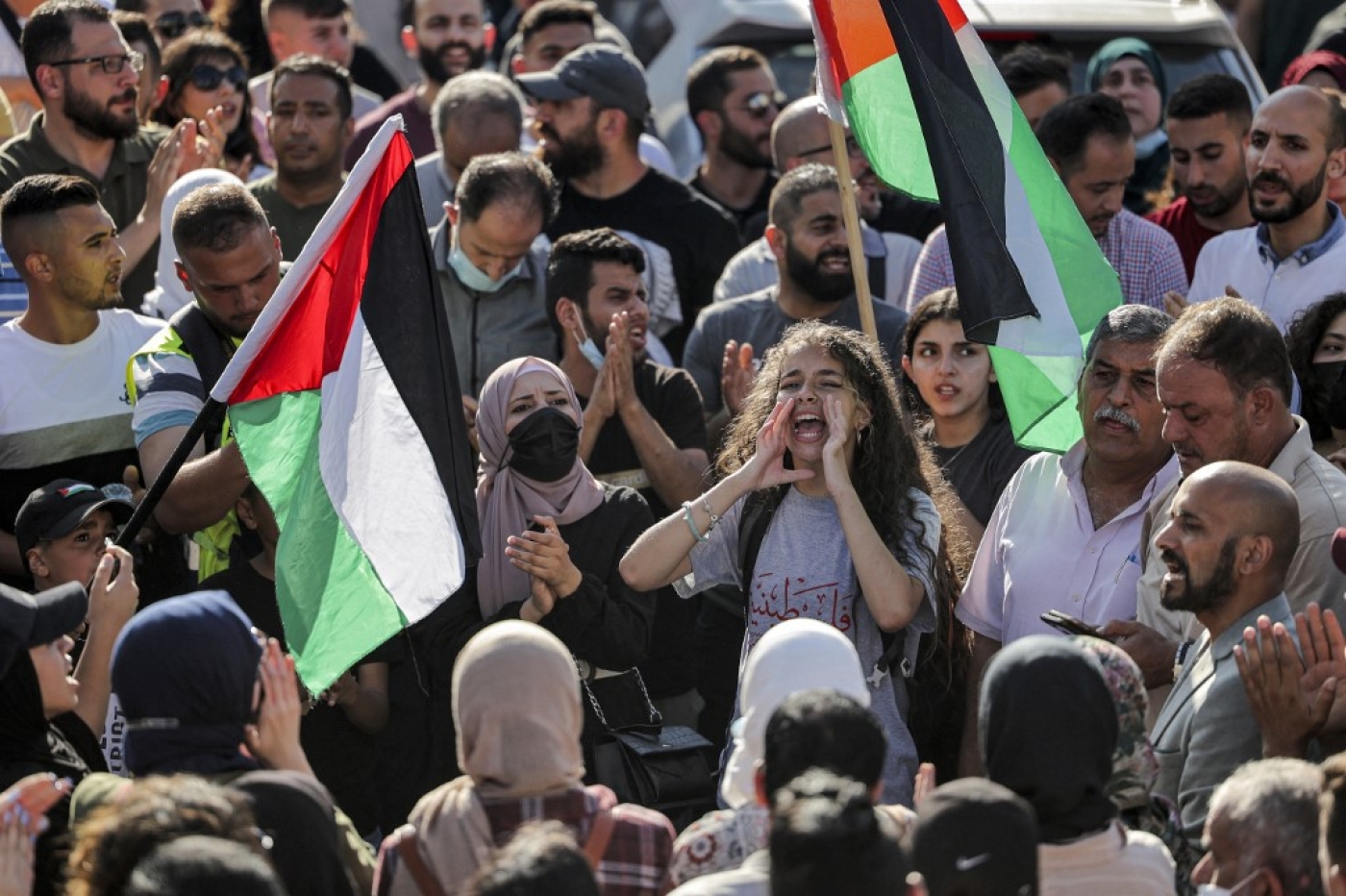 Palestinian protesters gather in the city of Ramallah in the occupied West Bank on 26 June 2021, during a demonstration against the death of human rights activist Nizar Banat (AFP)
By
MEE and agencies

The labour minister in the Palestinian Authority will resign, a member of his party said on Sunday, as protesters marched for a fourth day demanding that President Mahmoud Abbas step down.

The left-wing Palestinian People's Party has decided to withdraw from the Fatah-led PA government due to "its lack of respect for laws and public freedoms", central committee member Issam Abu Bakr said.

Nasri Abu Jaish, the labour minister and the People's Party representative in the government, will therefore resign on Monday, Abu Bakr told AFP.

The announcement followed three days of heavy protests against the Palestinian Authority (PA), triggered by the violent arrest and death in custody of an activist. Nizar Banat, a 43-year-old known for social media videos denouncing alleged corruption within the PA, died on Thursday shortly after security forces had stormed his house and violently arrested him, his family said.

On Sunday evening, protesters defied a heavy deployment of security forces, holding up photographs of the activist as they marched in the Israeli-occupied West Bank, in Banat's home town of Hebron.

In Ramallah, the seat of the PA, protesters demanded those responsible for Banat's death be held accountable, while several supporters of the Fatah Party of Abbas gathered to shout slogans backing the president.

The PA has announced the opening of an investigation into Banat's death, but it has done little to appease anger on the streets.

According to the autopsy, injuries indicated that Banat had been beaten on the head, chest, neck, legs and hands, with less than an hour elapsing between his arrest and his death, pathologist Samir Abu Zarzour said.

On Saturday, protesters in Ramallah hurled rocks at Palestinian security forces and called for 86-year-old Abbas to quit. The PA's forces opened fire with a barrage of tear gas canisters, with reports of several injured.

Among the injured was Middle East Eye's award-winning reporter Shatha Hammad, who was taken to hospital after being struck directly in the face by a tear gas canister.

"It was deliberate," Hammad said. "I was standing with all the journalists in the designated area. They targeted me directly. It was obvious that we were all journalists."

Palestinian Authority security officers shot Middle East Eye journalist Shatha Hammad in the face with a gas canister as they dispersed protests in Ramallah on Saturday.

Hammad was covering a demonstration in Ramallah denouncing the death of activist Nizar Banat pic.twitter.com/xzcZDhgg7T

She said that, before she was hit with the gas canister, officers had been throwing stones at her.

Three other journalists were injured in the crackdown, including Fayhaa Khanfar and Saja al-Elmi, who were assaulted and beaten by security officers. Their mobile phones were also confiscated.

The Palestinian journalists' union condemned the attacks by security forces against journalists covering the protest.

"The targeting of journalists by security men is a new, grave development in the onslaught on freedom of expression and the media," the union said in a statement, according to Reuters.

Banat had registered as a candidate in Palestinian parliamentary elections, which had been set for May until Abbas postponed them indefinitely.

The original mandate of Abbas expired in 2009, and he has since governed by decree.

In May, Abbas declared that legislative and presidential polls set for May and June respectively should not be held until Israel guaranteed voting could take place in annexed East Jerusalem.

In addition to holding the presidency, Abbas is also head of Fatah and president of the Palestine Liberation Organisation (PLO), recognised internationally as representing the Palestinians.

But Fatah faces a growing challenge from its longtime rivals, the militant Islamist organisation Hamas, which rules the Palestinian coastal enclave of Gaza.

The PA exercises limited powers over some 40 per cent of the West Bank, occupied by Israel since the Six-Day War of 1967.

Israel, which controls all access to the territory and coordinates with the PA, directly administers the remaining 60 per cent.