'I thought I was going to bleed to death on the floor,' Mabruk Jarrar tells MEE, describing attack witnessed by his wife and two young sons 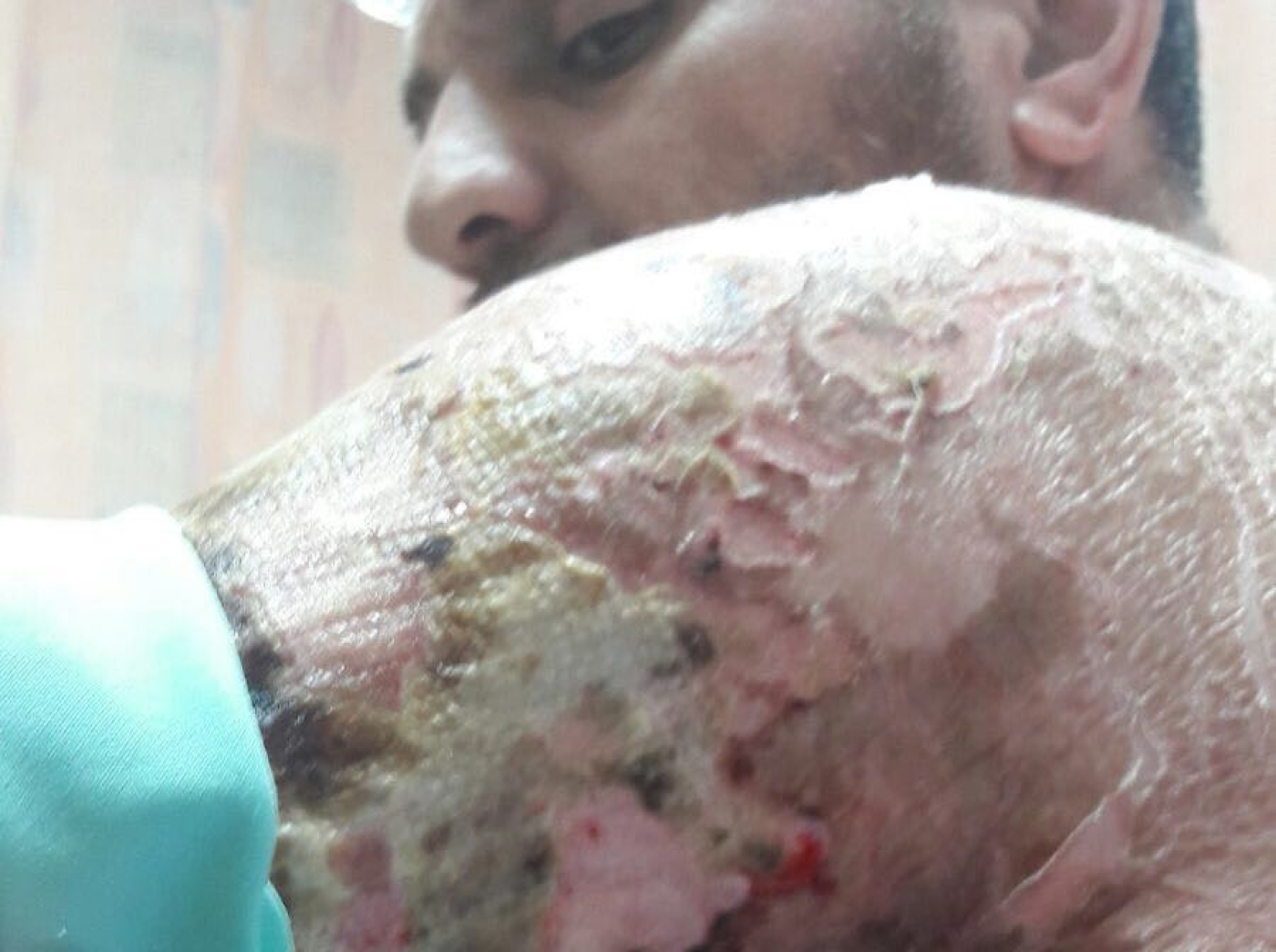 AFULA, Israel - A Palestinian man has described how he was attacked by an Israeli army dog in front of his wife and young children during a raid by soldiers on his home near the city of Jenin in the occupied West Bank.

Mabruk Jarrar, a 39-year-old from the village of Burqin, is still undergoing hospital treatment as a consequence of injuries sustained during the early morning raid on 3 February.

Jarrar and his family appear to have been caught up in raids carried out by the Israeli army in response to the killing of an Israeli settler in a drive-by shooting near Nablus last month.

Mabruk Jarrar is not related to Ahmad Nasser Jarrar, who also came from Burqin and belongs to the same clan, but both he and his two brothers were arrested during the raids.

Burqin and its residents are regularly targeted by Israeli forces, and Mabruk Jarrar was previously held in administrative detention by Israel – imprisonment without trial – between September 2016 and November 2017 without ever learning why he was arrested.

Last month, Middle East Eye also reported on how another member of the Jarrar clan, Ahmad Ismail Jarrar, was also killed in a raid in Burqin carried out by Israeli soldiers searching for Ahmad Nasser Jarrar.

Since his release, Jarrar, who is divorced, had remarried and his wife Enas Shteiwi was also in the house along with Jarrar's two sons from his first marriage, Suhaib and Mahmud, aged nine and five, on the morning of the raid.

"It was almost six in the morning. Enas was still asleep and the boys were in bed in the next room. Suddenly a loud explosion shook the house and we ran to the boys next door to hug them and calm they down," Jarrar told MEE, speaking from hospital in Afula in northern Israel earlier this week where the army had moved him for treatment.

"Israel soldiers had blown out the balcony doors to the first-floor floor room where the boys had been sleeping," Jarrar said. Then another explosion blew out the main entrance to the house.

"Immediately a huge dog came running up the stairs and started tearing at my hand in front of my wife and children. It was impossible to escape from its grip," said Jarrar.

Enas, his wife, tried to shield the children by hiding them behind the bed before running outside to ask for help.

"I was confronted by dozens of soldiers. I started yelling, telling them there were children in the house and that the dog was about to kill my husband," Enas told MEE.

Returning to the bedroom, she found Jarrar bleeding heavily and still struggling with the dog which had bitten him on his arms, legs and back. Unable to help him, she picked up Mahmud in his arms and asked the soldiers to show mercy.

"The dog was still attacking me when one of the soldiers came forward and asked me, 'Where is Ahmad?'" said Jarrar.

"When I said I didn't know he punched me in the face so hard that my nose started bleeding. The dog just kept biting me and it didn't even respond when the soldiers told it to leave me alone."

When the dog finally relented, the soldiers grabbed Jarrar, pinned his hands behind his back and dragged him out of the house before throwing him into the back of a military vehicle where his older brother, Mubarak, had already been arrested and blindfolded. Another younger brother, Mustafa, was also arrested, Jarrar later learnt.

Enas and the children meanwhile had been ordered to sit under a nearby olive tree. One of the soldiers, noticing that the children were trembling, brought Enas a quilt and told her to cover the boys. He also gave them some sweets which he had been eating.

"I thought it was a strange gesture after they had just watched their father being attacked by a dog," said Enas.

Jarrar was taken to Salem prison, near Jenin, despite pleading with the soldiers to take him straight to hospital.

"I thought I was going to bleed to death on the floor," he said.

There, he said, some Israeli soldiers had taunted him, taking photos of themselves smiling and laughing while standing in front of him.

Eventually, after three hours, he was moved to the hospital in Afula for treatment.

Jarrar said he had been interrogated during his detention at the hospital, with his hands and legs cuffed. His detention ended with an Israeli court decision on Sunday, 11 February.

Back at home, Enas was spending the day trying to reach her husband and draw attention to his case. She submitted an application to Israeli authorities to visit him in hospital but did not receive a response.

Not wanting to be left alone in the house, Jarrar's 75-year-old mother, who uses walking sticks to move around, and his sister moved in to keep her company and neighbours helped her install new locks.

But on 8 February, Enas was woken by the sound of soldiers breaking the lock and entering the house.

"They asked us where Mabruk was hiding even though they had been the ones who had arrested him five days before," she said.

The soldiers searched the house and then ordered Enas, her mother-in-law and sister-in-law to go into a bedroom and take off their clothes.

"I was terrified they were going to rape us and I refused," said Enas. "So they brought in a woman soldier to carry out the inspection. It was humiliating and frightening to be searched naked while male soldiers were moving around the house."

After the inspection was complete, the soldiers told Enas that a permit had been issued allowing her to visit her husband in hospital in Afula. This was the same soldier, she said, who minutes earlier, had asked her where Jarrar was.

A medical report issued by the hospital in Afula said that Jarrar had sustained dog bite injuries on his left arm and left leg and also had a suspected broken nose. But it said his injuries would not require cosmetic surgery.

But Enas questioned the accuracy of the report and said Jarrar, who was transferred on Tuesday to a hospital in Rafidia in the West Bank city of Nablus, was expected to undergo surgery and may require at least two operations, including a skin graft to his left arm.

The Israeli army said in a statement that Jarrar was "suspected of conducting activities threatening to the inhabitants of Judea and Samaria" - the Israeli name for Israeli-controlled areas of the occupied West Bank.

It said forces on 3 February followed "standard procedure" and sent a search dog to locate people inside Jarrar's house after they refused a search.

"The suspect locked himself, and his family members, inside a room on the top floor of the building. When the door opened, the dog bit the suspect."

The army said Jarrar was given immediate medical treatment by army medics and then taken to hospital. 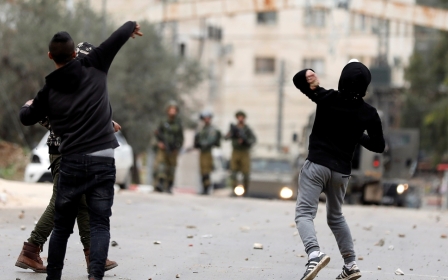 Occupation
From father to son: How the Palestinian struggle is passed from one generation to the next
David Hearst 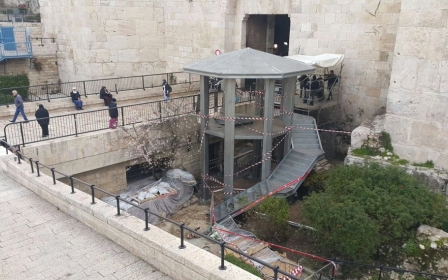 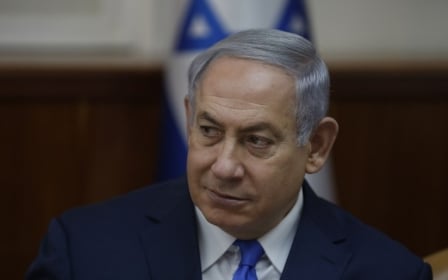