Palestinian schoolgirls stand on the roof of a house in Ammuriya, a village south of Nablus as mourners carry the body of Samah Abdullah who was shot three weeks ago by Israel on 17 December 2015 (AFP)
By
MEE and agencies

A Palestinian teenager was shot dead after allegedly trying to attack Israeli soldiers with a knife in the West Bank on Thursday, the army said, in the latest deadly incident in more than two months of violence.

In a statement, the army said the teenager, later identified as 15-year-old Abdullah Nassara, ran towards the soldiers at a military checkpoint in Huwara, who opened fire, "resulting in his death".

"During routine security activity in Huwara, forces spotted a suspect and approached in order to question him," the army said in a statement of the incident near Nablus.

However Palestinian eyewitnesses contested the army's version, saying the boy did not carry any weapon, and never attempted to attack the soldiers.

Ambulance driver Kamal Badran said the soldiers surrounded the Palestinian, and prevented the medics from approaching him.

Palestinian security sources said Israeli authorities had taken the body of the alleged attacker, a regular occurrence in the ongoing violence.

Members of his family said Nassara had been to school that morning for an exam, which he attended, but never returned.

Later on the same day, violent clashes erupted between Palestinians and Israeli forces after the latter raided Beit Liqya, a town south of Ramallah.

Residents said that the Israeli army had fired rubber-coated steel bullets in addition to live ammunition. Three Palestinians were injured and arrested.

Violence since the start of October has killed at least 120 Palestinians, 17 Israelis, an American and an Eritrean.

Many of the Palestinians killed were alleged attackers, while others have been shot dead by Israeli security forces during protests.

Those carrying out stabbings have often been young Palestinians, including teenagers, who appear to be acting on their own.

Palestinians have grown frustrated with Israel's occupation, the complete lack of progress in peace efforts and their own fractured leadership, while international efforts to restore calm have so far failed.

On Wednesday, envoys of the international diplomatic quartet met senior Israeli officials in Jerusalem and were due to meet Palestinian officials on Thursday.

The quartet groups the United States, Russia, the United Nations and the European Union in an effort to broker an end to the Israeli-Palestinian conflict.

Separately in the southern West Bank city of Hebron, hundreds of Palestinians demonstrated to demand Israel return the bodies of attackers who have been killed.

Hebron has been a flashpoint in the recent wave of violence. In the old city, several hundred Israeli settlers live under heavy military guard among some 30,000 Palestinian residents. 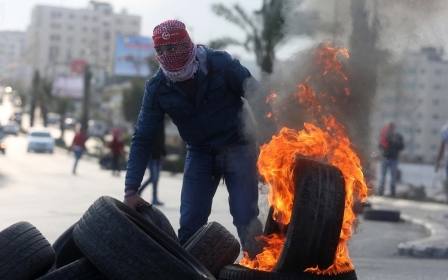