Abbas sent a 'letter of designation' to Hamdallah, president of Nablus' An-Najah National University, on Thursday.

The line-up of the new government, under discussion since late April when the parties announced their reconciliation after a seven year split, had been scheduled to be announced on Wednesday.

But on Thursday, an official in Ramallah speaking on condition of anonymity, said the parties had rejected Riyad al-Malki as foreign minister, something that Abbas is insisting on.

Malki is a veteran diplomat who has served as foreign minister since 2007.

But a source close to Hamas said the party wants the post to be held by Ziad Abu Amr, one of two deputy premiers currently serving under Hamdallah.

The Palestinian official later said the US had recognised the consensus government on Thursday by inviting Hamdallah to travel to Washington.

"The US administration today sent an invitation to the prime minister to go to Washington and meet White House and Congress officials," he said.

Hamas and the Western-backed Palestine Liberation Organisation, which is dominated by Abbas's secular Fatah party, signed a surprise reconciliation agreement on 23 April to end years of bitter and sometime bloody rivalry.

Under terms of the deal, the two sides would work together to form an "independent government" of technocrats that would pave the way for long-delayed elections.

"If this issue is resolved today and Abbas agrees not to appoint Malki, then the government will be announced in the next few hours," the official said. 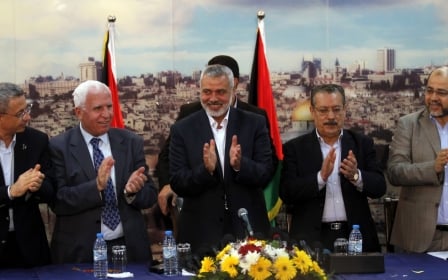