A file photo of Paris attacks suspect Salah Abdeslam, and Zaventem airport in Brussels (AFP)
By
MEE and agencies

Paris attacks suspect Salah Abdeslam says he "didn't know" about this week's suicide bombings at Brussels airport and on a metro train, according to his lawyer.

Asked if Abdeslam, who was arrested last week in Brussels over the Paris carnage in November, had prior knowledge of Tuesday's attacks in the Belgian capital, lawyer Sven Mary said on Thursday in English: "He didn't know it."

Mary also revealed that Abdeslam wants to be extradited to France "as soon as possible" to face charges.

"Salah Abdeslam told me that he wishes to leave for France as soon as possible," Mary said. "I will ask the investigating magistrate not to oppose his departure."

Abdeslam was arrested in Brussels on 18 March and Mary said that he has not cooperated with investigators since the attacks in the Belgian capital on Tuesday.

Asked if Abdeslam had cooperated with the investigators following the triple bomb attack in Brussels, Mary said: "No."

"I don't want him to close up again. If he closes up again, we will be facing more cases like Zaventem and the Bataclan," he said, referring to the Brussels airport bombed on Tuesday and the Paris concert hall struck on 13 November.

Asked what Abdeslam thought of the Brussels attacks, Mary said: "I don't want to know what he thinks. At this stage, it's not important."

Abdeslam, 26, who was shot in the leg during his arrest last Friday in the Brussels suburb of Molenbeek, "is recovering bit by bit from his injury, which was not serious," Mary said.

Investigators believe Abdeslam played a key role in organising the attacks in Paris but appears to have dumped his suicide vest at the last minute.

He was caught after four months on the run, and is being kept in a high-security prison in Bruges in northwest Belgium.

On Thursday police sources told AFP that Belgian authorities are seeking a second suspect over the metro bombing in Brussels in which one suicide bomber has already been confirmed dead.

One source said a man with a large bag had been seen next to bomber Khalid El Bakraoui on CCTV footage at Maalbeek station, where officials say around 20 people were killed in Tuesday's attack.

Another source said Bakraoui was seen talking to a man who did not get into the train carriage with him.

"Investigators want to know who this man is," one source said.

A huge manhunt is already underway for a third attacker at Brussels airport, who was seen on security footage with Khalid El Bakraoui's brother Ibrahim and a man identified as Najim Laachraoui, but whose bomb did not go off.

European security authorities have faced mounting pressure after it emerged that two brothers who blew themselves up at Brussels airport and a metro station were known to police and that one of them had been deported from Turkey as a "foreign terrorist fighter".

The latest bombings, coming four months after November’s attacks in Paris by IS militants that left 130 people dead, have raised fears of further strikes in Europe, which is battling to deal with home-grown militants.

The continent is already fighting crises on several fronts, from its worst refugee crisis since World War II to the possibility of Britain leaving the bloc, and leaders have vowed to combat terrorism "with all means necessary".

EU justice and interior ministers will convene later on Thursday in Brussels for an emergency meeting to work out a plan to address the threat to Europe posed by IS and the application of anti-terrorism laws across the bloc.

Fresh questions were raised over European security when President Recep Tayyip Erdogan said Turkey had arrested one of the Brussels attackers last year and deported him to the Netherlands.

"Despite our warnings that this person was a foreign terrorist fighter, the Belgian authorities could not identify a link to terrorism," Erdogan said.

Belgium's Justice Minister Koen Geens denied however that the 29-year-old Belgian citizen had been flagged as a possible terrorist.

"At that time, he was not known here for terrorism," Geens told VRT television. "He was a common law criminal out on parole." 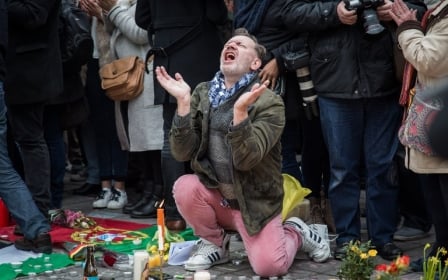