'People are dying': Thousands struck down in Sudan by mosquito-borne fever

At least 11,000 cases of chikungunya and other viral diseases in eastern Kassala state, amid fears epidemic could spread across Nile Basin region 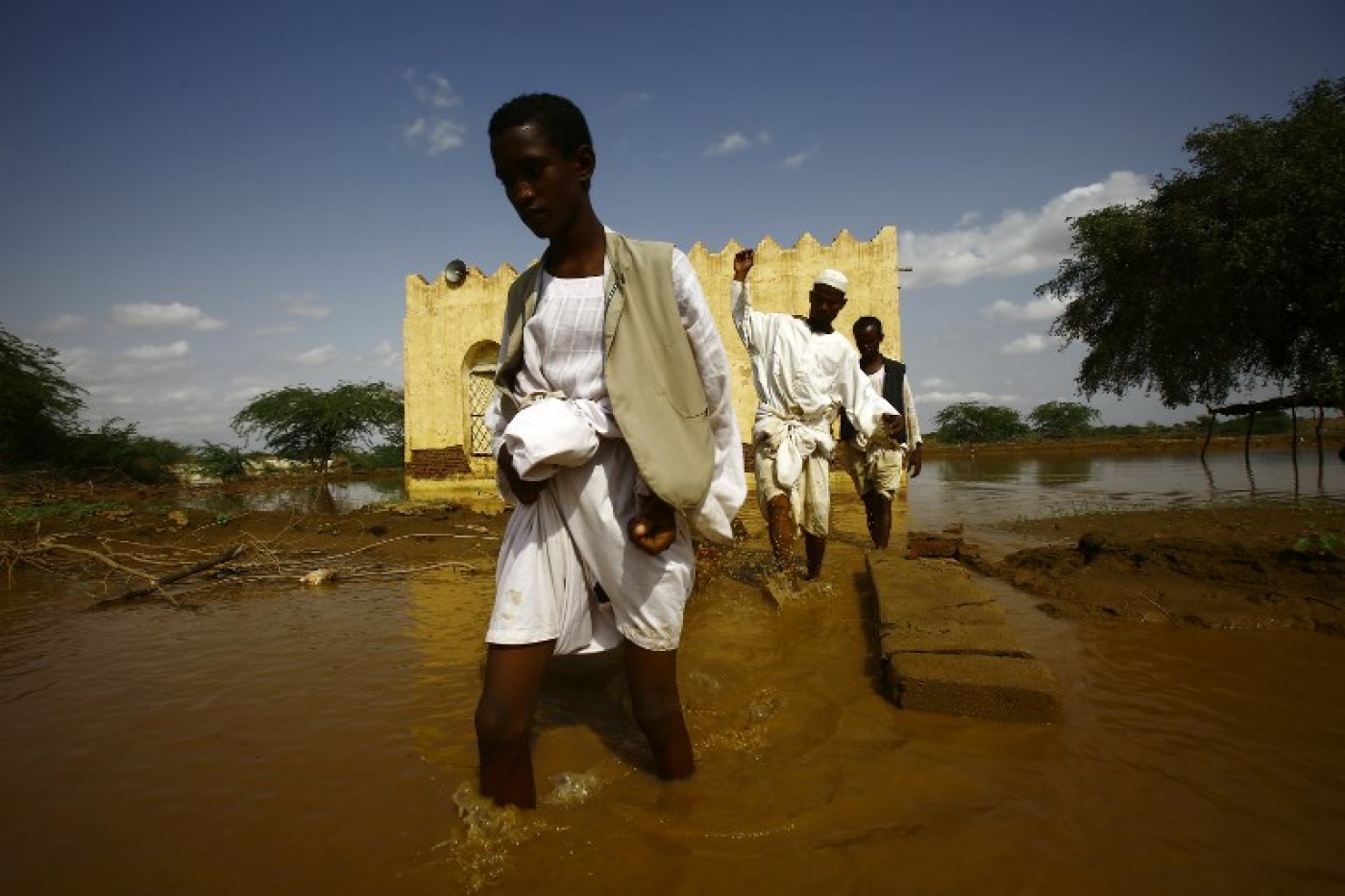 KHARTOUM - Doctors and residents in eastern Sudan's Kassala state have called on the government to declare the area a disaster zone following outbreaks of of multiple mosquito-borne diseases that have struck down thousands of people and stoked fears of an epidemic sweeping the country.

Sudanese officials said on Tuesday that at least 11,000 cases of viral infection - including chikungunya and dengue fever - had so far been reported but insisted that the situation was under control.

But residents contacted by telephone this week by Middle East Eye said that hospitals had been overwhelmed and people were “dying without any care”. They also warned that the diseases were likely to spread to other areas as people fled the region. 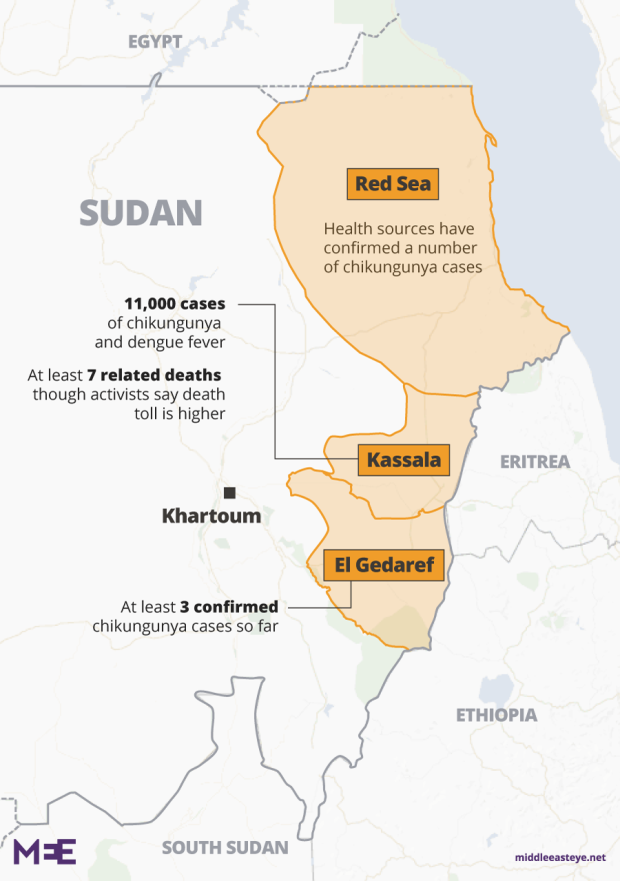 Mohamed Khalil, who lives in Kassala state, told MEE that the situation there had reached “epidemic” proportions, with hospitals already lacking basic medicines and essential medical equipment unable to cope with the sudden influx of patients.

Kassala, which borders Eritrea and is home to about 800,000 people, is already reeling from recent floods and heavy rains in the Nile Basin region that have caused widespread environmental damage.

The latest flooding came just two years after villages were submerged and thousands of homes destroyed by torrential rains that killed at least 100 people across Sudan.

“I can definitely say that the fever now is in each house in Kassala. It’s a miserable situation. The people are dying without any care from the government,” said Khalil, referring to the outbreak of chikungunya fever.

“For me, I have the disease and so do four members of my family. There is no one who can take care of us and the price of the medicines is getting higher because of the shortages.”

Chikungunya is a viral haemorrhagic fever transmitted from human to human by the bites of infected female mosquitoes. The same species of mosquito also transmits other haemorrhagic viruses including dengue fever, which chikungunya is sometimes misdiagnosed as.

It is considered a highly aggressive disease, replicating so quickly that up to one million viruses can be found in a single drop of blood.

Its main symptoms include a sudden fever and joint pain which can last up to several months or even become a chronic condition in some cases. The World Health Organisation says that serious complications are rare but that the disease can be a contributing factor in the deaths of older people.

There is no specific antiviral drug treatment for chikungunya and no commercially available vaccine.

While Adam Gamaa, the governor of Kassala state, said earlier this week that only seven people were reported to have died as a result of the outbreaks, Khalil said he believed the death toll was far higher than the official count.

“I saw myself many people dead in the hospitals and in their homes because of these fevers,” he said.

Another patient from the city of Kassala, Ahmed Abdul Wahab, told MEE that people had started to leave the state. He called on the government to declare the area a disaster zone and close the state to stop the diseases spreading.

“There are shortages of everything and the people of the state have started to leave because they’re scared of the situation. We need help from the government and from the health organisations.”

Meanwhile, youth activists in Kassala launched a campaign on social media under the hashtag #KassalaIsDying to coordinate donations of medicine, blood and other services for the people of the stricken city.

Campaigners said on social media that more than 100 had died because of the outbreak and called on the authorities to assume responsibility for tackling the crisis.

#WHO#MSF
Epidemic outbreak of what possibly be Hemorrhagic or Dengue fever. over 120 death and over 700 Patients in bad condition in Kassala- Sudan.
National and local authorities are refused to acknowledge this situation.
Declare emergency & deploy your teams#كسلا_تحتضر

Very concerned by the fever outbreak in #Kassala that has caused such devastating suffering. Hope increasing attention of Govt of #Sudan can contain the disease and ensure all those affected receive proper treatment.

In a statement, the UK branch of the Sudan Doctors' Union criticised the government's handling of the situation and said that the spread of the disease had become a "threat to the lives of citizens".

"The deterioration of health services and the collapse of infrastructure, the failure of the government to carry out its basic duties in the environment, the drying of water pools, the disposal of mosquitos and flies and the accumulation of rubbish in streets and neighbourhoods has contributed greatly to the spread of epidemics and widespread disease," it said.

Laila Hamad, director of the epidemiology department at the Ministry of Health, told reporters earlier this week that the ministry was controlling the situation and delivering necessary services to patients.

“According to the laboratory diagnosis we made, the current disease is both haemorrhagic and chikungunya fevers, so the ministry is exerting wide efforts to control the situation,” said Hamad.

“We delivered the needed services to the people including free drugs and we also deployed more doctors and medical workers in the state.”

“I visited Kassala and the fever that is spreading in the state is really a big challenge, but the government has put all its capabilities at the service of the state,” Musa said.

Speaking to MEE, the World Health Organisation’s local representative in Sudan said that the WHO had deployed its own teams on the ground alongside Ministry of Health staff to help fight the disease.

“According to the latest reports we received from the Ministry of Health and our teams on the ground there are around 11,000 cases of both chikungunya and dengue fevers,” said Naema Al-Gaseer.

She said the organisation was taking steps to prevent the spread of the disease to other states and called on the government and local communities to tackle environmental and hygiene problems caused by the flooding which had enabled the viruses to spread.

“Now we are working to control the situation in Kassala, we have also deployed our teams in the nearest states of Red Sea and El-Gadaref to stop the probable spread to these states, especially as they already have experience with some fevers,” she said.

“The environment is very contaminated after the floods and rains that hit the country in the past months. We have put all of the capacities of the WHO at the service of the people and are working with the Ministry of Health to stop the appearance of any water-related diseases such as diarrhoea which would complicate the situation."

'The disaster will spread'

However local media reports and activists insisted that the fever had already spread to the two states, with at least three cases reported in El-Gadaref and others in Red Sea state according to the United Nations's ReliefWeb news site.

Idriss Omer, a disaster management expert at the University of Khartoum, said that the outbreak in Kassala was a consequence of the government’s mismanagement of multiple crises faced by the country in recent months - and warned that the situation could deteriorate further.

“Most of Sudan has been hit by flooding and heavy rains recently and the pre-disaster plan should have taken into account the the environmental consequences of that but the authorities didn’t do that. Now the government is downsizing the crisis and that’s an even more serious mistake,” he told MEE.

“If things keep going in this way, the third phase will be more complicated and uncontrollable because the disaster will spread across the country.”