'This place makes me crazy': Refugees in limbo at border with Macedonia

Thousands of asylum seekers are stuck at a ragtag camp on the Greek border, anxious to cross into Macedonia 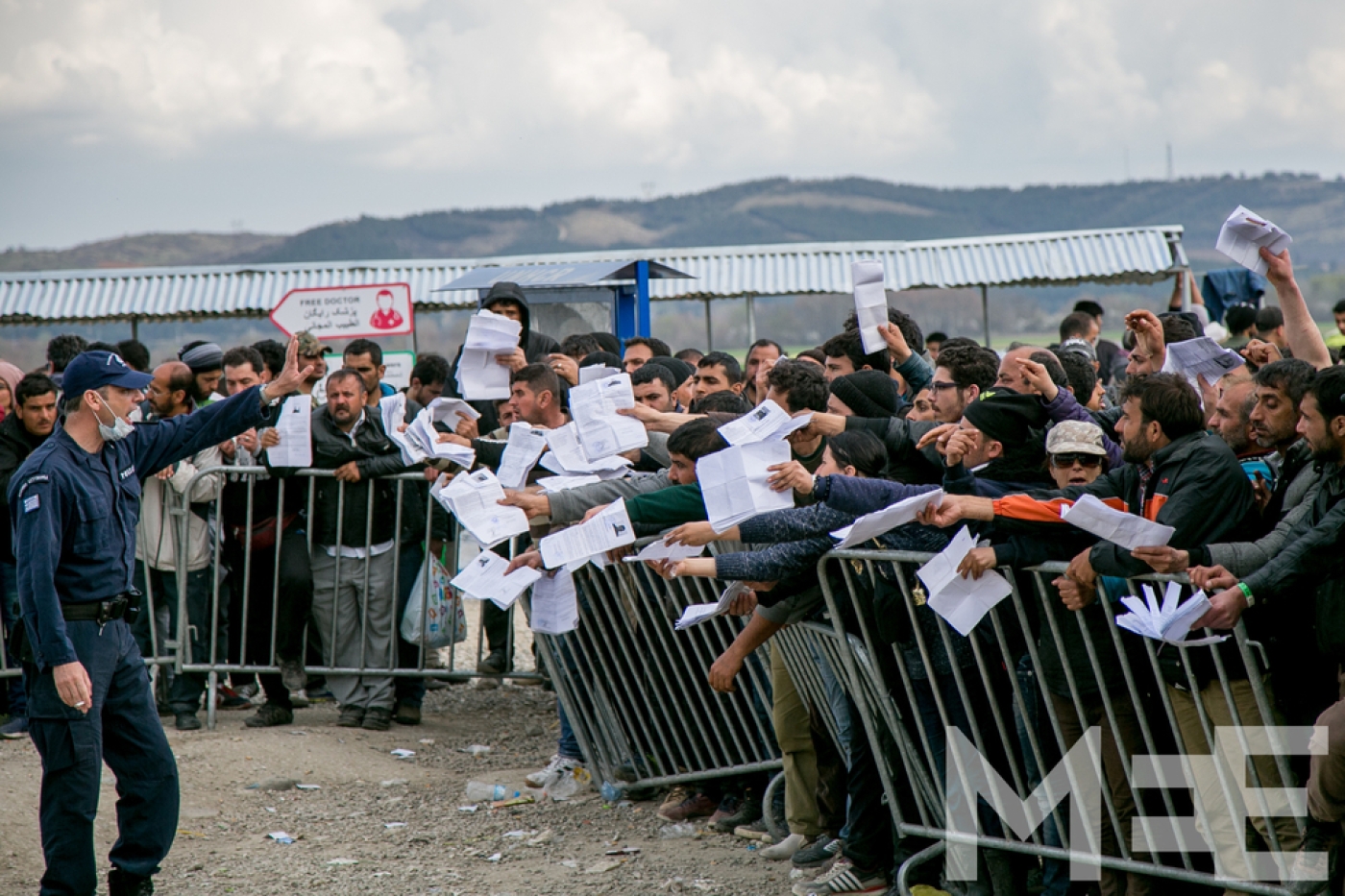 IDOMENI, Greece - “It’s impossible to live here, but it’s what we’re being forced to do,” said Abu Salim Hwala from Damascus, sitting on a bunkbed in a tent that houses 250 other refugees.

Hwala, 23, is one of about 12,000 refugees now stuck on the Greek-Macedonian border near the small Greek village of Idomeni. Stuck in Idomeni for 12 days, he describes what daily life is like in the camp.

“If you want the free sandwiches being given out by NGOs, you have to wait two or maybe three hours. The showers don’t work. Many people become sick and the weather can be very bad.”

His sister Duaa, in the bunk below him, was awoken by the interview.

“I have had the flu,” she said. “I saw a doctor yesterday. If we have to stay here for longer, I worry that my health will get worse.”

Idomeni, which has been the site of a small refugee camp since last summer, made the headlines again earlier this week when Macedonian police fired tear gas at a group of demonstrators who tried to smash through the border fence.

The dramatic and brief scenes, however, did not capture the reality of life at Idomeni: the squalid living conditions, endless hardships, uncertainty about the future and the insipid tedium of waiting here - something not easily broadcast.

And with Macedonia having effectively shut its doors completely, this experience of not crossing the border - of remaining in Idomeni - is the new reality for the thousands of people stuck here.

When refugees arrive at Idomeni, they are given a number. There are about 50 people to each number and they go through the border according to this system. Saleh and his family are number 196, and the handful of people crossing the border today have the number 65. This means there are about 6,000 people ahead of him and his family in the queue.

Abdullah Saleh and his family, who fled fighting in Kirkuk, Iraq, have been at Idomeni for four days so far. As he spoke to MEE, he and his wife, Hanir, and their four children, sat sitting on a small blanket metres from the razor wire fence that marks the Macedonian frontier.

Saleh estimates that it will be about a month before he can cross the border.

Asked how much money he has left for this month, Saleh pulls out a wad of money from his jacket pocket and counts it - 300 euros ($328).

“I don’t know if this will be enough,” he said. Asked if he’ll buy another tent, he responds: “No, it’s too much.”

Currently, even by conservative estimates, about 12,000 people are living at Idomeni - a camp originally designed to house one tenth of that number - and hundreds if not thousands more are arriving each day.

The majority of people here sleep in small and overcrowded recreational camping tents, which are barely waterproof, in heavy rain, while aid groups are struggling to provide enough food. Healthcare is provided by some charities, but it is limited. The UN recently declared the situation in Idomeni a "humanitarian crisis" in the making.

One of the most pressing concerns for people in Idomeni is money: many families enter Europe with a set amount of money expecting to move fairly quickly through countries. Getting stuck in one place for even a few weeks can diminish funds almost completely.

Such basic things such as food, water and accommodation are not covered by charities working at Idomeni. Families often buy their own tents and food. The average cost of staying at Idomeni is about 10 euros ($11) per person, according to many people MEE asked.

“Each family will have about 250 euros ($274) on average when they arrive here,” Abu Salim Hwala said.

“I know many people who have run out of money already paying just for food and water.”

On arriving at Idomeni, Saleh and his family bought a small tent to live in for 25 euros ($27) - but someone stole it, Saleh said. Now they sleep on the floor in one of the UNHCR tents.

“There are many people in the big tent. We have ‘slept’ in there for two nights but there was no sleeping. Everyone was talking - they were stressed. Now every day we are so tired.”

Save the Children’s interim CEO, Janti Soeripto, who was touring the camp on Thursday, told Middle East Eye that the numbers of women and children stuck at the camp have increased greatly in recent weeks.

“We saw the proportion of children arriving in Lesbos go up from 21 percent in December to well over 30 now,” Soeripto said. This creates unique problems and risks, he added.

“We’ve had up to 60 unaccompanied children a week coming to us here in recent weeks, and we’re struggling with child protection and healthcare supply.”

Walking around the camp, one is immediately struck by the large numbers of children and babies, and families constantly lose track of their children.

“I couldn’t keep track of my kids here,” Soeripto says, motioning to the kids around our legs as we push through a crowd. “Could you?”

Yasmin Hafiz, a Syrian who fled Idlib with her husband, two children and mother, arrived at Idomeni six days ago, and the family already has problems with money.

“This place makes me go crazy!” shouts 30-year-old Hafiz over the din of a Macedonian army helicopter circling above.

“I feel crazy here. I’m so tired. Look at us. We can’t shower. We have no money and I don’t know what we will do. Oh my god. This place is impossible.”

Asked what it is like to have to look after children in such a place, Hafiz responded: “They just keep asking me, ‘When will we go to Macedonia?’”

The two children, three and four years old, shouted, “Macedonia!” after they heard the word.

“When they ask when we will leave, I just have to tell them: ‘Soon, soon.’”