'Please don't shoot me': Evidence of a summary execution in Gaza

Members of a family in Khuza'a say an Israeli soldier shot their relative point blank as he waved a white flag, tried to negotiate exit of women and children from home 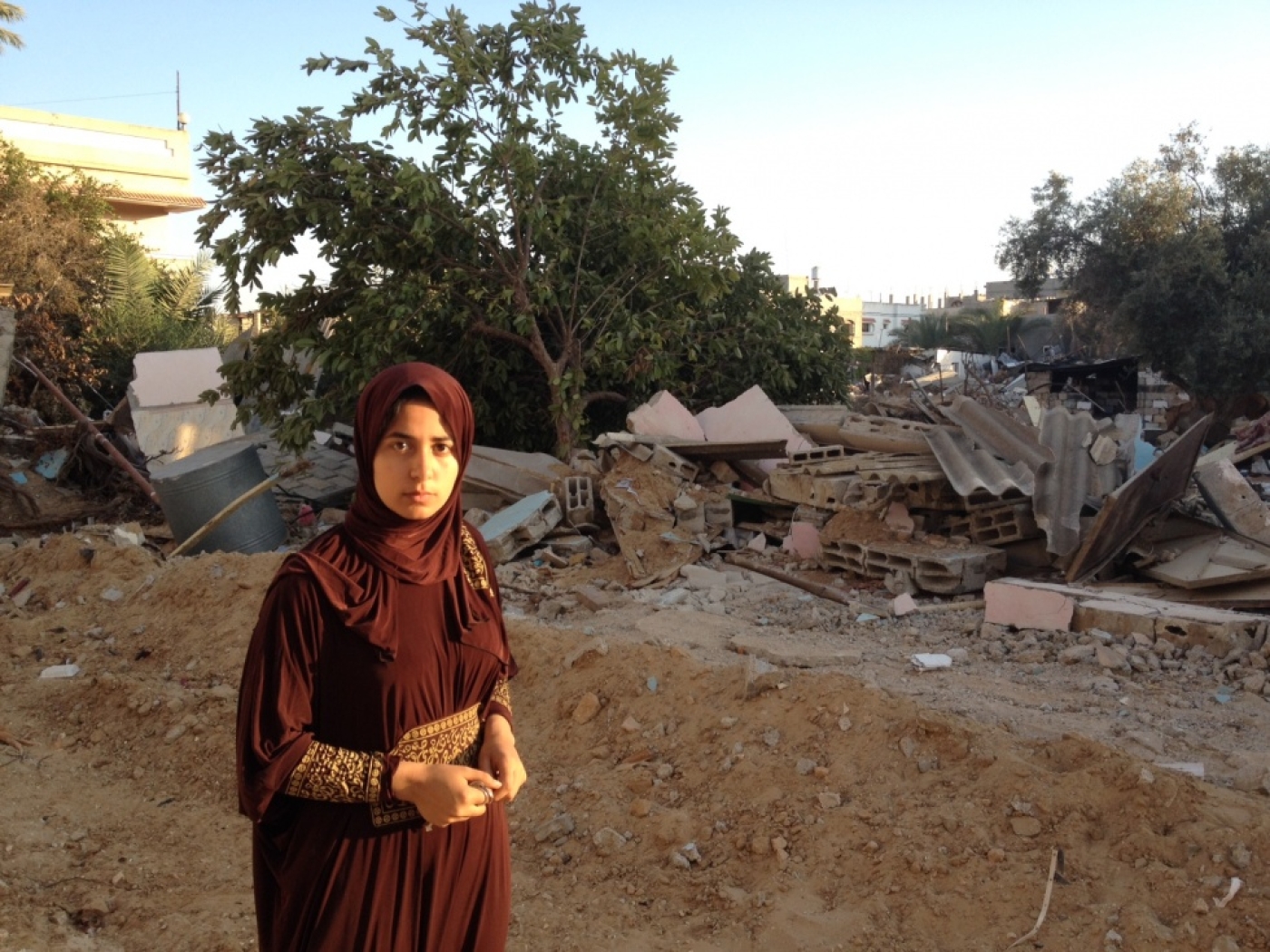 KHUZA'A - Raghad Qudeh had nowhere to run except the home of her uncle, Mohammed Tawfiq Qudeh, 64, who had a basement.

For two consecutive nights, Israeli forces had used all manner of weapons and missiles to hit her family home. "They use pesticides, as if they are just killing insects," Raghad said.

Then on Friday, 25 July, next door to Raghad's house, the home of her neighbour, Helmi Abu Rejela, was hit and the bodies of his family lay under the rubble.

After the bombing, Israeli soldiers were shooting all around Raghad's house. In a moment of calm, Raghad and her family found shelter at her uncle's house, next door.

In his basement, Raghad gathered with 21 members of her family, including her sisters and her mother. No one wanted to leave. Others in their neighbourhood had tried to escape their homes and been injured or killed. Some who were told to evacuate by masked Israeli special forces were killed by snipers at the entrance of the town in southern Gaza.

"We stayed hiding until Friday at noon," Raghad said as tears fell from her eyes. "Israeli bulldozers came closer to my uncle's home, destroying the side and Israeli troops broke into the house."

As a bulldozer then crashed into the home and the family feared that the house would collapse into the basement, soldiers entered the house by breaking down a door.

“We closed the curtains, and were terrified when a bullet hit the door, and voices shouting to us to get out," she said.

Raghad's uncle, Mohammed, told his family he would open the door and talk peacefully with the soldiers, explaining to them that there were only civilians in the house.

“He courageously went outside, with a white flag, just to talk with them saying, 'I am a peaceful man and have only women, children and elderly here'," Raghad said.

Her uncle, Mohammed, usually based in Spain, showed the soldiers his Spanish Permanent Residency card (he also held a resident permit) and spoke to them in English, Hebrew, Arabic and Spanish. He told his family that using the languages would help to avoid any misundertandings.

He moved closer, speaking softly and politely in all four languages.

Suddenly, a muffled shot came from a short, blonde-haired, blue-eyed soldier holding an M-16 in his shaking hands. He was only about 20-years-old, Raghad said.

“I looked the soldier in the eye and his eyes seemed wet," she said.

“My father only said, 'Please don’t shoot us, we are peaceful people'," his 35-year-old daughter, Buthina Qudeh, said in despair. "But the soldier shot him anyway."

Raghad is still in shock. She never imagined Israeli troops would kill an unarmed civilian man.

“I understand them killing a resistance fighter from close range, but to kill an innocent old man who was kind?” she said.

Buthina said, “Usually my dad was a bit tougher with troops yelling at them to stop using offensive, ethnic slurs, but this time he seemed to realise that caution would protect the lives of those in the family with him."

“It was a cold-blooded killing, just a human killed in front of our eyes, without reason," said Raghad, a 1st-year English-Language college student.

Helen Hintjens, a Hague-based human rights lecturer, said incidences during the current war in Gaza like the one described by Raghad, when people shelter for safety and are attacked, remind her of the Rwandan genocide.

"There too women, children, old people and civilian men, not taking part in any fighting at all, were slaughtered in places of safety, churches, hospitals, schools," Hintjens said.  "It is very reminiscent of the genocide.  It looks like another genocide, for all intents and purposes."

'Your bullets forced us to stay inside'

After the soldier shot her father, Buthina said, all three soldiers backed away and threw tear-gas at the family.

Raghad and her family ran indoors, as tear-gas made it difficult to breathe, or even see Mohammed's body.

“Why didn’t you leave the house?” they asked the family.

“'We tried'," Raghad said she told the troops, "'but you were shooting at us, your bullets forcing us to stay inside'.”

Raghad retells the events of that day outside the same home which used to be a small farm with goats, doves, chicken and dogs. All of the farm animals have been killed, their bodies scattered around what used to be a lovely garden amid a stench of dead meat. One can’t tell if this comes from the animals or the human dead bodies next door.

Raghad said she communicated with a soldier in English, explaining why they hadn't left the house, but the soldier who executed her uncle, Mohammed Qudeh, did not say any word. He still had his hands on the gun, ready to shoot anyone.

“I told them, we are children and women—my cousin spoke in Hebrew, I spoke in English and downstairs the children were screaming, in Arabic,” she recounted.

“After they executed my uncle, they told us go,” she said. Ordered by the soldiers, Raghad and her family had to go back to her parent's home, leaving the body of her uncle bleeding with his mouth open.

While Raghad and her family walked home to their house, many of the male members of the family, including Mohammed Qudeh's son, Ramadan Mohammed Qudeh, were kept behind.

For several hours, Ramadan said, the soldiers moved him and other relatives from room to room around the home, using them as human shields as they shot from windows.

At the time, there weren't any fighters returning fire at the soldiers, but the tactic scared Ramadan all the same.

"We could have been killed at any moment," he said.

As Raghad and her family walked back to their home, soldiers standing about two meters away fired bullets around the feet of all children and women, a common practice used to scare civilians.

“We are used to them bombing us from above, demolishing our homes with bulldozers, or firing tank shells—but to break into your home, and execute you in front of your family is something we have never seen -we are simple people, who don’t deserve this," she said.

“There is no humanity in them, they are cruel and heartless," she said while holding tears behind her voice staying strong.

When they returned to her parents' home, the family hid under the staircase, the only place they felt was still safe. Raghad told her dad and everyone to pray and prepare to die from the Israeli bullets.

Suddenly, a bulldozer made a hole in the fence of the home and bullets were fired at the staircase, she said.

A gun came through the hole that Raghad had made to try to see what was happening. A soldier screamed, “Raghad, come here… who is inside?”

"Just my family," she said. The soldier demanded they all come out, one by one.

Her father, in his 60s, was pushed around by the soldiers using the butts of their guns. “I felt so sad for my dad, and old wise man being hit by them," she said.

The family was taken again to the house they were hiding in before. When Raghad asked where her uncle was, the soldiers said they had given him first aid and he was okay. “I felt relieved when they told me he was alive," she said.

The children were screaming, asking for water but two blonde-haired soldiers couldn’t care less about us and refused to let us use toilets or drink water, she said.

"We were held at gunpoint, unable to do anything," Raghad said.

Only one Druze soldier came to them with a bottle of water. Speaking Arabic, he told them to cover their ears from the explosions.

Raghad’s brothers were handcuffed, their eyes blind-folded and they were taken to an unknown area. They screamed to the soldiers, “We did nothing, for God’s sake”, as smoke came out of nearby buildings.

Every time Raghad said she asked a soldier when they could leave and use the toilet, they responded, “Ask Hamas."

One of the soldiers wearing a dark-blue yarmulke told Raghad to say where the tunnels were in exchange for her safe haven. She told him she didn't know anything about Hamas.

“When women were finally allowed to use the toilet, the soldiers came inside the toilets to observe us," she said.

Military dogs passed by the children to scare them, while soldiers refilled guns, making noise similar to the sounds the family heard when their uncle, Mohammed, was shot.

"Someone will come to give you instructions on what to do," a soldier told Raghad and her family.

Moments later, Raghad’s dad, Ramadan, came in and told her, “They have ordered us to leave one way, not look to the side or argue with the soldiers."

“'Please be quiet," Ramadan told his daughter, confirming to her that her uncle had been killed. "Go quietly and say goodbye to him.'”

A final look and a question

All of the children and women ran up to the body which lay in a pool of blood. Some held onto their uncle and grandfather by his phenomenal moustache. They had a few seconds for a final look, some kissing his hands, others kissing his forehead and legs, but trying not to make a sound so that the soldiers wouldn't shoot them.

“I kissed him and told him how very proud I am of him," Raghad said.

The family was allowed to flee, but Mohammed‘s body was left behind. As they left, she lingered to ask one of the soldiers - who spoke in British-accented English - a question.

“Why did you kill my uncle, a peaceful man?” she asked.

“Tears fell from the soldier's face as he turned away," Raghad said.

Another soldier distributed chewing gum to the children which they could not refuse because they were hungry and thirsty “and our lives were still in their hands of the soldiers," she explained.

Raghad, her father and their family - four children, 10 women and six men - walked around 7 km from their uncle's home, passing several dead bodies as they walked through their town. During their walk along roads torn up by Israeli bulldozers, soldiers shot at them again.

“Sometimes the soldiers threatened us, by saying 'You will die on the way'," said Buthina.

Soldiers, she said, lied to her family, saying they had offered her father medical care. His body had not been moved and remained in exactly the same spot, in the same position as when he executed.

“It was a cold-blooded execution of my father, in front of us. He had a huge influence on me and my personality, today," Buthina said.

Outside the house, in the once lovely garden, the body remained for several days and was later unrecognisable when it was brought to Nasser Hospital. It was bloated and bruised, but in better condition than other corpses in Gaza, eaten by insects.