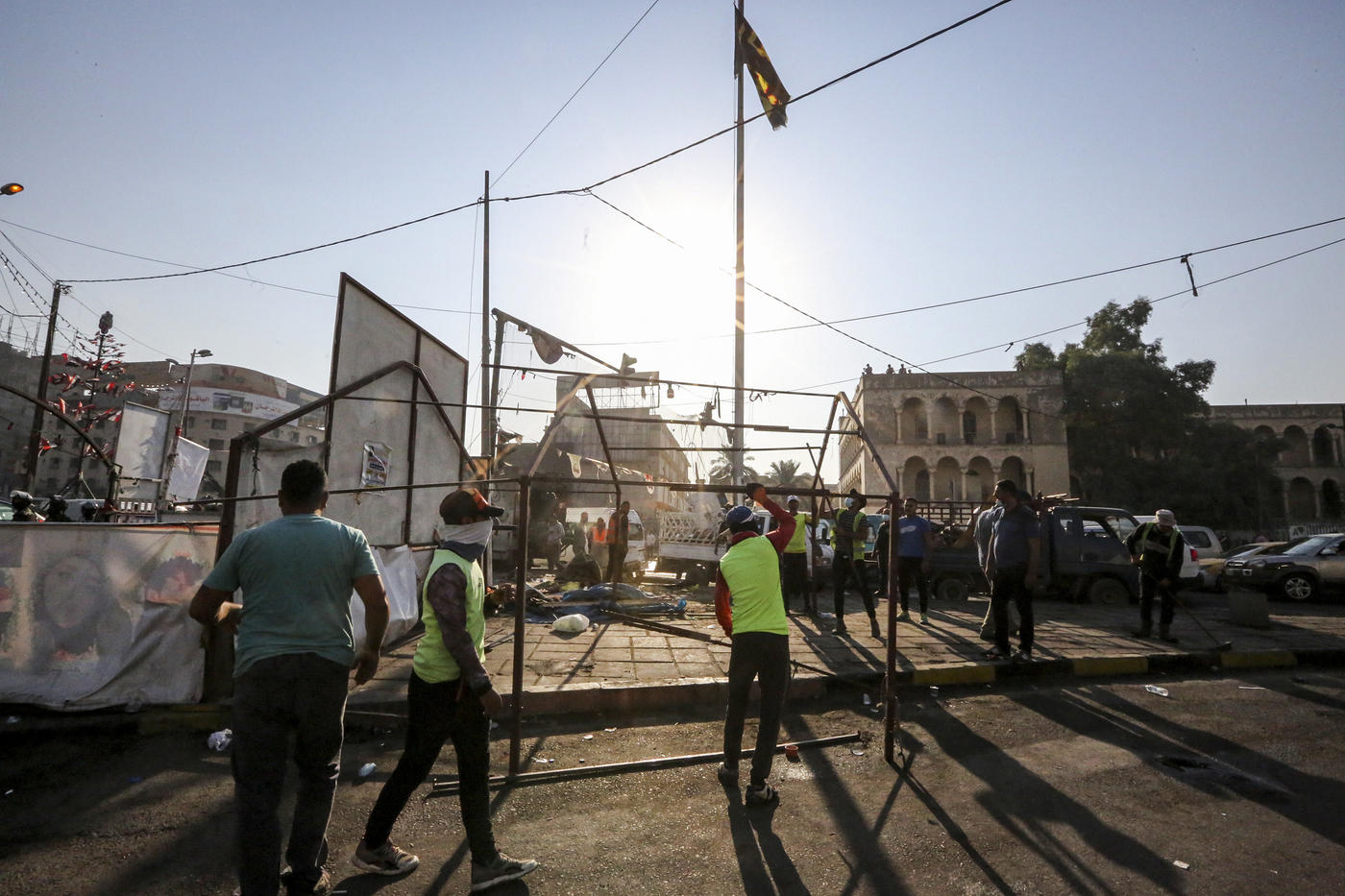 Less than a week after demonstrations were renewed in Baghdad against Iraq's political class, the authorities have removed the protest camp from Tahrir Square and a central bridge over the Tigris river that had been closed since October 2019.

Early on Saturday morning, security forces entered Tahrir Square, the epicentre of anti-government protests in the capital, to clear the tents and open the previously blocked off roads.

The government said Al-Jamhuriya Bridge, which connects the square with the heavily fortified Green Zone - the location of the Iraqi parliament and numerous diplomatic buildings - was opened for the first time since it was shut by the beginning of protests in October 2019.

The move received a mixed reaction from activists who have been campaigning for over a year for an end to corruption, unemployment and foreign interference in Iraq.

'If protests in Tahrir ends, it continues in other provinces of Basra, Nasiriyah, Babil, Karbala'

Some protesters said that opening the roads and returning life to normal meant the end of the revolution and the silencing of their voices.

Others, however, said protest camp had been infiltrated by elements seeking to undermine the demonstrations with violence and disruptions, and that clearing the camp was the only way to root them out.

Noor al-Taie, a student activist, told Middle East Eye that what was taking place was a "rest break" and not the end of the protests.

“We decided to withdraw from the square and leave the tents temporarily to help the security forces arrest the infiltrators, those who killed and wounded the protesters - but we were surprised when in the early morning the security forces, along with top military officials, entered Tahrir Square and ordered the destruction of the tents and arrested protesters while they were sleeping," she said.

Nevertheless, she said, the demonstrators would return soon "in a more massive movement".

"If protests in Tahrir end, it continues in other provinces of Basra, Nasiriyah, Babil, Karbala," she said.

Since the beginning of the demonstrations in October 2019, more than 600 people have been killed at the hands of security force and paramilitary groups.

Activists have long argued that members of the powerful militias were infiltrating the protests in order to stir up trouble and discredit the protesters, who have complained about the militias' influence in the country.

Taie said that these infiltrators were mostly from either Iran-backed groups, like the Badr Organisation or Harakat Hezbollah al-Nujaba, or supporters of cleric Muqtada al-Sadr, while the rest were affiliated with the government.

Hussein Ali, a protester based in Baghdad, said the security forces had beaten him and other protesters on Saturday as they dismantled the camp.

"Those who want to affect our protests belong to the Badr militia and Nujaba militia. We cannot kick them out or even talk with them; they have all kinds of weapons while we have the Iraq flag and our voices," he said.

"To confirm that our voice will never be silent, we will take to the streets tomorrow in a big march, trying to return the movement to as it was before."

A video spread on social media showing a protester crying while asking for help in lifting the portraits of people killed by Iraqi security forces and militias during the October uprising.

"I want even one person to come and help me to lift [the] martyrs' photos. I [am] left alone here," he said in the video.

In the city of Nasiriyah, protesters poured on to the streets and the central Habobi Square to stand with the people in Baghdad's Tahrir Square and show their rejection of what was happening in the capital.

"Al-Kadhimi and Basra governor al-Eidani both ordered us to end our massive gatherings and send us back home, but we will not let them do it. We will not leave the square until the government responds to all our demands we have been asking for since October 2019," he told MEE.

"Iraq's protest squares are one body; if a single organ hurts, other organs will respond and help. Basra's protests are not less important than Baghdad. Our voices are loud, and we will stick here even if they kill us or remove the tents."

Kadhimi has hailed the end of the Tahrir Square protest as a "return to normalcy" and praised the protesters for doing their "patriotic duty".

In a tweet, he said that the next step for the demonstrators should be the elections set to take place in June 2021.

A spokesperson for Iraqi Commander-in-Chief Yehia Rasool said the opening of the roads and bridges came in cooperation with peaceful protesters. 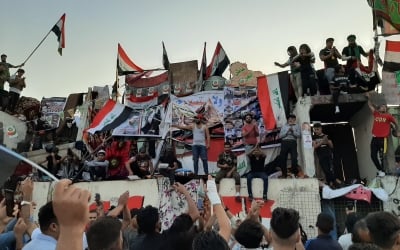 While demonstrations were continuing on Sunday, much of the momentum of the protests has been sapped by the coronavirus pandemic, as well as concerns by local businessmen that the protest camp was harming their income.

Ali al-Bayati, a member of the Iraqi High Commission for Human Rights, welcomed the reopening of the square and roads and bridges, pointing out that Iraq was going through an economic crisis and that there needed to be consideration given to business interests.

"I think the protesters should think of an alternate way of practising freedom of expression, with less harm to themselves and to the public interest, as well as more influence on the ground," he said.

"We need to consider the ongoing pandemic's needs for limitations and social distancing too."

Politicians have warned that it is very unlikely that next June's elections will go ahead as planned.

Reform of the election law has long been a pillar of the anti-government protesters' demands, but any reform faces tough resistance from the parliamentary parties, which fear losing the power and influence they have accrued since 2003.

An economic crisis and a collapse in oil prices have also put major pressure on the country. Combined with the impact of the coronavirus pandemic, which has killed more than 10,000 people, these have helped to drive the poverty rate in Iraq up to the present 40 percent.

Despite, and in part because of, these pressures, demonstrators promise to keep pushing ahead with their demands.