The politics of polio in the Middle East Before the war in Syria broke out, the country had been polio-free for 14 years. There have now been at least 37 confirmed cases of polio there and one has been reported in neighbouring Iraq.

Polio is highly contagious and can cause paralysis and even death. Transmitted via contaminated food and water, and also through kissing, coughing and sneezing, it was considered to have almost been eradicated worldwide before new cases arose.

Confirmation in April that the disease had spread to Iraq ignited debate about the effectiveness and appropriateness of the international aid community's response to the outbreak, particularly from the World Health Organization (WHO).

Earlier this year, the organisation was forced to respond to allegations it had blocked vaccination efforts in Syria and had obstructed the testing of polio samples.

An article written in February by deputy director of the Human Rights Programme at Icahn School of Medicine at Mount Sinai in New York City, "Syria’s Polio Epidemic: The Suppressed Truth" by Dr Annie Sparrow, had claimed that the WHO had misled the international community on the number of polio cases in Syria.

Perceptions that all the reported cases were in rebel-held areas, had also led the WHO to be accused of toeing the Syrian government’s line in terms of reporting results.

The WHO staunchly denies this, stressing that cases have also been found in government areas.

“Poliovirus does not distinguish between areas that are controlled by government or contested areas,” said Dr Hamid Jafari, director of polio operations and research at the WHO. “The only thing that matters to the poliovirus is whether a child is susceptible or not, whether that child has been vaccinated or not.

“While more children are likely to be unvaccinated in contested areas because of the breakdown of health services, the big danger with this disease is that it can travel across wide distances to find susceptible children anywhere.”

The complex political situation in the Middle East increased the risk of the Syria outbreak spreading. Since October last year, 25 polio vaccination campaigns have been completed in the region. But experts warn the deadly virus could continue to spread.

“In the context of the Middle East outbreak, we consider that there remains a high risk of spread as long as any circulation of the virus is continuing,” said Jafari.

“As long as polio remains anywhere in the world, polio-free countries everywhere will continue to be at risk of re-infection. That is why a Phase II plan for responding to the outbreak is currently being prepared, in conjunction with countries in the region and partners.”

Dr Basel al-Khader, from the charity Hand in Hand for Syria, travels to his home country regularly and believes that more children have succumbed to the virus than stated in the official figures.

“All the cases of polio are in rebel-held areas. It started in west Syria and then it spread to Idlib, Deir-ez Zor, Al Raqqa, Aleppo and other areas”, said Khader, mentioning cases of children aged from nine months to up to eight years old.

“Some of the children have been born during the conflict so they’ve not had any chance to have the vaccination. The others, who had had a few vaccinations, couldn’t continue it because there’s no centre where they can receive their secondary or third vaccination,” he said.

“Nobody can get access, the Syrian regime is not allowing any vaccinations to get in.

“If we don’t have the second round of vaccinations and don’t continue our hard work in Syria, it will continue. The problem is that hygiene is getting worse and worse. Month by month you see how the health of people is deteriorating.”

Polio specialist Sparrow told the Middle East Eye that it was impossible to determine the final extent of the outbreak.

“Refugees are treated like harbingers of disease, which makes it far more difficult to ascertain the spread as both the Turkish and Iraqi governments are unwilling to directly address or admit the presence of polio in both countries,” she said.

“It took 10 days or more for the Iraqi government to admit [there was a case of polio] in the country.”

Dr Sparrow is still critical of the way the WHO and the Syrian government has responded to the crisis.

“Polio provides a barometer reading of the reality of this war,” she said.

“The Syrian government and WHO are blaming it on the ‘war’ but polio didn’t reappear in Iraq despite years of war between 2003 and 2011. The baby in Baghdad with polio illustrates the lack of control and imperative to address the epicentre of the epidemic and the failure of the WHO.

“[In the meantime], the Syrian government gets to abdicate responsibility as the UN focuses on vaccinating the seven surrounding countries but is unable to address the real problem; meanwhile, [Syrian President Bashar al-] Assad bombs the northern governorates instead of vaccinating them.”

Sparrow recently estimated that at least 90 children had been infected with polio in Syria. While her figures and the official WHO figures may seem insignificant, for every case of paralysis from polio, there are between 200 and 1,000 children infected without symptoms.

Sparrow believes the WHO has ignored dozens of other reported cases of polio from other sources such as the Turkish Ministry of Health.

“WHO confirms polio cases on the basis of a very well established and accepted global case definition, which requires confirmation in a laboratory that is accredited to test for polio,” Dr Hamid Jafari said in response to her claims.

“That is why WHO emphasizes the need for sensitive surveillance systems that can detect cases of acute flaccid paralysis and investigate them properly. This certainly does become more difficult in conflict settings and it is very possible that some cases are missed in these settings.”

- Sophie Cousins is a freelance journalist based in Beirut. 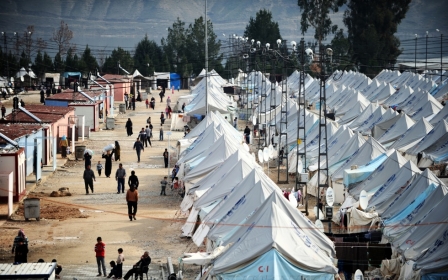