Pope Francis, Peres and Abbas pray together in the Vatican gardens 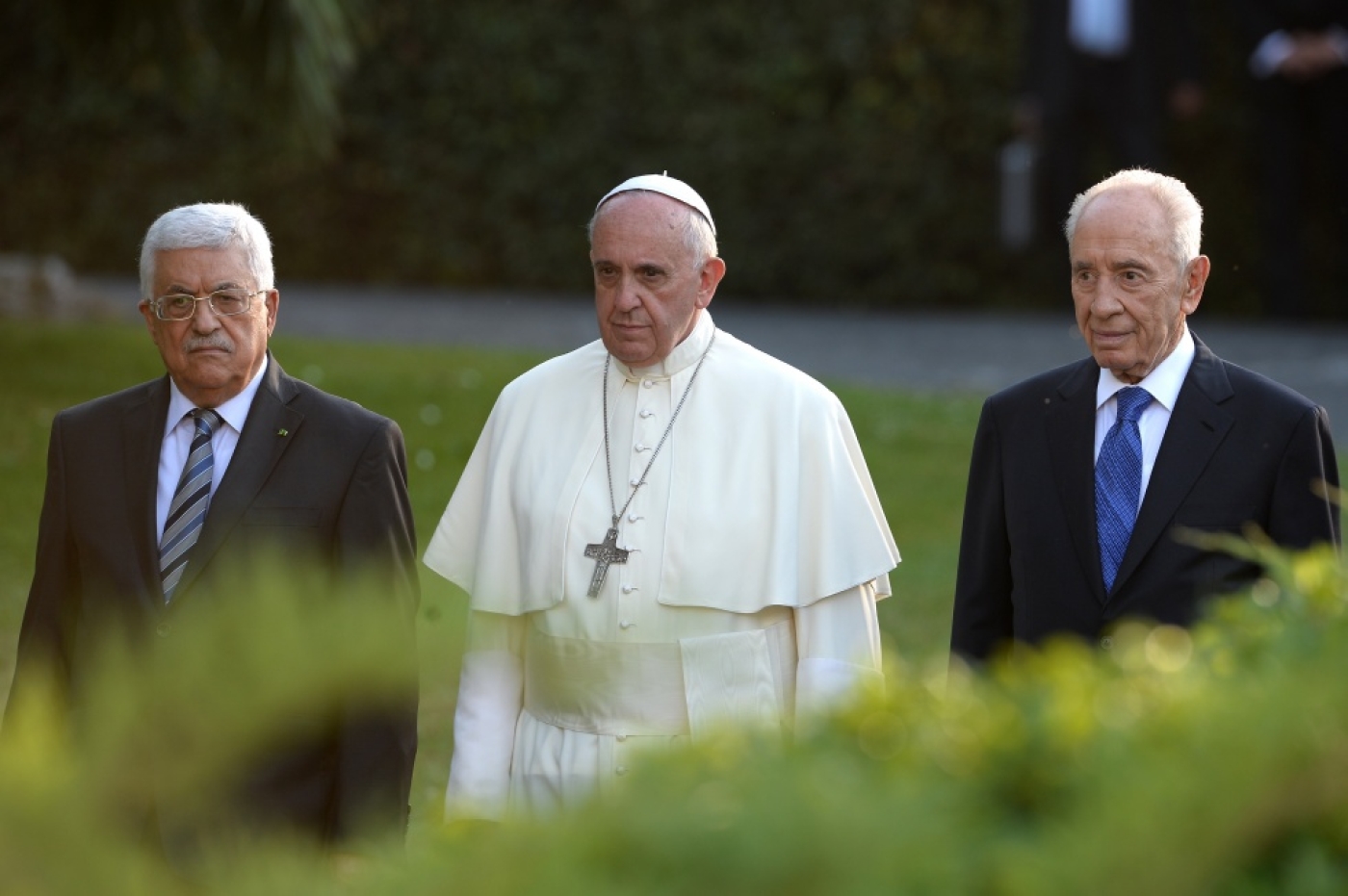 Pope Francis arrives with Palestinian leader Mahmoud Abbas and Israeli President Shimon Peres for a joint peace prayer on June 8, in the gardens of the Vatican (AFP)
By
MEE and agencies

Pope Francis, Israeli President Shimon Peres, Palestinian President Mahmoud Abbas and Greek Orthodox Patriarch Bartholomew gathered in The Vatican on Sunday to pray together for peace in the Middle East, amid elevated tensions between the two sides.

Abbas and Peres, who is 90 and is stepping down next month, greeted each other warmly when they arrived at the Vatican and met Pope Francis outside his residence.

Peres said peacemaking was a "duty" and a "holy mission" at the spiritual event in the Vatican gardens, and Abbas called for a "comprehensive and just peace" that could bring stability to the Middle East.

"Two peoples, Israelis and Palestinians, still are aching for peace. The tears of mothers over their children are still etched in our hearts. We must put an end to the cries, to the violence," Peres said.

Abbas said: "We want peace for us and our neighbours."

Excerpts from both the Bible and the Talmud were read, while a Muslim imam read verses from the holy Quran. The ceremony was conducted in four languages - Hebrew, Italian, English and Arabic.

The prayers were recited in the chronological order of the three monotheistic religions, starting with Judaism, followed by Christianity and then Islam.

"This meeting of prayer for peace in the Holy Land, in the Middle East and in the entire world is accompanied by the prayers of countless people of different cultures, nations, languages and religions, said the head of Roman Catholic Church, Pope Francis. They have prayed for this meeting and even now they are united with us in the same supplication," said Pope Francis.

His surprise invitation to pray at the Vatican took place during his visit to the Holy Land last month. The pope indicated that his peace prayer invitation was religious and not political in nature.

The choice of the Vatican Gardens for the prayers was seen as significant since it is considered the most neutral territory within the Vatican City, with none of the Christian iconography that might be seen as offensive to the other two faiths. With Abbas and Peres at his sides Francis called for courage:

“One needs courage to make peace, much more than when making war. You need courage to say yes to meeting and no to clashes, yes to dialogue and no to violence, yes to peace talks and no to hostility, yes to respecting peace agreements and no to provocation, yes to sincerity and no to duplicity. For all of this you need courage and great strength of spirit.”

The four leaders then symbolically shovelled soil for a newly-planted olive tree and held a closed-door meeting in a Vatican pavilion.  This event follows the collapse of US-backed Middle East peace talks earlier this year.

Abbas said he hoped the that ceremony would "help Israel decide" to make peace and told La Repubblica daily that the pope's invitation had been "courageous".

Tensions are running high between the two sides following the formation of a new Palestinian unity government backed by the Islamist group Hamas.

Israel has since announced plans for building 3,200 new settler homes and has said it will boycott what it denounces as a "government of terror".

Peres on Sunday said the Palestinian unity government was "a contradiction that can't last very long", but Abbas defended it saying: "One should never reject a chance for dialogue, internally as well."

'Time to stop and breathe'

The Vatican was realistic about the effect of the event.

"Nobody is fooling themselves that peace will break out in the Holy Land," said Father Pierbattista Pizzaballa, the head of the Franciscan Order in the Middle East who helped organise the historic event.

"But this time to stop and breathe has been absent for some time," he told reporters at a briefing, adding: "Not everything is decided by politics."

Francis has admitted it would be "crazy" to expect any Vatican mediation in the Israeli-Palestinian conflict but said that praying together might help in some way.

In a tweet from the Argentine pontiff's @pontifex account on Saturday, Francis said: "Prayer is all-powerful. Let us use it to bring peace to the Middle East and peace to the world."

Rabbi Abraham Skorka and Muslim professor Omar Abboud, two friends of Francis's from Buenos Aires who travelled and prayed together with the pontiff on his trip to the Middle East also attended.

Every detail of the event was carefully planned.

The day was chosen to avoid the Muslim holy day of Friday and the Jewish Sabbath on Saturday and fell on the Christian holiday of Pentecost - a celebration of the Holy Spirit considered appropriate for the event.