Turkish officials in Moscow seeking ceasefire, as Damascus vows to push on with offensive Relentless bombing by the Syrian government and Russian forces has targeted towns, villages and two hospitals in northwest Syria, as Turkish officials in Moscow desperately seek a ceasefire.

Territory in the Idlib and Aleppo countrysides is falling fast to forces loyal to President Bashar al-Assad, which on Monday said they had captured dozens of towns as they continue to push ahead with an offensive.

The fighting's frontline is mainly in the western Aleppo countryside, where the town of Darat Izza and two hospitals were heavily bombed.

Adnan al-Imam, an activist from the outskirts of Aleppo city, said Russian jets were believed responsible for the eight missiles fired at the hospitals.

"The attacks directly targeted the hospitals. Rescue teams evacuated the wounded and the hospital staff," Imam, who visited the scene of the attack, told Middle East Eye.

'Al-Fardous hospital provides its services to more than 300,000 people, and its disruption increases the suffering of thousands of displaced civilians'

The Syrian Civil Defence, a search-and-rescue organistion also known as the White Helmets, said that the Russian air strikes had put the hospitals out of service.

"We have evacuated two wounded people, one of them is the hospital guard," Ibrahim Abu al-Laith, head of the White Helmets office in Aleppo, told MEE.

"The hospitals are located in close proximity to each other. We have secured the evacuation of all hospital staff."

These two hospitals were the last operational medical centres in western Aleppo, according to Obaida Dandush, an administrator in the Turkey-based Syrian Organisation for Relief and Development (SRD).

The Kinana hospital specialised in general surgery, while the al-Fardous hospital, which receives support from the SRD, is dedicated to gynaecology and children.

"Al-Fardous hospital provides its services to more than 300,000 people, and its disruption increases the suffering of thousands of displaced civilians in the surrounding area," Dandush told MEE.

On Sunday, Syrian government forces took control of large areas west of Aleppo and declared full control of the city, after a rebel collapse in Khan al-Asal, the last western neighbourhood in opposition hands. Civilian flights will resume to Aleppo's airport this week for the first time since 2012, state media said.

Russian jets also on Monday targeted the town of Ariha, south of Idlib city, activists said. Ariha, a town on the coveted M4 highway, has been largely emptied of its residents by the bombardment.

"The raids extended to the vicinity of Ariha towards the villages of Jabal al-Zawiya, and violent clashes erupted south of the area," Hudhaifa al-Khatib, a displaced activist residing in the city of Idlib, told MEE.

"The rebels retook the town of Kafr Sajnah, which government forces has seized yesterday." 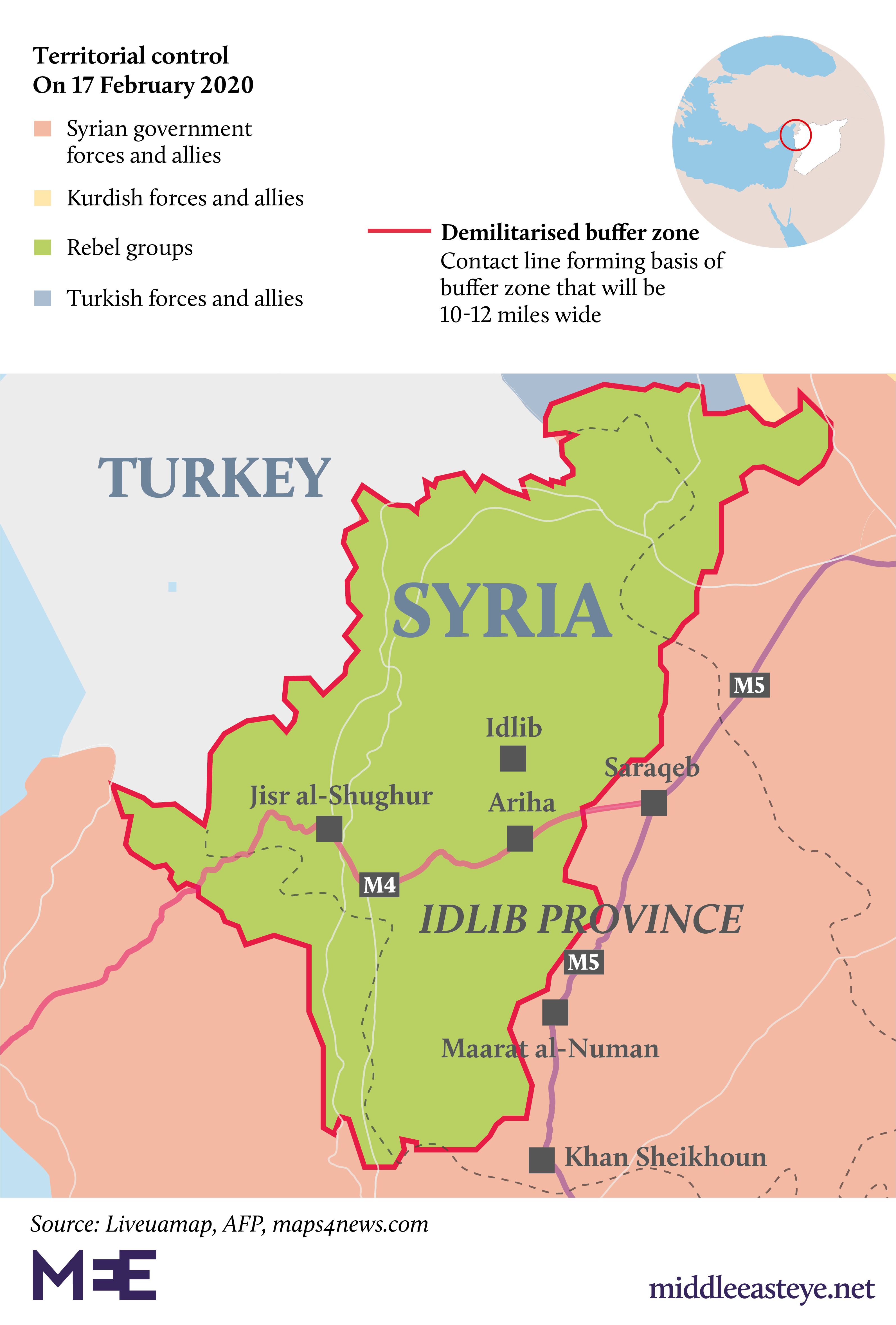 Nearly a million people have been displaced by Syrian government forces towards the Turkish border since the offensive began in December, with over 300 civilians killed.

Around 82,000 of those are living in tents pitched in exposed fields, subject to freezing winter temperatures, the UN said last week. More than half of the displaced are children.

Turkey, which backs rebel groups holding out in northwest Syria, is anxious that hundreds of thousands of displaced people might pour over its border, joining the 3.5 million Syrian refugees already hosted by the country.

In recent days Ankara has poured arms, men and vehicles into Idlib province, the Syrian opposition’s last redoubt, with more coming across the border on Monday morning.

Turkey's threats against Damascus and support for rebel groups has also increased, with the two sides’ artillery clashing last week with deadly effect. Anti-aircraft weapons have been provided by Ankara to rebel fighters, who last week shot down two Syrian government helicopters, which previously were able to freely bomb civilian areas.

Turkey has held several meetings with Russia, Assad’s most powerful ally and partner on the ground, hoping to reach some kind of ceasefire, though all attempts have been unsuccessful.

Turkish officials are currently in Moscow for talks. “We hope to reach a joint vision to reduce tensions in Syria,” Russian Foreign Minister Sergey Lavrov said.

Monday's dialogue concluded without results, with the two sides set to convene again the next day.

"Our delegation highlighted that the tensions on the ground should quickly be reduced and humanitarian situations shouldn’t be worsened," a Turkish diplomatic source said.

"We exchanged opinions on measures on how to completely implement the Sochi agreement and prevent violations."

On the ground, however, pro-Syrian government forces are showing no sign of letting up. The Syrian army said in a statement it would continue its "sacred and noble task to rid what remains of terrorist organisations wherever on Syria's geography they are found".

Damascus’ chief objective currently is securing the area around the highly strategic M5 highway, which runs from the Syrian capital to Aleppo via the cities of Homs and Hama.

According to al-Watan, a newspaper close to the Assad government, civilians are expected to be able to use the recently seized sections of the highway by the end of the week.

Ragip Soylu contributed to this report.