An Egyptian court on Wednesday sentenced in absentia prominent activist Alaa Abdel Fattah to 15 years in jail on charges of participating in an illegal protest, his lawyer said.

Twenty-four other defendants were sentenced, also in absentia, to 15 years in jail each on the same charges.

Abdel Fattah, who helped spearhead the 2011 uprising that toppled strongman Hosni Mubarak, was arrested in November and charged with taking part in an illegal and violent protest.

His arrest came amid a widespread crackdown by the military-installed authorities against Islamist and secular dissent in the wake of the army's ouster of Muslim Brotherhood president Mohamed Morsi in July.

Last December, the Egyptian government branded the Muslim Brotherhood, the group from which Morsi hails, as a "terrorist" organization.

He was released on bail in March and was not in the makeshift court set up in a Cairo police academy on Wednesday when the sentence was handed down.

He and two other defendants were however arrested outside the building immediately after the ruling was announced, lawyer Ahmed Seif, who is also Abdel Fattah's father, told AFP.

Dozens of youth activists have in the past few months been jailed for violating a controversial protest law banning all but police-sanctioned protests.

In April, an appeals court upheld three-year prison sentences for three other prominent activists, including the founder of the April 6 youth movement, Ahmed Maher, charged with violating the protest law.

An additional ruling occurred in an Egyptian court on Tuesday when 46 supporters of ousted president Mohamed Morsi, including five girls, were each slapped with five-year jail terms for joining the Muslim Brotherhood.

The court in the Nile Delta city of Shebin al-Kom found the defendants guilty of "joining an illegal group, involvement in acts of violence, blocking roads and assault," judicial sources said.

Defendants, for their part, emphatically deny the charges, which they say are politically motivated.

A government crackdown targeting his supporters has left more than 1,400 killed in street clashes and seen at least 15,000 jailed. 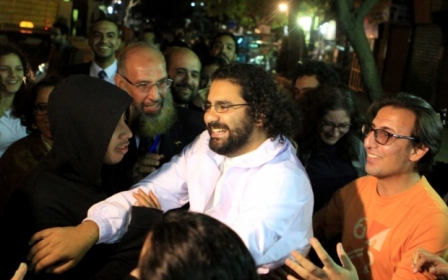