Prominent Egyptian activist is sentenced to 5 years in prison Egyptian activist Alaa Abdel Fattah is greeted by his wife Manal Hassan and their baby following his release from the police headquarters in Cairo on 25 December, 2011 (AFP)
By
MEE staff

A court in Egypt has sentenced prominent Egyptian activist and blogger Alaa Abdel Fattah to five years in prison and a 100,000 Egyptian pound ($13,100) fine.

24 activists were in court to hear the final verdict on their sentencing after they were arrested following a protest in front of the Egyptian Shura Council in November 2013. The protesters were demonstrating against the new protest law, which stipulated that civilians could be tried in military courts.

The law went into effect on 26 November of that year, the same day that the protest took place. Security forces used water cannons and tear gas to disperse the crowd. Dozens were arrested, including Abdel Fattah’s youngest sister Sanaa, who was sentenced to three years in prison in October.

The controversial law sets a maximum of seven years and a fine of 300,000 Egyptian pounds for charges of violent acts during protests.

The court today was a retrial of the session that took place last summer, where Abdel Fattah was initially sentenced to 15 years in prison before the verdict was successfully appealed. The court has been postponed since then.

24 others were also sentenced for their role in the protests, including Ahmad Abdel Rahman who was given the same verdict as Abdel Fattah. Three of the defendants received 15 years in prison for not being present in the court. The rest received a three-year sentence and a $13,100 fine.

Another day in the court of injustice #egypt

Hailed as the “icon of the revolution,” Abdel Fattah has been a leading voice in the protests against former president Hosni Mubarak, and was an outspoken figure against Egypt’s military rule. He was accused of organising an illegal protest in 2013, as well as assaulting a police officer.

As the verdicts were read out, family members and friends were either stunned into silence or openly wept. The defendants mockingly applauded the judges. The courtroom erupted into chants against the military and pro-revolution slogans.

The lawyer for Abdel Fattah stated that the court’s ruling today is considered a preliminary one, since the initial verdict was handed in absentia.

“We will appeal at the Court of Cassation,” said Osama al-Mahdy, adding that this court will choose to either order a retrial or uphold the verdict.

The defence is able to file an appeal within 60 days of the verdict.

Omar Robert Hamilton, a relative of Abdel Fattah, told the Middle East Eye that the court of cassation "used to have a reputation of being more effective than the other branches of the judiciary" but that it has not been issuing favourable verdicts to appealed cases.

"You can’t hear the defendants anymore," Hamilton said, referring to the moment when the verdict was read out in court. "They’re put in a glass soundproofed cage. But apparently they all stood and clapped sarcastically until they were led out [of the courtroom.] They made a point to stand and look proud before they started clapping."

“Before loads would happen in a week or months, now we’ve had to change the thinking in terms of months and years and settle in a much slower way of living…you’re at the mercy of the Egyptian state timetable which is very bureaucratic,” he added.

Earlier, Mohamed Fahmy and Baher Mohamed, the two Al-Jazeera journalists who were released on 13 February after spending 411 days in prison, were back in court today for a retrial. The Court of Cassation adjourned the session to 8 March, after overturning a lower court’s verdict which found Fahmy and Mohamed guilty of assisting the outlawed Muslim Brotherhood organisation.

The appeals court said that the lower court’s ruling “lacked evidence to support its ruling” and “was hasty in pronouncing its verdict.” 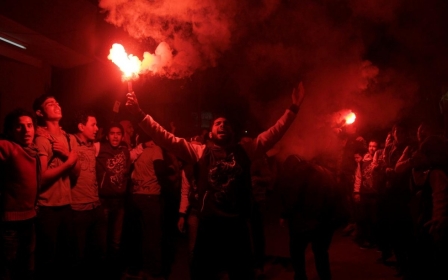 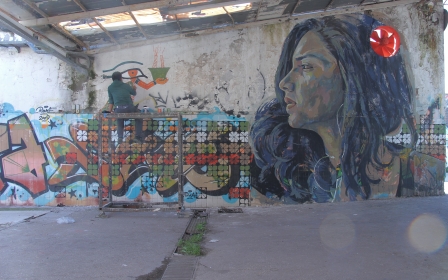 Egypt Turmoil
Sanaa Seif: A symbol of the revolution Egypt Turmoil
In Egypt, the verdict is still out
Nadine Marroushi