Measures failed to disperse protesters, who responded by hurling Molotov cocktails and letting off fireworks 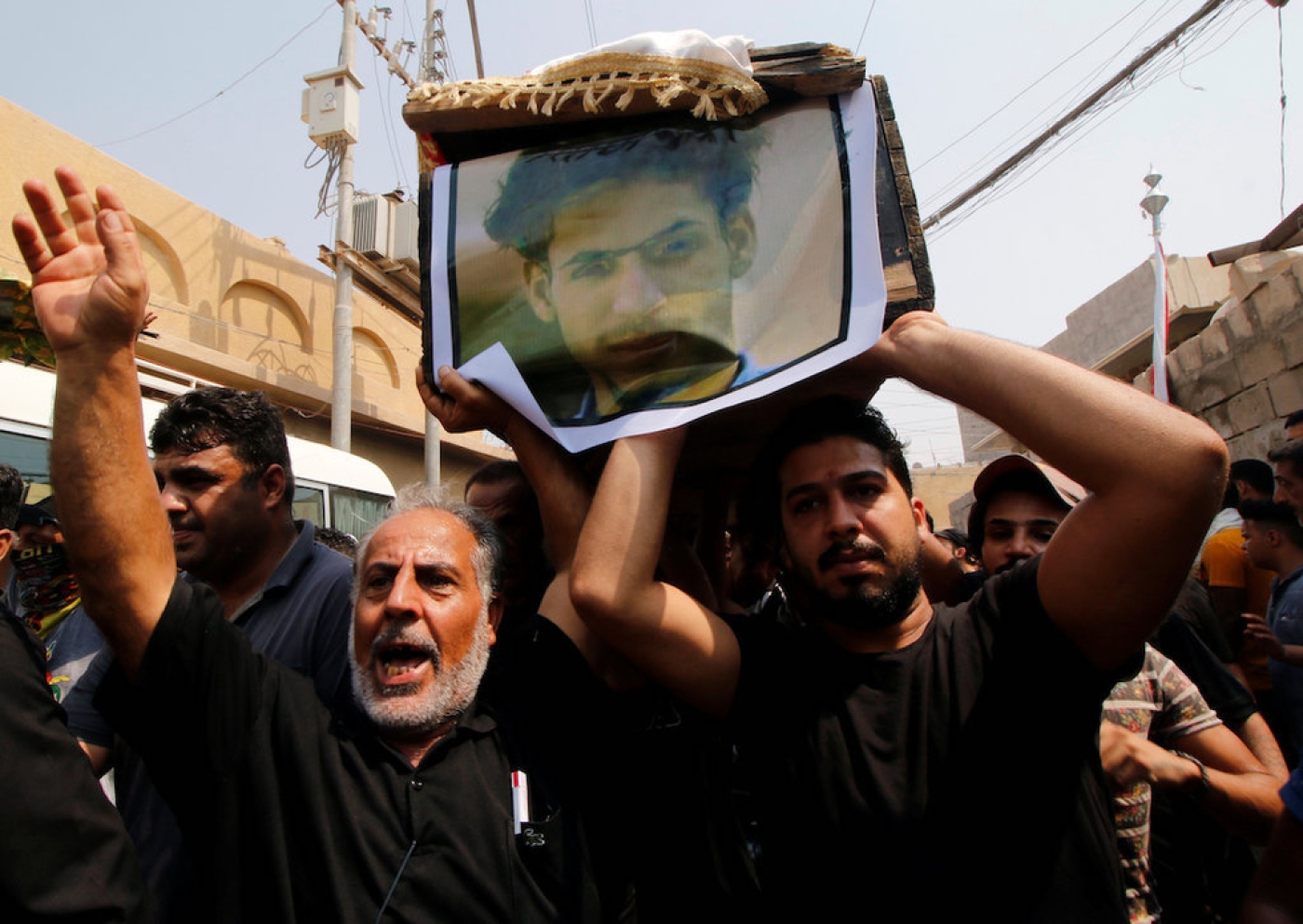 Mourners carry the coffin of a protester, who was killed in clashes with security forces in Basra (Reuters)
By
Alex MacDonald

Protesters blocked the entrance to Iraq's Umm Qasr commodities port on Wednesday to demand better services, port employees and local government officials said, raising the stakes in some of the worst unrest in southern cities in months.

The move came hours after stone-throwing protesters set fire to the main provincial government building in the oil hub of Basra, Iraq's second largest city. The highway from Basra to Baghdad was cut off by demonstrators.

"Protesters have blocked the main entrance to the port. Trucks that carry supplies can't enter or leave the facility," said one of the officials.

Any potential disruptions to oil production could severely impact Iraq's limping economy as the OPEC member faces the overwhelming task of rebuilding after a war with Islamic State that cost tens of billions of dollars.

Umm Qasr receives Iraq's grain, vegetable oils and sugar shipments. So far it is not clear if the unrest will have a serious impact on the port's operations.

Iraqi security forces opened fire on protesters earlier on Wednesday as the two sides clashed for the third day in the southern city of Basra, a day after six people were killed in demonstrations over poor public services.

An AFP journalist reported gunshots and tear gas were fired by security personnel directly at thousands of demonstrators gathered outside the regional government headquarters.

The measures failed to disperse protesters, who responded by hurling Molotov cocktails and letting off fireworks at the security forces.

At least one demonstrator was taken to hospital by ambulance after being hit in the head by a tear gas canister.

Security forces later stopped firing in the direction of protesters and instead fired shots in the air and used tear gas against the demonstrators.

Unrest has been ongoing since July in southern Iraq, as high temperatures combined with a lack of electricity and water have pushed locals to breaking point. According to Basra's health department, at least 17,000 people have been admitted to hospital as a result of polluted water since 12 August.

On Wednesday, the UN warned against the use of force against demonstrators in Basra and called on the government to address their "rightful demands".

Jan Kubis, Special Representative of the United Nations Secretary-General for Iraq, expressed “grave concern over the casualties during violent protests over the lack of critical public services in Basra" and called for the formation of a "new national, patriotic and pro-reform government."

"I think more violence will occur, from both security forces and protesters," he said.

"And most probably there will be no [more] peaceful protests - we know lots of Iraqis (especially tribal people and leaders) own weapons and they can easily use them against the security forces."

He added, however, that he did not believe Basra had the potential to be a "second Mosul", referring to the take over of the northern city by Islamic State in 2014.

New MPs elected in the May parliamentary elections were sworn in on Monday, while the fractured political groups in parliament coalesced into two major blocs, which will put forward rival proposals to form a government.

The similarly named Construction bloc is made up of an array of Iran-backed groups, including Hadi al-Ameri's Fatah coalition and former prime minister Nouri al-Maliki's State of Law coalition.

Both blocs have claimed to have the biggest group in parliament.

Raid Fahmi, leader of the Iraqi Communist Party - part of the Sairoun Alliance - said that the deaths of protesters and the continuing unrest meant it was imperative that a new government was formed and that the problems in the region were addressed.

"Conditions, particularly with regard to water, are becoming unbearable," he told Middle East Eye on Tuesday.

"All this makes it urgent that the problem should be dealt with politically, financially, technically and in terms of providing essential services."