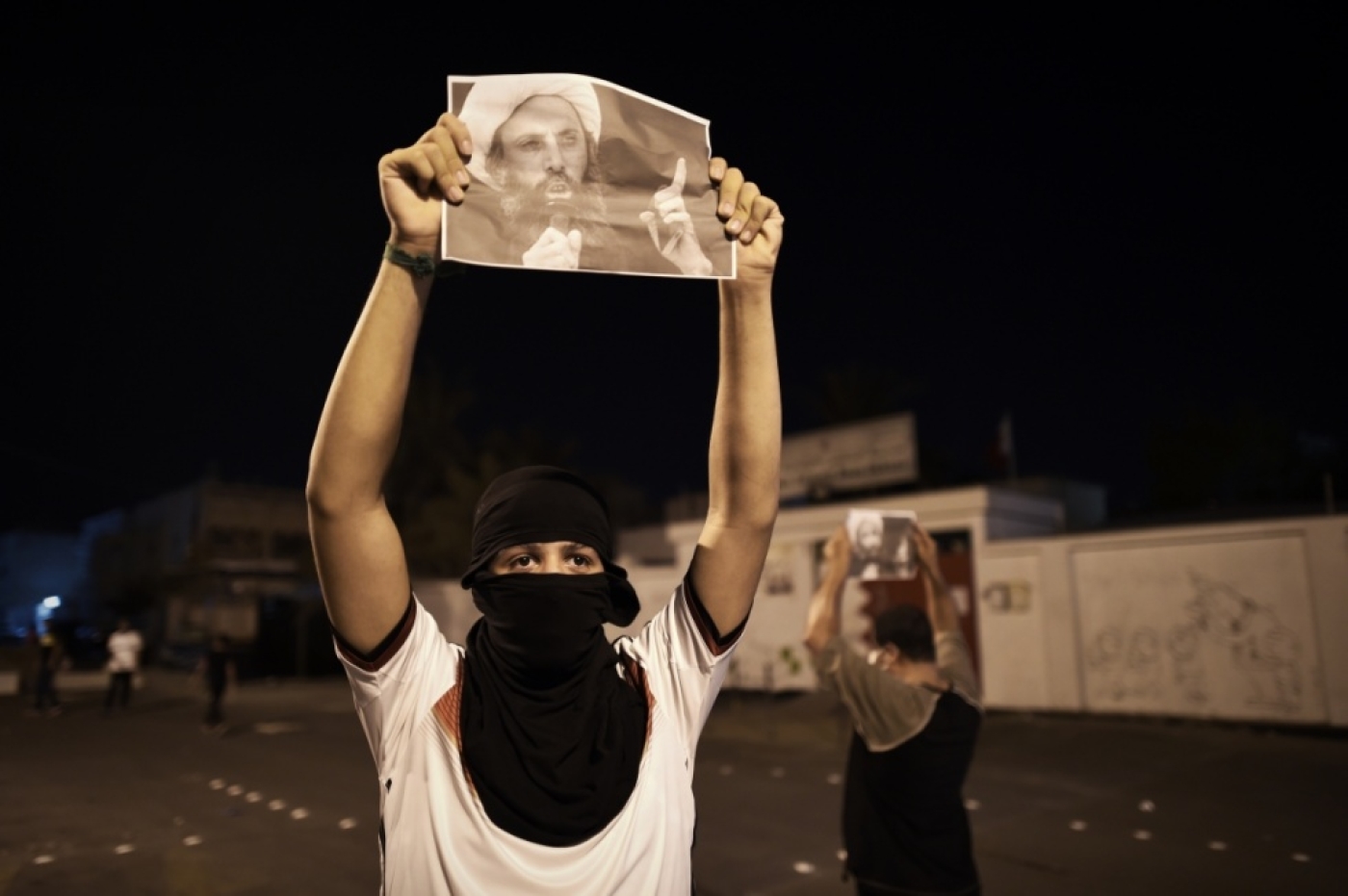 Protests continued for a third day in Saudi Arabia’s Eastern Province on Friday, where the Shia community are angry at a death sentence handed down earlier this week to a popular anti-government cleric.

Protestors told MEE that the demonstrations have been peaceful and will continue for at least a month – unless the death sentence is rescinded against Sheikh Nimr al-Nimr.

“On Wednesday night, the protest was in the middle of Qatif, on what we call Revolution Street – at least three thousand people took part,” said Mehdi, a young protestor from Awamiya, a small village near Saudi Arabia's eastern coast, who preferred to use only his first name for security reasons.

The protests continued on Thursday evening with hundreds gathering in Awamiya, and then again on Friday afternoon in Ar Rabiayah, another village about 20 minutes by car from Awamiya.

“All the protests have been peaceful and no security forces turned up," Mehdi said. "Tonight [Friday] they will protest again on Revolution Street – we expect more than a thousand people will turn up.”

“I think the protests will carry on for a month, taking place at weekends in Qatif.”

Sheikh Nimr al-Nimr is a wildly popular religious cleric among Saudi Arabia’s Shia community, who make up between 10 and 15 percent of the country’s 28mn population and are discriminated against by the government according to Human Rights Watch.

Sheikh Nimr led anti-government protests that erupted in 2011 inspired by the Arab Spring and made speeches calling for the downfall of the al-Saud monarchy and equality for the country’s Shia community. His activity led to his arrest in June 2012 after being shot and wounded by police officers.

On Wednesday, Sheikh Nimr was convicted of numerous charges – including disobeying the king and calling for the collapse of the state – and sentenced to death, a punishment usually carried out by beheading.

While protesters accept that they are unlikely to pressure authorities into changing the sentence, they remain committed to holding further rallies.

“We want the whole world to listen to our demands,” said Mehdi. “The protests are not just against the government but for human rights – we want international organisations to step in and try to overturn the death sentence against Sheikh Nimr.”

Mehdi said there would be “a violent revolution” if the cleric is executed, although analysts have argued this is the reason authorities are unlikely to carry out the death sentence.

University of Cambridge Gulf expert Toby Matthiesen told MEE Thursday he believes the sentence will be commuted to a lengthy prison term but warned the arrest of the sheikh’s brother Mohammed could prompt further unrest.

Mohammed al-Nimr is being held in police custody pending investigation after releasing a statement on Twitter criticising his brother’s death sentence.

Activists explained the key position he holds within the community in the Eastern Province.

“Mohammed al-Nimr is a publisher of a magazine. He is an important man – even the people who disagree with Sheikh Nimr have a good relationship with Mohammed. His arrest is a very bad move by the Saudi authorities,” Mehdi said.

Mehdi went on to say that Sheikh Nimr himself is not a “normal leader” but is “important for Shias everywhere”, a sentiment that seems to have been emphasised by the regional response to his death sentence.

Iranian Deputy Foreign Minister Hossein Amir-Abdollahian said it will “provoke international reaction” and criticised the court ruling as not contributing “to the restoration of peace and calm in the region.”

Experts on Saudi Arabia said the timing of Sheikh Nimr’s death sentence revealed the growing level of pressure felt by the kingdom’s monarchy.

“The Saudi regime is beginning to feel that it has lost the support of the Sunnis, especially after they joined the coalition against ISIS [also known as Islamic State or IS]. There is quite a lot of resentment among Saudi groups that sympathise with ISIS,” said Madawi al-Rasheed, visiting professor at the London School of Economics Middle East Centre.

There is believed to be substantial support in Saudi Arabia for Sunni militant group IS, who are being targeted by a US-led coalition after having seized control of large areas in Iraq and Syria. Ninety-two percent of respondents to a July poll in Saudi Arabia said IS “conforms to the values of Islam and Islamic law”.
“Some Saudis say the regime is opening the door to Shia power by participating in the anti-IS coalition. Mainstream commentators in Saudi have said IS is bad but at least they got rid of Maliki and it acts as a buffer against Iran,” said Frederic Wehrey, a senior associate of Middle East Program at the Carnegie Endowment for International Peace.

Rasheed said Sunni “suspicion” of the Saudi monarchy’s actions has been compounded by recent developments in Yemen.

“The general understanding amongst many Saudis is that the regime [in Riyadh] has supported the Houthis in order to quash political Islam – the Islah Party in Yemen,” she said.

Saudi Arabia has domestically designated the Muslim Brotherhood as terrorists and supported the 2013 ousting of the group from the Egyptian presidency in a military coup.

Rasheed said in Yemen and in the anti-IS coalition “the Saudi regime is not looking as if it is actually supporting the Sunnis".

“This is compounded by the recent rapprochement between Saudi Arabia and [Shia] Iran” she said, adding that a thaw in relations had come due to the threat IS pose to both Riyadh and Tehran.

“The majority [of Sunnis] are a bit suspicious of the intentions of the Saudi regime as a result of these regional developments.”

“Therefore a death sentence, which seems to be very harsh, on a Shia personality [Sheikh Nimr] – who is a controversial figure – comes at the right time for the Saudi regime in order to gain a semblance of being heavy-handed on all groups Sunni and Shia who threaten security.”

Others agreed the timing of the sentencing was a political decision and said it mirrored reasoning many believed motivated Sheikh Nimr's original arrest in 2012.

“The regime had been jailing large numbers of opponents to Abdullah’s reforms so people saw the arrest as an attempt by authorities to show the [Sunni] conservatives they were treating the Shias in equally bad terms,” said Wehrey, who visited the Eastern Province two years ago and spoke to Nimr's family shortly after he was detained.

All of this together points to a Saudi monarchy under increasing pressure, according to both Rasheed and Wehrey.

“The Saudi regime feels like they are surrounded by ‘evil forces’. In addition to the sectarianism, regional turmoil and terrorism, there’s a problem of weak leadership. [King] Abdullah and [Crown Prince] Salman have lost their ability to assess the situation – they are drawn into alliances and action without thinking about the costs,” she said.

“In addition, we are seeing a decline in oil prices, over the last week or so, which will also increase pressure on the regime. They are currently using a lot of that revenue to suppress any kind of dissent and also get engaged in regional conflicts that we don’t know the consequences of.”

“The larger picture is this balancing of sectarianism – the monarchy is exposed because of its role in the anti-IS coalition – and the regime is trying to show it is tough on the Shias and not opening the door to increased Iranian influence in the region,” said Wehrey.