Two of the world's largest energy producers, Qatar and Russia, on Wednesday vowed to increase trade ties at a time when the emirate is facing an economic boycott from neighbouring states.

Russian Foreign Minister Sergei Lavrov made the commitment after a "lengthy" meeting in Doha with his Qatari counterpart, Sheikh Mohammed bin Abdulrahman Al-Thani, and before that, the country's Emir Sheikh Tamim bin Hamad Al-Thani.

"We are committed to bolstering trade and economic ties," Lavrov told reporters afterwards.

He added that Moscow "attached great importance" to economic cooperation, including energy, between the two countries, a sentiment echoed by Sheikh Mohammed.

Russia and Qatar are two of the world's top four gas producing countries.

Qatar has turned to expanding its economic ties after a group of countries led by Saudi Arabia and United Arab Emirates cut off political and trade links with Doha on June 5, initiating the Gulf's worst political crisis in years.

The bloc accuses Qatar of supporting extremism, a charge the emirate denies.

On the crisis itself, Sheikh Mohammed said there had been little change and accused Saudi and others of ignoring Qatari calls for dialogue.

"Now we have reached 90 days of the crisis we are still in the same position," he said.

"We haven't seen any change or development in reaching the end of the crisis."

He accused Saudi Arabia and its partners of ignoring "on at least 12 different occasions" Qatari calls for talks on resolving the diplomatic impasse.

Lavrov - who has also visited Kuwait and the UAE as part of his Middle East tour - called for all parties to find a solution.

He said the disputing countries should work with regional mediators Kuwait to resolve the crisis.

"We are convinced that there's a need to seek a solution by searching for mutually beneficial approaches through dialect," said the Russian foreign minister.

"It's in our interests for the GCC to be united and strong," he said, referring to the Gulf Cooperation Council comprised of Bahrain, Kuwait, Oman, Qatar, Saudi Arabia and the UAE.

Economy
Turkey's gaming industry has defied slowdown to be a global winner
Economy
Analysts blame Turkey's government as lira sinks to record low against dollar
Lebanon economic crisis
Children 'will start dying from hunger' in Beirut, Save the Children warns 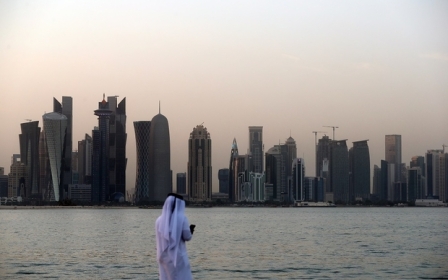