Qatar's ambassador said Doha will no longer fund salaries of Hamas employees in Gaza, but will continue to aid poor families Thousands of impoverished Gazans have received $100 payments from Qatar on Saturday, after the Gulf emirate brought in over $9m in aid funds for the Palestinian territory.

The money had on Thursday been refused by Hamas, which governs the besieged strip, saying it would not allow the funds to be used as political fodder in the upcoming Israeli elections.

Israel's Prime Minister Benjamin Netanyahu, who has been blocking the funds, is campaigning for re-election on 9 April and the Qatari aid has sparked opposition from right-wing activists and politicians.

On Friday, Mohammed al-Emadi, Qatar's ambassador to Gaza, said that the funds that Hamas had refused would be redirected to humanitarian projects in the Strip in accordance with the United Nations and Hamas.

Emadi said that 94,000 families would receive the latest cash, while other funds would be aimed at bolstering medical services and electricity.

The ambassador said: "It was agreed to allocate the Qatari financial grant to pay for humanitarian projects with full cooperation and coordination with the United Nations."

He said the first agreement with the UN would be signed on Monday next week, setting up a $20 million job creation project.

Emadi added that Qatar will no longer fund salaries of Hamas employees in Gaza, but will continue to aid poor families.

We "will not pay the salaries of the Hamas employees", Emadi told AFP on Saturday.

Qatar had pledged to send $15m to Gaza monthly as part of an informal agreement between Israel and Hamas reached in November.

Most of the funds were to have been used to pay the salaries of Hamas civil servants but around $5m monthly was for impoverished Gazans.

The first 44,000 families will be able to access the latest funds between Saturday and Thursday at Gaza's post office branches, Emadi said.

On Sunday, the funds for the remaining 50,000 families will be transferred.

AFP journalists reported that thousands of impoverished Gazans had begun queuing on Saturday at post offices to receive the $100 payments.

Each family will receive $400 in four instalments over the next four months.

Israel's original decision to block the Qatari funds came after a Palestinian affiliated with Hamas was killed and four others were wounded by Israeli tank fire on Tuesday.

The Israeli army said it had targeted a Hamas observation post after one of its soldiers was lightly wounded earlier on Tuesday when a bullet struck his helmet.

Later on Tuesday, the Israeli army said its warplanes had conducted an attack against a purported Hamas site in northern Gaza. No injuries were reported following the operation. 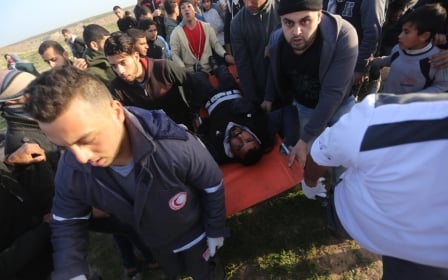