Raqqa in ruins: Brutal fight against IS leaves city destroyed

US-backed SDF forces look to soon liberate Raqqa from IS. But not much of the city remains 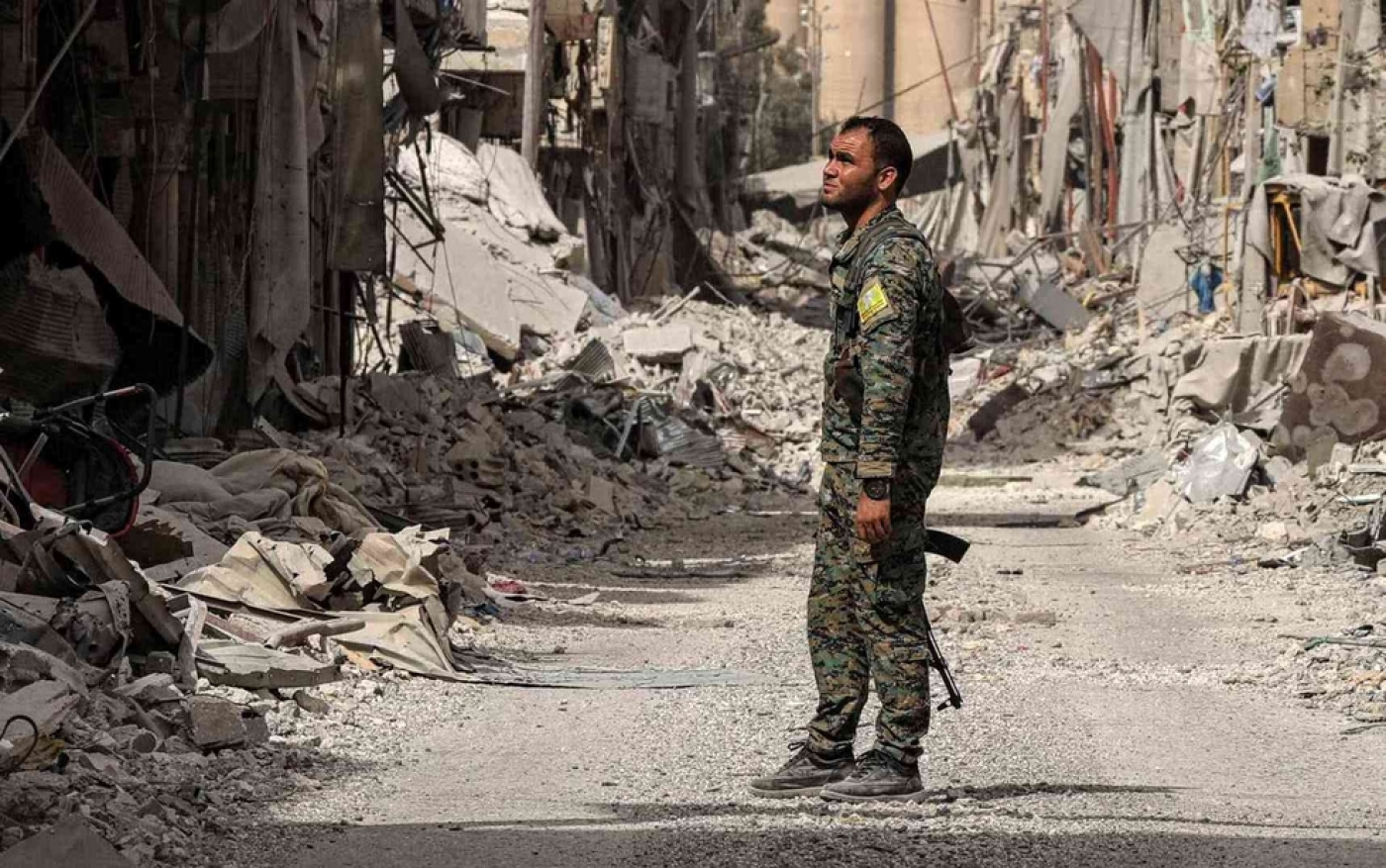 At least half the city has been totally destroyed, according to a reconstruction official (Reuters)
By
Wladimir van Wilgenburg

RAQQA, Syria – As the Islamic State (IS) group is slowly but surely routed from its former Syrian "capital" in Raqqa, the last stand looks to be the most vicious, with civilians being used as human shields, and mines circling the city.

Reduced to its last few positions in Raqqa, from where IS once planned major attacks against the West, the militant group now holds around 20 to 25 percent of the city, according to officials from the US-backed Syrian Democratic Forces (SDF).

But a senior SDF commander warned against “premature” declarations that the fight was over.

“From what we're seeing, IS is indeed weakened in Raqqa. They're not functioning as we've seen elsewhere,” an anonymous US official told MEE.

“That may be why observers are prematurely declaring victory. But if west Mosul is any indication, it doesn't take many IS fighters to make an urban battle long and drawn out,” he added.

On Tuesday, wearing camouflage with YPG insignias, IS managed to infiltrate the frontlines in the northeast of the city.

The attack was eventually repelled, but 28 SDF members were killed, including British-Kurdish filmmaker and member of their media team, Mehmet Aksoy, who was 32.

Around 100 IS members were involved in the ambush, according to the SDF.

But generally, according to Ismet Sheikh Hassan, a senior Kurdish defence official from Kobane “the situation is good, it will not take long, there is only 20 to 25 percent left, and also the operation for Deir Ezzor has started".

A few kilometres from the frontlines in Raqqa last week, US coalition forces in the east of Raqqa could be seen firing mortars on IS positions amidst the sounds of gunfire and air strikes.

The civilians are scared: IS put it in their heads that when the Kurds come, they would cut off people’s ears, and take out their eyes

Driving through the east of Raqqa, where SDF fighters are walking through rubble-strewn streets, there is huge destruction.

The damage might be worse than in the city of Mosul, some say.

“We saved a lot of civilians in the city,” said heval ("comrade" in Kurdish) Ari, the nickname of a Kurdish-Danish fighter with the SDF, who spoke to MEE after returning from battle in Raqqa.

“Some of the civilians come out in groups of three or four. Sometimes they are alone. And some Daesh fighters surrender.”

But while the Kurdish fighters have largely been portrayed in the West as the moderate, secular response to IS, many Syrian civilians in the city have been taught by IS to fear them.

“The civilians are scared: IS put it in their heads that when the Kurds come, they would cut off people’s ears, and take out their eyes,” the Danish fighter explained.

A few days ago, a small number of IS child soldiers surrendered, in make-up and women’s clothes, in an effort to look like civilians.

“They told us there are not so many Daesh left in the city, and they all try to mingle with civilians to get out of the city,” he said.

But according to coalition assessments, there are still around 400 to 900 IS militants left in the city.

Jumping over dead bodies to escape IS

Inside Raqqa, it’s now difficult to find civilians who have escaped from IS.

“We were surrounded. When the SDF attacked we had no food left.”

“We were jumping over the dead bodies to escape,” said Fatima Ali, 29.

There were mines everywhere, and IS were killing anyone they found trying to escape

“When you were walking, there were mines everywhere, and IS were killing anyone they found trying to escape,” she added.

“Even when they saw people trying to flee by, they tried to shoot them dead as well,” chimed in Ahmed, 26, who also arrived in the camp from Raqqa.

He lamented the destroyed city he would one day return to.

“Even if we go back, we will have to bring these tents with us,” he said, gesturing at their flimsy temporary homes.

“Because our houses are destroyed,” he added, saying that he believes 90 percent of the city is in ruins.

Rebuilding the city, a heavy task

Fatima too expressed concern over the destruction of her city, much of it razed to the ground in the battle to oust IS.

“It could take 10 years to rebuild, it’s destroyed to the ground,” she said.

“But we have to go back, because sitting here it’s not a solution,” Fatima added.

With a heavy task ahead of him, Nazmi Mohammed is leading Raqqa’s reconstruction project.

Speaking from just outside his office in Ain al-Issa, he said that the Raqqa Civil Council and the SDF are preparing to first clear the mines.

“On the outskirts of Raqqa, there is not a lot of destruction, and people can go back there,” he said.

“We have fixed the water plant for Raqqa, so they will have five hours of water per day,” he said.

However, other areas are much more badly damaged.

“I think more than 50 percent of the city is totally destroyed, but I am not 100 percent sure,” he said.

He expected it could take at least three to four years for Raqqa to rebuild – but, he stressed, that projection was contingent on the receipt of direct help.

Thus far, almost none of that help has arrived, he said.

“We want the same support we got from the Americans to defeat IS in Raqqa for the rebuilding of Raqqa,” he added.

“We gave a lot of blood for the battle to fight IS,” he added.

Aside from material destruction, the coalition air strikes on Raqqa have also claimed a civilian toll.

“In the eastern side of Raqqa, the destruction is minimal, they are all small houses, no high buildings,” said Ali, 28, a civilian who fled Raqqa, speaking from the IDP camp.

“But my uncle’s house was destroyed inside Raqqa, as IS had made a tunnel between his house and another, and when an air strike hit the tunnel, both houses were destroyed,” he added.

“One family was buried by the rubble due to an air strike in the Jemili neighbourhood,” Fatima Ali said.

“It was a centre for the Islamic police and all of the neighbourhood was destroyed,” she added.

The coalition should follow our lead, conduct full investigations, and find ways to make its civilian casualty assessments more accurate

On Monday, Human Rights Watch (HRW) documented the human toll of the aerial campaign against IS in Raqqa, accusing the coalition of killing at least 84 civilians in just two attacks near the city in July.

But Haqi Kobani, a senior SDF commander, told MEE that great care had been taken to protect civilians.

Without civilians remaining in the city, he said, the battle would already be long finished.

“The bombing of the air strikes is planned - if not 2,000 civilians would have been killed,” he said.

“IS forced some of them to stay; we want to ensure the civilians can leave peacefully,” he added.

Another SDF fighter said that the coalition has difficulties targeting the main hospital and the football stadium, due to the high number of civilians in these fortified places.

“The next target for the SDF, the stadium and the hospital cannot be hit, because the Americans respect international law,” Heval Ari said.

“Ten to 15 percent of the city is still under IS’s control,” he believes, but the battle will soon be over.

“In about a month’s time, everything will be in SDF’s hands,” he said.

The lack of air support in these positions will make it more difficult for the SDF to take it.

One of the most important targets for the SDF is now the hospital, which it is besieging from all sides.

“Under the hospital, IS have constructed a big command centre. And within the hospital there are around 30 to 40 IS fighters, but the Americans can’t hit it,” he said.

“They have put mines all around the hospital. So it’s difficult,” he said. “We tried sometimes to enter, but with no success,” he added.

Moreover, the north of Raqqa is littered with mines.

“You cannot walk one step without stepping on a mine, and that’s why our forces cannot go as fast as we want. That’s the problem and that’s why we can’t take Raqqa in one or two days,” the fighter said.

But even once IS is fully routed from the city, the group’s final reckoning will happen in Deir Ezzor, where both the SDF forces and the Syrian army are racing to take as much territory as possible.

Low level conflicts between the two sides, backed by the US and Russia respectively, are sporadically breaking out, with the Russian airforce allegedly hitting SDF positions in the eastern Syrian region on Monday. Moscow denied the SDF allegations.

“The battle for Raqqa is no longer the main game for the US-led coalition,” Nicholas A Heras, a Middle East researcher at the Centre for a New American Security, told MEE.

I don’t know if we will go to battle, or the Syrian government will, but I hope we will go and finish off Daesh 100 percent

“There are no longer any high-value IS targets left in Raqqa for the US military. Those are all in the area between the cities of Mayadin and Albu Kamal in Deir Ezzor.

“The fight against IS will end in Deir Ezzor, not in Raqqa,” he added.

“The big place for Daesh now is the city of Mayadin,” echoed Ari, the fighter from Denmark.

“It’s the new capital of the caliphate, and I think that will be the hardest part, and the last stand. I don’t know if we will go to battle, or the Syrian government will, but I hope we will go and finish off Daesh 100 percent.” Syria War
Raqqa children tormented by IS beheadings and bombs