Mauritanian President Mohamed Ould Abdel Aziz, who was elected by 82 percent of the vote in controversial elections over the weekend, has vowed to work for national unity and heal rifts in the impoverished nation.

Abdel Aziz, 57, pledged "to be the president of all Mauritanians and to guarantee the rights of all citizens," according to a text read out by his campaign director Sidi Ould Salem on Monday.

He will use his new five-year mandate to "pursue a policy of strengthening national unity, the independence of the judiciary, the fight against waste and social inequality as well as the reduction of poverty through a better redistribution of the nation's wealth," the statement said.

The opposition boycotted Saturday’s election dubbing it an “electoral masquerade” and slamming the vote for irregularities.

Last week, former president Ely Ould Mohamed Vall also criticised the elections and called on the international community to not recognise them.

"These farcical elections will be supervised by a non-representative commission dedicated to serving the interests of one political party," Vall said in a statement.

The National Forum for Democracy and Unity - an opposition coalition of 11 parties including a moderate Islamist movement - had rallied to denounce Abdel Aziz's "dictatorial power" and were counting on a high abstention rate.

Abdel Aziz’s camp has since claimed that voter turnout was 56 percent and that this showed that "a large part of the Mauritanian people [are committed to] pursuing [...] the process of consolidating democracy and good governance."

Four other candidates opposed the president, but Abdel Aziz’s closest rival Biram Ould Dah Ould Abeid, garnered less than nine percent of the vote, according to results released on Monday. In third place was Ibrahima Moctar Sarr, with 4.44 percent while the only female candidate in the race, Lalla Mariem Mint Moulaye Idriss took only 0.49 percent.

African Union observers supervised the vote and said they were satisfied with the result.

Abdel Aziz is a former general who seized power in an August 2008 coup and won disputed elections the following year. He campaigned strongly on his success in fighting armed groups linked to al-Qaeda at home and in neighbouring Sahel nations.

The other presidential candidates now have 48 hours to contest the results before the constitutional council confirms them.

Mauritania, nearly as big as Egypt, is a poor country but saw six percent economic growth last year. It has produced oil since 2006 and is rich in iron ore as well as fish caught off its Atlantic coastline.

One 70-year-old voter who gave his name as Brahim told AFP that the country, which experienced major militant-focused turbulence until 2010, "had found peace".

"That's important and I want it to continue because peace is irreplaceable," he said.

Kidnappings and attacks by al-Qaeda in the Islamic Maghreb (AQIM) were frequent when Abdel Aziz came to power, but he has repeatedly boasted that a string of "preventative" raids on neighbouring Mali managed to turn the tide.

In 2010 and 2011, Mauritanian troops carried out successful "preventative" raids on AQIM bases in neighbouring Mali, before the militants could carry out planned attacks on Mauritania. 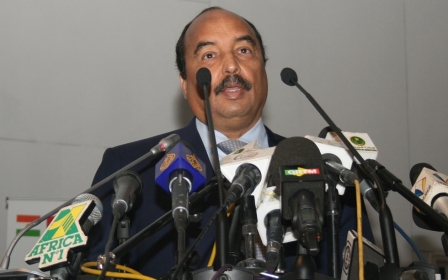