"Most of those terrorist groups and other armed groups, they are in the cities. Perhaps one wonderful scenario is: leave the cities," said UN Commission of Inquiry on Syria chief Paulo Pinheiro.

The proposal comes after the United Nations' peace envoy for Syria, Staffan de Mistura, last week suggested a deadline be set for fighters in Idlib to pull back from its cities.

UN agencies and relief organisations have warned repeatedly that any major assault on the province of Idlib, which borders Turkey, could spark one of the worst humanitarian disasters of Syria's seven-year war.

UN chief Antonio Guterres warned on Tuesday that a full-scale battle in Idlib "would unleash a humanitarian nightmare unlike any seen in the blood-soaked Syrian conflict".

The northwestern region has seen its population almost double with the arrival of Syrians displaced from other parts of the country, many of whom already depend on aid.

"All the other disasters would be minor events compared to what can happen in Idlib," Pinheiro said.

But for the second day in a row there were no air raids, after deadly strikes and barrel bombing over the weekend, said the Syrian Observatory for Human Rights.

Last Friday, Turkey, Russia and Iran failed to reach an agreement to avoid an assault on Idlib.

The head of the Istanbul-based opposition organisation Syrian National Coalition (SNC), Abdulrahman Mustafa, told Middle East Eye last week that rebel forces would not withdraw from Idlib in case of a government assault.

He said rebel groups in Idlib were trying to entice members of HTS to leave the organisation.

Three Turkish security and government officials told Reuters on Wednesday that troops, armoured vehicles and equipment had been sent to the Syrian border. A senior security source said the army has reinforced 12 Turkish military posts inside Idlib itself.

The observation posts were set up in the Idlib region last year under an accord with Russia and Iran designating Idlib and parts of neighbouring provinces a "de-escalation zone". 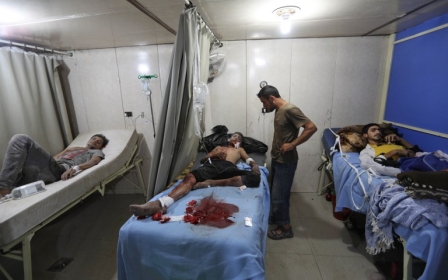