Another civilian was killed in an air strike on Eastern Ghouta on Monday, activists said A man holds a dead cat in Douma, Eastern Ghouta in Damascus, Syria, 22 January 2018 (Reuters)
By
MEE and agencies

Rescue workers in a Syrian rebel-held enclave east of Damascus accused government forces of using chlorine gas during bombardment of the area on Monday, and the Syrian Observatory for Human Rights said at least 13 people had suffered suffocation.

The White Helmets civil defence rescue force, which operates in rebel-held parts of Syria, said 13 civilians including women and children had been "injured after (the) Assad regime used chlorine gas in Douma city in Eastern Ghouta".

Activists said nine rockets containing poisonous gases were dropped on Monday morning, and a total of 150 people had been affected.

Douma is in the Eastern Ghouta, a suburb east of Damascus where almost 400,000 people have been under siege by the Syrian government and allied militia since 2013. Eastern Ghouta is the last major rebel position close to the capital.

Elsewhere in Eastern Ghouta on Monday, one civilian was killed in government air strikes, in the neighbourhood of Erbin, according to activists.

#Watch... @SyriaCivilDef teams rush an infant and her parents to a nearby medical point. The baby and her parents were exposed to bombing with missiles carrying chlorine gas targeted the residential neighbourhoods in #Douma city in the #EasternGhouta. pic.twitter.com/nyppttqi8t

The health directorate for opposition-held areas in the Damascus region said patient symptoms "suggest they have been exposed to chlorine gas inhalation".

It said patients said the smell around the attack site resembled chlorine.

The Syrian army and government have consistently denied using chlorine or other chemical weapons during Syria's conflict, now in its seventh year.

The EU last year blacklisted over a dozen high ranking Syrian military officials and scientists over chemical weapons attacks on civilians inside Syria.

The Observatory said a gas was also used during a rocket attack last week on the enclave.

A witness in the area said people had fled the area of the attack and were receiving treatment for breathing problems at medical centres.

In the past two years, a joint UN and Organisation for the Prohibition of Chemical Weapons (OPCW) inquiry found the Syrian government used the nerve agent sarin and has also several times used chlorine as a weapon.

It has also said Islamic State has used sulphur mustard. 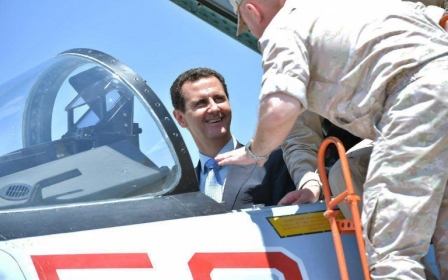