From outrage to indifference, MEE talked to Palestinians and Israelis about the closing of East Jerusalem 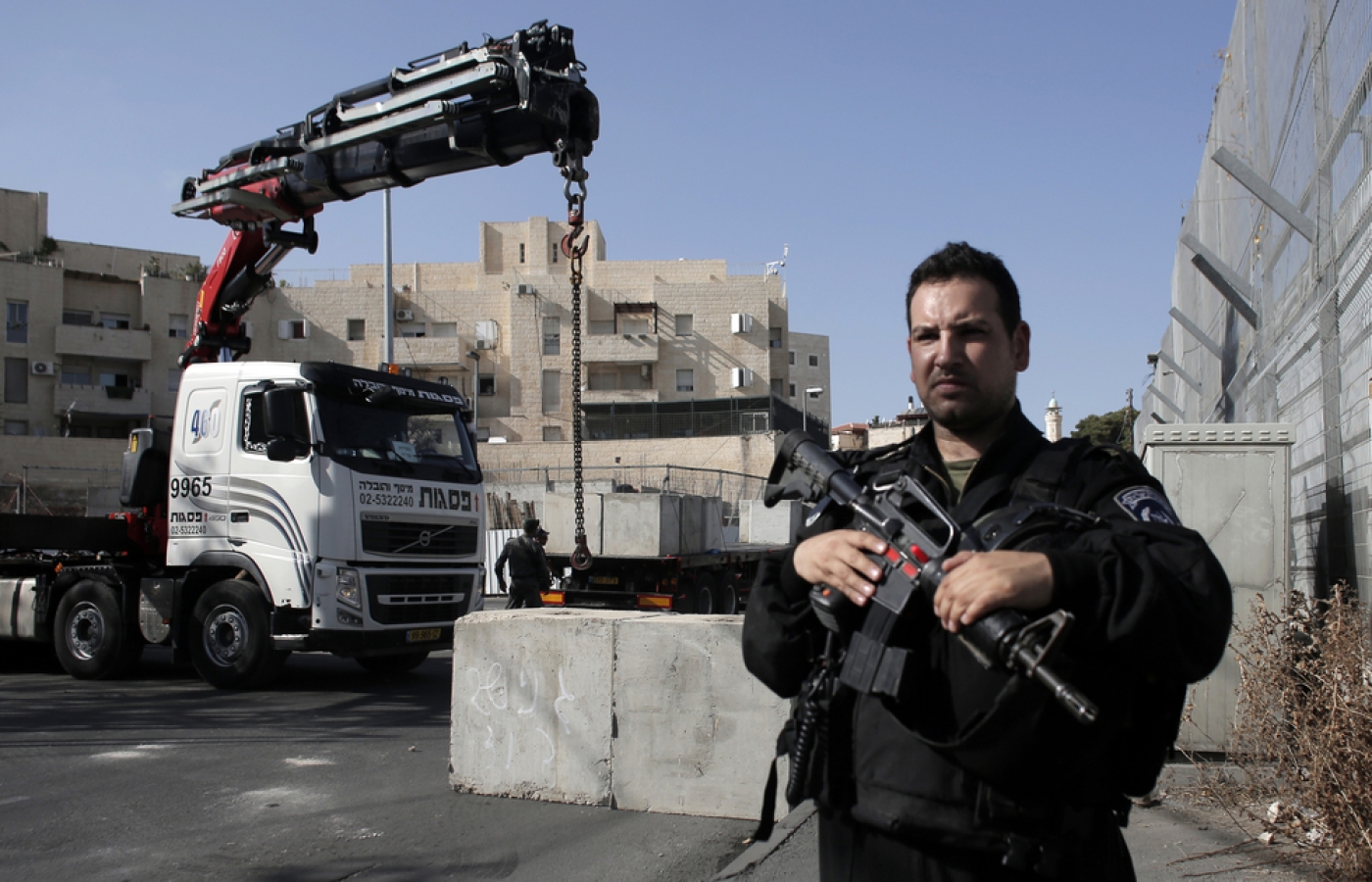 EAST JERUSALEM, Occupied Palestinian Territories - In Ras al-Amud, in occupied East Jerusalem, a crowd gathered on Wednesday at one of the Palestinian neighbourhood's few entrances. Some 20 Israeli police officers guarded the area as workers operated a large crane that lowered concrete blocks on the road.

The sealing off of East Jerusalem is part of the measures approved early Wednesday by Israel’s security cabinet to prevent further attacks on Israeli citizens.

“These are necessary steps to ensure we control the situation in order to prevent terrorists from leaving these areas,” police spokesman superintendent Micky Rosenfeld told journalists.

“Road blocks have been set up to ensure we have control of the vehicles which are coming in and out of the neighbourhood,” he added.

The evening before, addressing a special Knesset session, Israeli Prime Minister Benjamin Netanyahu had warned: “Anyone who raises his hand to harm us will pay dearly. And we will not hesitate to use all means at our disposal to restore peace to the cities of Israel.”

Thirty-two Palestinians and seven Israelis have died in the violence since 1 October. The majority of Palestinian attackers hail from East Jerusalem. Three came from the neighbourhood of Jabal Mukabber, while one of two attacks on Wednesday was carried out by a youth from Ras al-Amud.

Although Israeli police describe these recent attacks as "lone-wolf" acts, rather than organised operations, the security cabinet identified East Jerusalem - where an estimated 300,000 Palestinian citizens of Israel live - as the target of its security measures.

Roads in Jabal Mukabber and Ras al-Amud were largely deserted on Wednesday at peak hour, indicating that Palestinian residents of Jerusalem are likely being cautious, afraid of violence at the hands of the public or the authorities. But some residents came out to observe the new changes.

Munia Khasem, 55, watched the police block the road she uses to reach the Old City. Khasem believes this kind of approach is counterproductive.

“Do you think this will stop violence?” she asked as cranes lowered down the cement roadblocks.

“They are calling for violence. They are coming to tell us this is not our city. They are occupying us, we are not occupying them.”

Khasem remembers a time during the Second Intifada when a similar sight greeted her.

“There were road-blocks here back then too. They removed them when they made the apartheid wall over there in Abu Dis,” she said pointing into the horizon. “And now I don’t know what kind of wall they are going to build.”

Before Israel began building the separation wall in 2004, East Jerusalem neighbourhoods like Ras al-Amud and Jabal Mukabber were gateways to the West Bank. Today, however, they have become literal dead ends. These neighbourhoods bear the signs of a de-development caused by years of neglect by Israeli authorities.

Israel unilaterally annexed East Jerusalem in 1980. An estimated 300,000 Palestinians live in East Jerusalem next to 200,000 settlers. As the United Nations Office for the Coordination of Humanitarian Affairs (OCHA) points out, most Palestinian Jerusalemites do not enjoy full citizenship nor a secure legal residency status, despite holding Israeli IDs. Since 1967, roughly 14,000 have had their residency permits revoked.

The lack of building permits has led to illegal construction and subsequent demolitions by authorities. OCHA estimates that 2,000 Palestinian structures have been demolished since 1967.

Palestinian institutions have no jurisdiction in East Jerusalem and the last Palestinian presence in the city, the former Palestinian Liberation Organisation (PLO) headquarters at Orient House, was shut down by Israel during the Second Intifada in 2001.

“There is a brutal occupation that controls all aspects of life in Palestine, but particularly in East Jerusalem,” PLO spokesman Xavier Abu Eid told MEE.

“Israel was very keen in closing all Palestinian institutions in occupied Jerusalem, especially Orient House, but also many others that provided services to our people. Not to reopen them is one of the many Israeli violations to signed agreements.”

Back in Ras al-Amud, Khasem believes that this new separation will not be permanent. “If they want to cut us off, they will lose,” she said. She motions towards West Jerusalem.

“Most of our people work there for low wages. We are connected through the economy, we depend on each other. There is only one way to end this peacefully, and it is by ending the occupation.”

Outside, 28-year-old Issam Khayyat, is standing outside the local butcher's shop, watching traffic intensify. For him, this is life as usual. “It doesn’t matter if they block the road, if they take our Blue ID and give us a Green ID, Jerusalem remains our city,” he told MEE.

“We have seen all this before,” he added. “There’s a wall over there, a road-block here, it makes no difference to us. Now I can’t go to pray in Al-Aqsa, no problem, I pray here on the street, outside our mosque. Jerusalem is inside us, they can’t take it away."

Next to the roadblock, large buildings have been taken over by Jewish settlers for the past five years. “It is a paradox that they are the ones living in fear,” Khayyat commented pointing at their security cameras and guns. “Look, they have the army to protect them and yet they are afraid.”

Across town in the Markaz Falafel shop on Hanevim Street in West Jerusalem, Jewish owner Moti said he refused to be afraid after the escalation of violence in recent weeks. “I can see that people feel fear. I’ve lost a lot of business in the past week - the streets are empty.”

He thinks it is paramount to get past this moment. “I have had this shop for 40 years and I’ve seen a lot happen around here,” he said. “Now there are crazy elements on both sides doing these things, but I believe in a couple of days everything will be back to normal.”

In Musrara, a historically Palestinian neighbourhood taken over by Israel in 1948, and the site of a recent attack, 27-year-old Israeli Jewish student Boaz Attias said he was used to the situation exploding once a year. “This is Israel,” he told MEE. “Things heat up and then calm down.”

Although he believes things will return under control, he doubts the current approach will solve the problem quickly.

“Right now, we are talking about single individuals carrying out attacks,” he said. “So it’s not army against army or state against state.” A more long-term solution, he argued, is one state in which Jews and Palestinians enjoy equal rights.

“These steps strengthen the apartheid regime on the ground, turning occupation into annexation and eventually Jerusalem into an exclusive Jewish city,” he told MEE.

“Israel's vision is not one of coexistence but one of apartheid, one state and two different systems, one for privileged Jewish citizens and one for Palestinian Christians and Muslims.”

Back in Jerusalem's Old City, the site on Wednesday afternoon of an alleged knifing attack outside the Damascus Gate, police spokesman Rosenfeld said he believes the extra 1,500 police officers on duty and the roadblocks are the right solution.

“If we hadn’t taken these measures, there would be more tensions and more attacks,” he told MEE. “The situation is under control.”