Return to Tahrir: an account of the protest after the Mubarak verdict 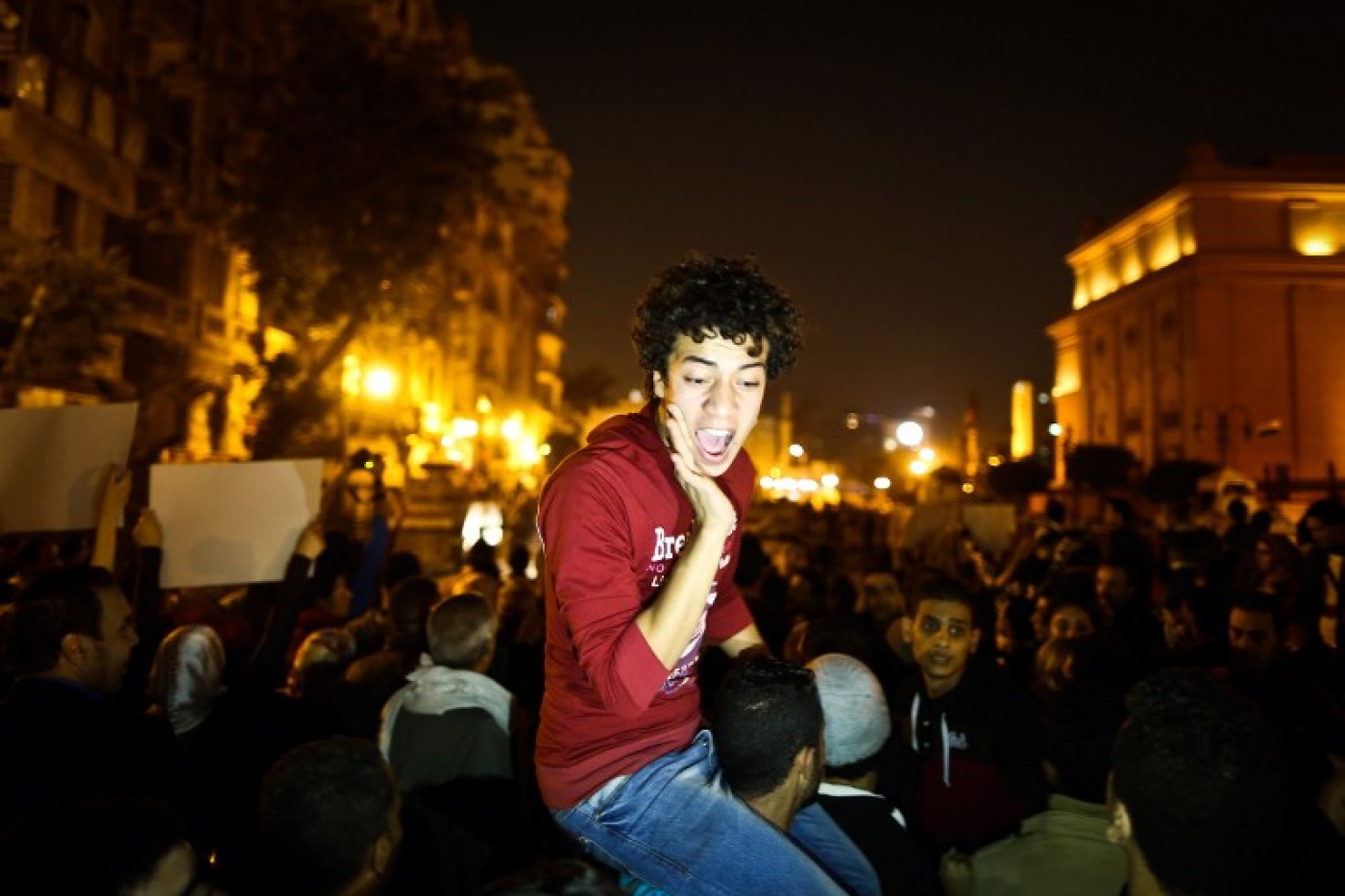 CAIRO - Outside a courthouse here on Saturday, supporters of former president Hosni Mubarak outnumbered the relatives of the hundreds of people killed during the January 2011 Revolution. Inside the court, judge Mahmoud al-Rashidi cleared Mubarak, his Interior Ministry Habib al-Adly and several senior police officers of the murder of protesters because he said charges were “politically motivated”. Mubarak and Adly had been sentenced to life imprisonment in June 2012, while the security officers had been acquitted. The Court of Cassation ordered a re-trial due to a technicality, which resulted in the clearance from all charges.

While Mubarak’s supporters celebrated around the city, many quietly expressed their shock for how the state failed to enact justice and acquitted itself. Despite the potential to be sentenced for up to 11 years in jail for assembling illegally, later in the evening, around 2,000 people gathered just beside a sealed-off Tahrir Square, to peacefully express their outrage at the police’s impunity for killing protesters.

“The people want the downfall of the regime”, one of the main chants of the anti-Mubarak uprising, echoed again through the square with protestors standing in front of the military tanks, many looking at each other, thrilled and not quite able to believe what was happening.

According to the Ministry of Health, two demonstrators were killed by live ammunitions shot in their chests during the protests. Another demonstrator is in stable condition with a perforated lung and around 129 were arrested when police moved in to disperse them.

The protest was relatively small compared with those that took place after Mubarak’s removal, under the Supreme Council of the Armed Forces' rule and Mohamed Morsi’s government. Protests with similar numbers organised by Islamists and anti-coup movements still happen every week around the country. However, it had been a long time since this many demonstrators were able to get so close to Tahrir, the square where it had all begun.

Nostalgia for older political battles, a rush of adrenaline and sadness for being kept out of Tahrir where all mixed in the shining eyes of the bystanders. Overall, excitement ran high.

“I had to come. I had to see it and be here,” said Shadi, a 26 years-old from Cairo. Lately, Shadi said he had grown tired of political activities, sitting in his house to avoid any escapades downtown. That all changed on Saturday.

“I do not know how long it will last before the police will put an end to it, but this feels good,” he said while hugging Ahmed, another long-time prominent activist.

Ahmed walked around, dodging flag vendors who ran to join the protest, sensing a business opportunity. He was constantly on the phone, calling friends who were unsure whether to come or not because they still face charges for other peaceful protests. Other friends were updating him on what political parties, groups close to the Muslim Brotherhood and the police were deciding to do.

“Security forces might let us protest because they already let too many people get here, or they might just crash us using an excuse, who knows?” he said while lighting another cigarette.

Abdel Moneim al-Riad, the space adjacent to Tahrir Square, where protesters gathered, could be every urban planner’s worst nightmare — a huge crossroad of busy streets intersecting each other, overlooked by a bridge and its ramps. In the middle, surrounded by fences, stands one of the main bus stations of the city. In the past, it has been the site of some of the fiercest clashes as it is too large to be controlled and secured, with potential threats coming from all different directions.

Tensions rose on Saturday when the news that pro-Morsi groups might join the protest spread. Protesters swayed from one edge of the square to the other, their frantic eyes rolling around to glimpse any suspicious movement. Chants against the regime, calls for unity between protesters of different factions and animated discussions could be heard coming from knots of people, an overlapping cacophony of political polarisation.

Ever since ousted president Morsi’s constitutional declaration in November 2012 which granted him overarching powers over the judiciary - a move some analysts defined as an “auto-coup” that could have given him absolute powers - secular and Islamist protesters have failed to unite against Mubarak-era politicians and the army. President Abdel Fattah el-Sisi’s rhetoric of the “war on terrorism” - which protesters feel encompass every opposition group to the government and not only militants - has further weakened the secular-revolutionary opposition’s efforts to portray itself as an alternative to both military and Islamist rule.

If the pro-Morsi protesters joined on Saturday evening, Ahmed explained, “We might clash with them, as political differences are still deep and we do not want the state propaganda to label this protest as Islamist”. Then, he paused and said, “We could join forces, but police would have the excuse to attack us immediately."

Later on in the evening, as Ahmed anticipated, the Ministry of Interior issued a statement claiming that police intervened because Islamists had taken over the protest and started attacking other protesters with stones. However, that was not what appeared to happen as the pro-Morsi protesters witnessed by the Middle East Eye arrived quietly, refraining from chanting their slogans, and were a small minority without signs.

Nevertheless, as soon as demonstrators tried to move to the furthest end of Abdel Moneim al-Riad to hold the police back and prevent them from entering from that side of the square, at the entrance of Tahrir, the army tanks rolled back. People rejoiced and swayed back towards the square. Police trucks and armoured personnel carriers replaced the military vehicles that had been in front of the protesters, but they did not turn on their sirens to warn of an imminent attack.

“Look!” said Ahmed, pointing out that the vehicles had water cannons. Before he was able to finish his sentence, teargas canisters started to fly over protesters’ heads, the rumble of shots filled the air and the crowd was engulfed in a cloud of dense smoke.

Everyone ran into a hectic labyrinth of streets, while other canisters are flew from the bridge overhead. People lurched over cars driving by, others tried to jump over fences around the bus station. Some fell in the stampede. If running out of breath was not enough, a cloud of gas came closer and soon it became evident that a police truck was chasing protesters in the square.

Protesters ran in every direction to dodge cars and motorcycles, some jumping in the first bus driving by until panicked drivers closed their doors. With police at their backs and potentially around every corner, they tried to avoid arrest.

Minutes after the demonstration started in earnest, the square was cleared of demonstrators. But policemen in anti-riot gear and special operations officers with masks and rifles stormed through the streets and alleys, even several blocks away from the site of the demonstration. Police trucks patrolled the main, now empty, streets to avoid any regrouping of demonstrators.

A series of phone calls among demonstrators started again, but this time, everyone called to make sure their friends and family were safe. Some activists gathered at a popular café in downtown, exchanged greetings and walked away, looking for a safe place to stay or a safe way to go home.

Hassan walked down the street next to the Ministry of Interior, where plain-clothes policemen stood at every corner. He tried to act as normal as he could, concealing an expression of pain on his face.

“A rubber bullet hit my leg,” he whispered, “but I had to keep walking normally or they might arrest me as they did with a friend who was with me.” A few streets down, his friend, Said, held his stomach when no one was looking. He was shot by a pellet, but he said he was too scared of ending up in jail to care now.

Saturday’s clash with the police was not as bad as other clashes in the past. The two friends said they weren’t even sure what happened could be called clashes because the police cleared the area before protestors could oppose their presence. As the two tried to figure out what had happened, far away, somewhere near Tahrir, another round of shots could be heard. A few demonstrators tried to regroup, but they were immediately chased away by the police. 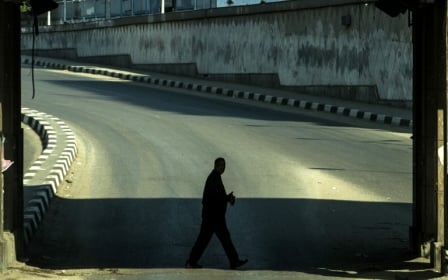 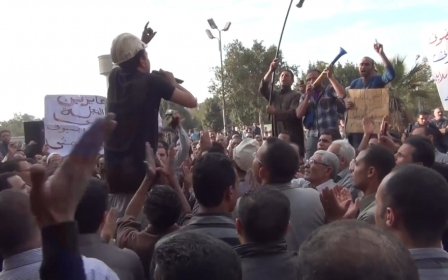 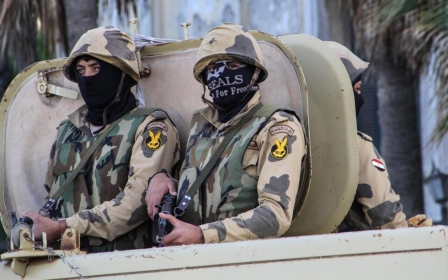