Shoukry is heard discussing by phone the Egyptian side's negotiating position on the controversial transfer of Tiran and Sanafir, and asking for Israel's support.

The agreement, announced in April 2016, caused a public uproar and rare mass protests by Egyptians, who insist that the uninhabited islands of Tiran and Sanafir are Egyptian.

The government says the islands have always belonged to Saudi Arabia and that Egypt had merely administered them while on lease since the 1950s. Critics, however, accuse President Abdel Fattah al-Sisi of "selling" the islands in return for Saudi investments.

The leaking of the phone conversation, broadcast by Egyptian opposition TV channel Mekameleen on Friday evening, hints at the level of internal dissent in the government in Cairo.

Friday's broadcast was the latest in a series of leaks from the heart of the Egyptian government, and is bound to cause further embarrasment for Sisi.

Shoukry tells Molcho: "I will agree to what you proposed: 'The ARE [Arab Republic of Egypt] will not agree to any amendment to the agreement without the prior, formal consent of the GOI [Government of Israel],' OK?"

This is the first time Israeli involvement in the charged Red Sea islands dispute has been proven.

The two diplomats were discussing the language surrounding two official letters that would be exchanged between Egypt and Israel regarding the Red Sea islands, with Shoukry reading the top of one letter: "... concerning the agreement on the limitation of maritime borders signed by the ARE and the KSA [Kingdom of Saudi Arabia] on 8th April on the draft agreement regarding arrangements between the two governments concerning the mission of the multilateral forces and observing the status of Tiran and Sanafir."

The Egyptian foreign minister was explicit as to what his phone call with Molcho was meant to achieve: "We are completing so as to finalize the issues that we can deal with, so that we can be in a position to implement as soon as the court process is over.

"So there is a completion of the process from the trilateral perspective for you [Israel] and us [Egypt] and they [Saudi], and then as soon as the court proceeding is finished we will undertake the MFO agreement and sign it and then we will take the necessary other arrangements to convey to the MFO once we have signed that and it has entered into force."

The leaked conversation consisted of a back-and-forth between the two diplomats over the wording of the two letters, but only Shoukry's voice can be heard.

The Israeli diplomat seemed to have the upper hand in the negotiations.

"You had asked on the fourth line to include the word 'enduring,' I am going to go ahead and accept that, OK?” Shoukry told Molcho at one point.

"Let me try again to accommodate you, you can I hope recognise how much I am trying," the Egyptian foreign minister said later. Shoukry at times seemed frustrated at the amount of ground he was giving to the Israelis.

"When we were together we had discussed the termination of this paragraph," he told Molcho. "You were supposed to come back to me in accepting that formulation that we arrived at together ... but you have added on an additional three lines that we did not discuss during our meeting and you did not propose."

At another point in the conversation he puts the Israeli diplomat on hold and, in Arabic, asks his colleagues: "What do you guys think? I think I should return to the original copy, it's more definitive ... It's more acceptable legal lingo."

Near the end, however, Shoukry's exasperation gets the better of him: "I have a lot of issues to be honest with you but it's late on a Thursday night and I think we both deserve some rest."

These latest batch of leaks come only two weeks after discussions – with voices attributed to Shoukry and Sisi himself – were made public.

Those leaks in turn came 18 months after earlier recordings – also made public by Mekameleen – revealed far-reaching Emirati "interference" in Egypt, as well as the extent of Sisi's control over domestic media outlets.

The 2015 leaks were the result of a phone-tapping operation that targeted Sisi's chief of staff, Kamel Abbas.

An investigation of the earlier leaks by independent audio forensics experts in the UK revealed a "moderately strong" probability that the taped conversations were genuine.

The new leaks could not be immediately verified.

It is apparent that the person on the other end of the phone line is Yitzhak Molcho, whose name Shoukry mentions a number of times.

"Hello Yitzhak," he says clearly at the start of the recording.

Later on he says: "Sorry you broke up there Molcho, repeat again," then "Thank you Molcho for your patience."

At the end he says: "Pleasure, Yitzhak to do business with you, thank you so much."

Shoukry visited Israel on 10 July, 2016 in the highest-level visit by an Egyptian official in almost a decade – and Molcho was credited for bringing it about.

"Before we go upstairs," Netanyahu said at the news conference with Shoukry, "I want to thank my trusted special adviser and personal envoy Molcho for all that he does to strengthen Israeli-Egyptian relations and for his work in preparing today's important meeting.”

Molcho, 72, has known Netanyahu since the age of 16 when they grew up in the same neighbourhood, and is "arguably Netanyahu's closest and most trusted adviser," according to JPost. Officially, he is Netanyahu's special envoy dealing with the Palestinian diplomatic track.

He advised Netanyahu when the latter first took power in 1996 and again in 2009, when he returned to power.

Michael Herzog, brother of opposition leader Isaac Herzog, told JPost of Molcho: "He is very secretive. He works below the radar. When you meet him, you know it will not be leaked. You know that if it leaks it is not because of him, it is because of others. People know that they can deal with him without being exposed, because he is so confidential. He doesn't talk to the press. Whatever you talk to him about remains in a closed room; it does not become public knowledge."

Shoukry has had his share of gaffes since being appointed foreign minister on 17 June, 2014.

In a news conference with his Mexican counterpart, he read out a prepared statement – including the phrase "end of text" at the end of document. The clip went viral in Egypt.

Sisi faced calls to be prosecuted for treason after a court ruling against his government over the proposed transfer of the Red Sea islands of Tiran and Sanafir to Saudi Arabia.

The hashtag "Tiran and Sanafir are Egyptian" rose to the top of Egypt's trending hashtags after the verdict, but was swiftly replaced by "One million signatures to prosecute Sisi" and "Sisi is a traitor by verdict of the court".

A top Egyptian court on 16 January rejected the plan to transfer the two uninhabited Red Sea islands to Saudi Arabia.

The government had appealed against a lower court ruling in June that found that the controversial border demarcation agreement was illegal.

But the courtroom erupted in cheers as the judge delivered the final verdict on the issue, with lawyers and activists chanting: "These islands are Egyptian."

The islands' saga deeply wounded national pride and brought people out onto the streets in a public show of dissent against Sisi's government. 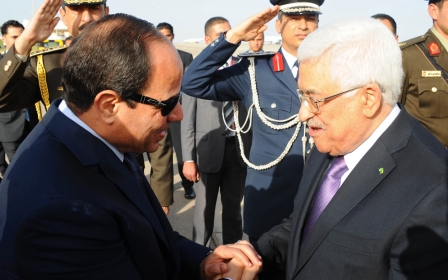