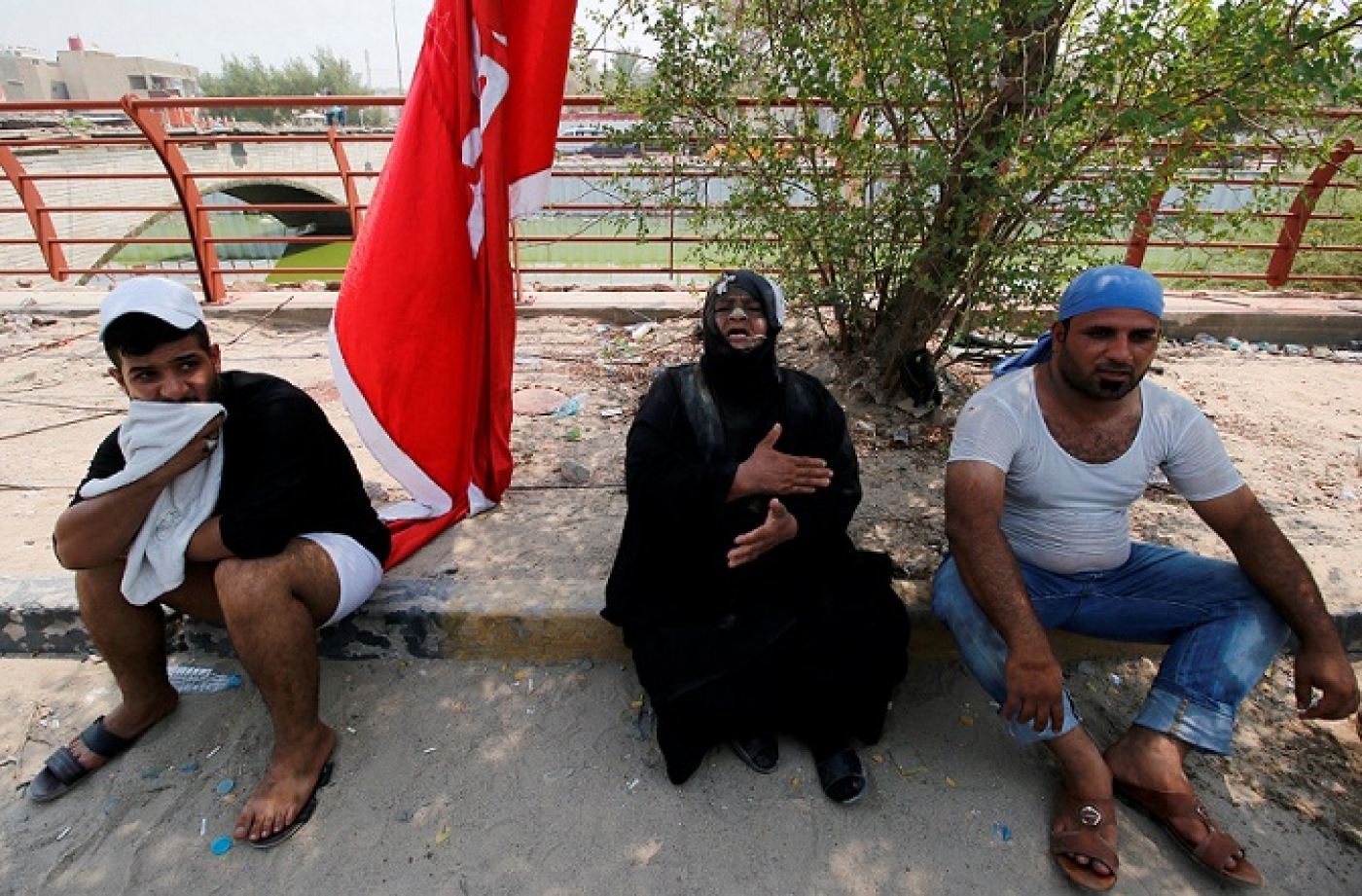 Mourners at the funeral of Maki Yasser al-Kaabi, a protester killed in Basra on Monday (Reuters)
By
Alex MacDonald

Iraq's main political blocs are still in deadlock over forming a new government as parliament meets for a second day after failing to elect a speaker on Monday.

As political struggles carried on in Baghdad, one man was killed and six others were wounded late on Monday in Basra as protests over power shortages and water cuts that started in July continued.

New MPs elected in the May parliamentary elections were sworn in on Monday, while the fractured political groups in parliament coalesced into two major blocs, which will put forward rival proposals to form the new government.

The similarly named Construction bloc is made up of an array of Iran-backed groups, including Hadi al-Ameri's Fatah coalition and former prime minister Nouri al-Maliki's State of Law coalition.

Both blocs have claimed to have the biggest group in parliament.

MPs were expected to elect a speaker - usually a Sunni, according to informal procedures - and two deputy speakers in the first session of parliament, which is chaired by the eldest MP (in this case, Mohammed Zainni). However, no agreement was reached on Monday.

Following the election of a speaker, the parliament has 30 days to elect a president. The president then has 15 days to put together the biggest parliamentary bloc to form a government.

Both of the blocs claim to have more signatures than the other. Although the Abadi-Sadr alliance announced on Monday it had 177 lawmakers out of the 329-seat parliament on side, the Ameri-Maliki camp - which claims to have 145 members - said that several members of Abadi's Nasr coalition had defected.

Although the official rules state that signatures from the heads of political coalitions are needed to declare the biggest bloc in parliament, the Ameri-Maliki camp is disputing this, arguing that signatures from individual MPs should be taken. The dispute has reportedly been referred to the federal supreme court of Iraq.

Raid Fahmi, the General Secretary of the Iraqi Communist Party - which is part of the Sairoun Alliance - told Middle East Eye that his camp were also collecting signatures from individual MPs and hoped the problem would be resolved.

“Either this should be settled by the federal court or through negotiation we reach a kind of agreement,” he said.

The biggest defection from Abadi's camp came last week after Falih Alfayyadh - head of the powerful Hashd al-Shaabi paramilitary units until Abadi fired him last week - indicated that he planned to defect to the Ameri-Maliki camp.

Abadi announced on Monday that he would be taking over control of the Hashd al-Shaabi himself and praised their "heroism" in defeating the Islamic State group.

"The next government will be handed a united, liberated country, with security, social stability, and a basis to improve the economic conditions and meet the expectations of our people in a better life,” said Abadi, speaking to the assembled lawmakers.

"There is no other alternative to the imposition of state authority and rule of law, and no other banner shall rule supreme over the banner of one Iraq, and there is no room for arms outside state control."

The government formation process is takeing place against a backdrop of spiralling unrest in southern Iraq, where protesters have repeatedly clashed with security forces as they demonstrate against power cuts and water shortages.

Local health and security sources said five protesters had been killed and 16 more had been wounded on Monday night after police fired on demonstrators in Basra, Iraq's southern oil hub.

A video released on social media showed the father of Maki Yasser al-Kaabi - the protester killed on Monday - being shown his son's body in the morgue and praising him for “fighting for the rights of the people of Basra".

Video of the dead protester in #Basra at the morgue, at the time being received by his father. The man in the video claiming to be the father stated, “He went out to ask for clean drinking water.” People outside mourning his death. #BasraProtests #Basrah #البصرة_تنتفض #البصرة pic.twitter.com/EIYlaSd6EE

The local head of Iraq's human rights commission called for an immediate investigation into the protester's death.

"We call on the Iraqi judiciary to open an immediate and urgent investigation into the killing of a demonstrator who was shot in the shoulder and subjected to electric shocks by security forces," Mahdi al-Tamimi said in a statement.

Protesters returned to the local government office on Tuesday carrying al-Kaabi's body, chanting "Yasser's blood will not be lost."

Fahmi said that the death of al-Kaabi and the continuing unrest being generated by the protests meant it was imperative that a new government was formed and that the problems in the region were addressed.

"Conditions, particularly with regard to water, are becoming unbearable," he said.

"All this makes it urgent that the problem should be dealt with politically, financially, technically and in terms of providing essential services."

He added that he was deeply concerned about the threat to the right to freedom of expression in Iraq and the use of live ammunition by security forces.

Although Abadi last month suspended the Iraq electricity minister and has promised rapid action to improve services in Basra, demonstrations have continued unabated.

Since 12 August, at least 17,000 people have reportedly been admitted to hospital in Basra as a result of polluted water, according to Basra's health department.