The road is only the latest bid to confiscate Palestinian lands, as the US comes out in support of Israel's West Bank settlements 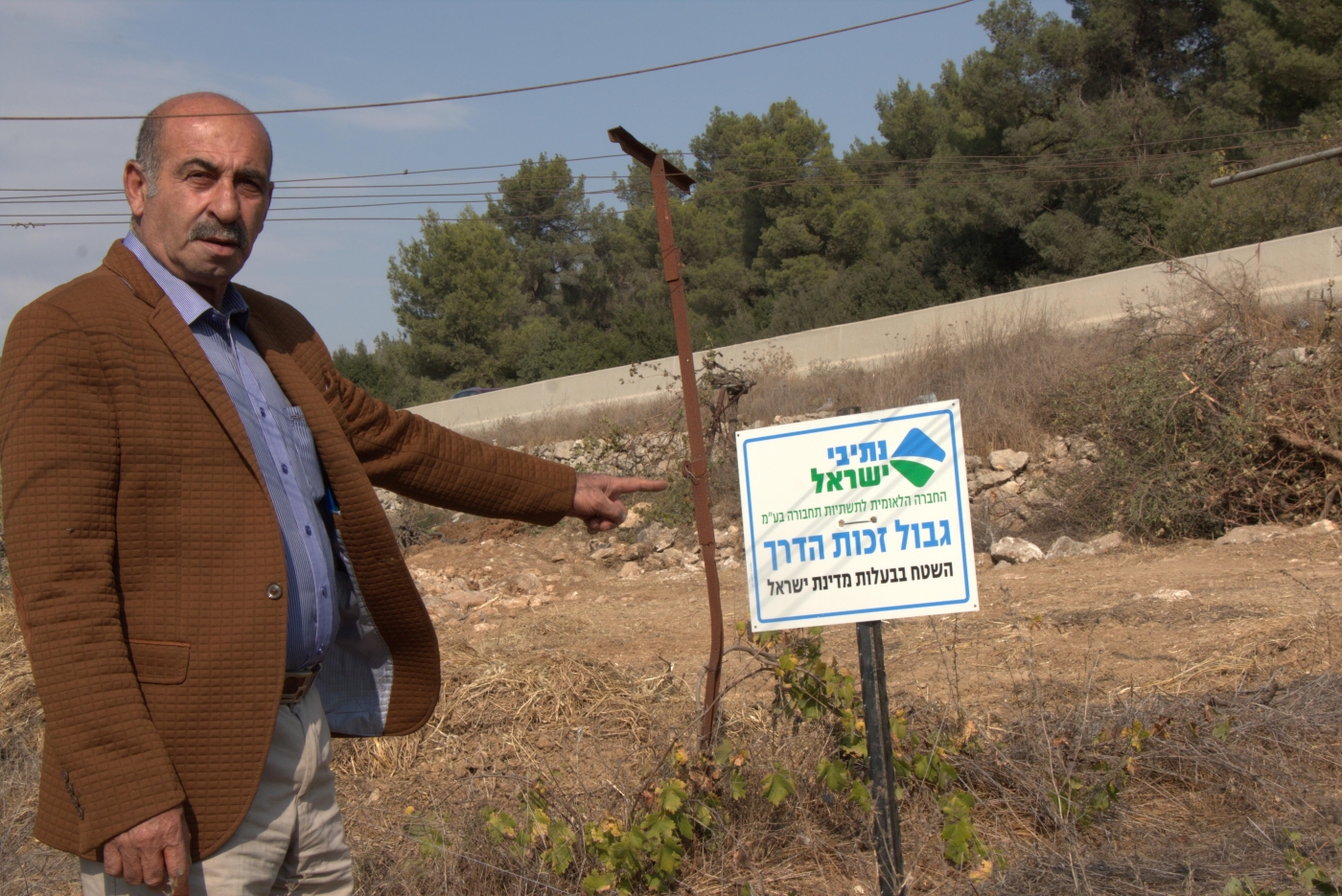 Earlier this month, Fathi Ismaiin, 63, got a call he had hoped he would never receive in his lifetime.

Israeli forces had arrived in his village of Beit Ummar with bulldozers, and were cordoning off farmland in the area. His land, he was told, was being taken. “Myself [and] the other villagers rushed to the area to see what was happening and see if we could stop it,” Ismaiin told Middle East Eye outside his home in the southern occupied West Bank’s Hebron district.

When he arrived on the scene, Ismaiin was told that his land, along with the land of several other families in the village, was being confiscated with immediate effect in order to build a new access road for Israeli settlers in the area.

“They demarcated the area into two sections,” he told MEE. “One that we would still be able to access and one that we no longer could.”

Of the three dunams (0.3 hectares) that Ismaiin owned in the area, he was told he now only had access to half, the other half was to be used for the road.

“All my land, my family’s livelihood, that I have poured my sweat and blood into will be gone,” he lamented. “And for what? A new road for the settlers?”

With the United States administration announcing earlier this week that it no longer deemed Israeli settlements in occupied Palestinian territory to be in violation of international law, many like Ismaiin fear that the move might further encourage Israel to confiscate Palestinian lands.

‘This road will kill our land’

The village of Beit Ummar, north of Hebron city, is home to some 18,000 Palestinians.

Surrounded on all sides by Israeli settlements, highways, and permanent military bases, the village is no stranger to the occupation.

“Beit Ummar is under attack from the Israeli occupation every day,” Khalda Abu Ayyash, 50, an engineer with the local municipality, told MEE matter of factly.

“We stand between three major settlements - Gush Etzion, Efrat, and Beit Ein - making this a strategic geographic location for the Israelis,” she continued, pointing out that “there is not a single part of Beit Ummar untouched or unaffected by the occupation”.

According to Abu Ayyash, the townspeople were first made aware of Israel’s plans for the new road back in 2011.

“We were told they would be constructing a new road for the settlers, starting from Gush Etzion, passing through Karmei Tzur, this land in Beit Ummar, and then connecting to Route 60,” she said, pointing in the direction of the road, a major artery of the West Bank connecting the north to the south.

At the time, Abu Ayyash said the exact plans for the road were elusive, and that Palestinians weren’t given much information.

“From time to time over the years, they have given us notices saying they were confiscating more land from Beit Ummar for various ‘security reasons’,” she said. “But there was no movement on this planned road, until two weeks ago.”

After much pressing from municipality officials and local farmers, Israeli authorities present at the scene on 3 November agreed to show Palestinians the blueprints for the new road.

“We were stunned,” Abu Ayyash said. “We are talking about an eight-kilometre long road, 50 metres of pavement in width,  and a security perimetre of some 200 to 300 metres around the road that the villagers will be banned from accessing or building on.”

Abu Ayyash estimates that some 46 dunams (4.6 hectares) of Beit Ummar’s land will be completely destroyed for the construction of the road, while another 707 dunams  (70.7 hectares) will become a restricted area, comparing it to the “dead zones” around Israel’s separation wall that became inaccessible to Palestinians after the barrier’s construction.

She added that between Beit Ummar and the neighbouring town of Halhul, some 1,273 dunams (127.3 hectares ) will be confiscated by Israel.

“This road is killing the land,” she said.

For many of the residents of Beit Ummar, agriculture provides a stable source of income in a troubled and unpredictable Palestinian economy.

According to Abu Ayyash, the majority of the village depends on local agriculture for their income. Without it, she says, they have nothing.

“Beit Ummar’s lands are famous in Hebron and across the West Bank for its crops, particularly grapes. If a piece of land does not have a building on it, it is likely lush with grape vines and other crops.”

'I have invested tens of thousands of shekels into maintaining and farming and planting the land...We are devastated'

“So today the Israelis are not just stealing land, but they are attacking one of the most important aspects of life for the people of Beit Ummar,” she continued. “They are not just destroying the land, but our economy as well.”

One of the people set to suffer extreme losses is Fathi Ismaiin. “The three dunams I own were passed down to me by my forefathers. I have invested tens of thousands of shekels [thousands of dollars] into maintaining and farming and planting the land,” he said.

“Most of my trees - almond trees and plum trees - are hundreds of years old,” he said, gesturing at the size of the trees, which he says are larger than him.

“My family always benefitted greatly from selling plums and other crops,” he continued, pointing out that it was his entire family’s only source of revenue for the entire year. “We are devastated.”

Despite the fact that Ismaiin is still allowed to access the 1.5 dunams of his land not seized for construction of the road, he doesn’t anticipate that it will last very long.

“We have seen this countless times with other villages in the West Bank. Whenever Israeli builds a wall or a road or a military tower, they turn the area around it into a closed military zone,” he said.

“So I might still have half of my land now, but who's to say it will still be there in a few months or a year?”

It’s been nearly 3 weeks since Israeli forces began working on the road in Beit Ummar, and things don’t seem to be looking up for the villagers.

Every resident that MEE spoke to expressed their concern over the fact that they were told the decision to build the road was a military order, making it impossible to appeal in civil courts. 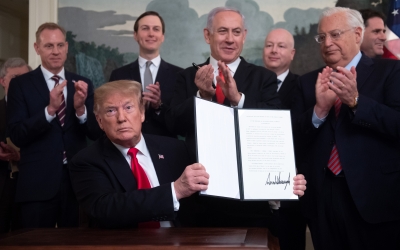 Yusuf Abu Maria, 45, a local activist in Beit Ummar, told MEE that the Israeli captain responsible for the area told him and others that the military order “was above the court”.

“They told us our only option now is to attempt to get compensation for the land that is being taken from us, but that we cannot get the land back,” he continued.

When asked if the villagers would consider giving up their land for monetary compensation, Abu Maria scoffed.

“We will not take bribes from them,” he said, “and we will keep fighting to get our land back.”

While Abu Ayyash and Ismaiin expressed hopes that the international community would intervene on behalf of the villagers to save their land, Abu Maria said he wasn’t holding his breath - and US President Donald Trump’s latest decision to acknowledge Israeli settlements as legitimate only a few days later have only confirmed his reservations.

“So long as the PA remains silent on this issue and others like it, we will continue to question our leaders and what they are doing,” he continued.

“It’s up to all of us, we all have to work together to save all the Palestinian lands that are being stolen from us every single day.”