A number of Katyusha rockets were launched from the Taji area landed near Camp Al-Nasr west of Baghdad, says Iraqi security officials "A number of Katyusha rockets landed near Camp Al-Nasr (Victory), west of Baghdad," the security command responsible for the capital said in a statement, referring to a base close to the airport.

The rockets were launched from the Taji area, north of the capital, it said.

The Baghdad Operations Command later posted images on its Facebook page showing a heavy truck with 40 tubes for launching rockets facing outward from the back of the bed, saying the vehicle was used in the attack.

A police colonel told AFP 13 rockets struck two areas near the airport, but said an official at the facility had reported that none hit the airport itself.

There were no immediate reports of casualties from the rocket fire.

The sprawling airport complex, which stretches from western Baghdad to the outskirts of Anbar province, has been targeted by rocket and mortar fire for years, but commercial aviation traffic is rarely disrupted.

However, multiple carriers stopped flights into Baghdad for several days after a bullet struck a flydubai jet during its descent in January this year. Iraq at War
Iraq must rein in paramilitary forces: HRW 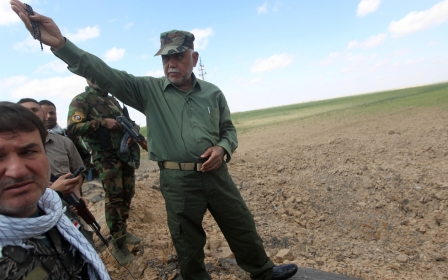