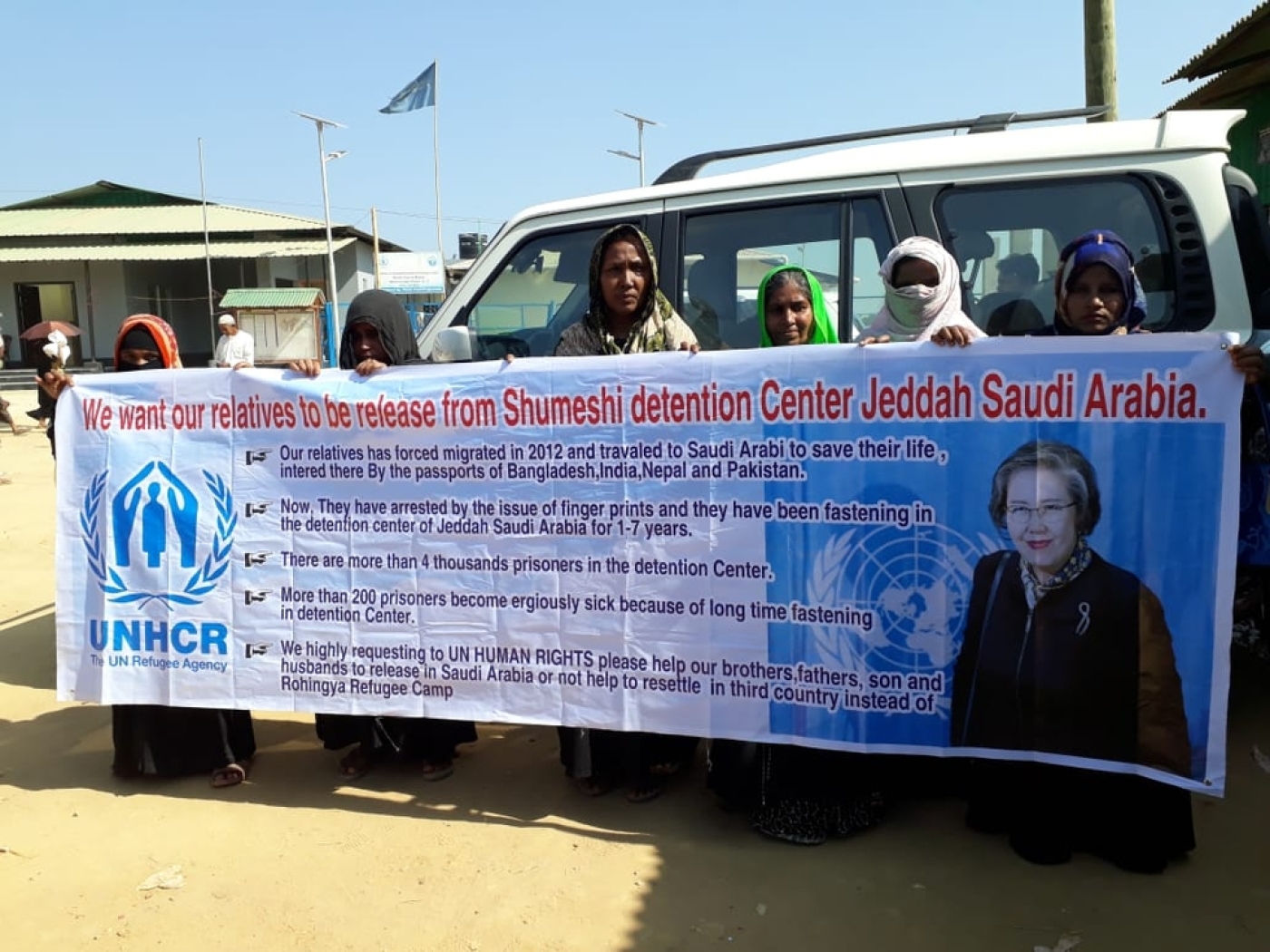 Lee can be seen walking past the women as she visited Rohingya in southern Bangladesh's Kutupalong camp who have been forcibly displaced from their homes in neighbouring Myanmar.

The special rapporteur had not responded to request for comment by the time of publication.

Yanghee Lee has not made a single statement on Rohingya in Saudi despite repeated requests. pic.twitter.com/AOMVchjgTD

Relatives of Rohingya detainees held in Saudi Arabia have held regular protests in the camp demanding their loved ones' release, which has not gone unnoticed by those stuck in legal limbo in the kingdom.

Habib, a Rohingya detainee in Shumaisi detention centre, told Middle East Eye he was "elated to see" refugees speaking up for them.

"It makes me happy seeing my sisters and brothers speaking up for all of us inside Shumaisi," said Habib, who like all those spoken to in detention has had his name changed for security reasons.

"I hope Yanghee Lee hears our sisters' pleas and does something to free us."

"Rohingya diaspora have been at the forefront of spotlighting the human rights violations happening in places like Saudi Arabia," Quinley told MEE.

"Saudi Arabia should immediately release all Rohingya refugees arbitrarily and indefinitely detained in the country.

"The Saudi government should urgently end the harmful practice of detaining children, which is against the UN convention on the rights of the child."

The silent protest comes as activists told MEE that at least 250 Rohingya detainees were being prepared for deportation to Bangladesh on Sunday, despite coming to the kingdom from Myanmar.

Zahid, another detainee inside the Shumaisi detention centre, said that the Saudis were deporting more than 200 refugees in groups of ten.

"They prepared the Rohingya detainees for Bangladesh and took them to the Hajj terminal in Jeddah for deportation," he said.

"When they took them, the Saudis took away their phones. We don't know what has happened to them, or if they are safe."

Deportations to Bangladesh, where as many as 700,000 Rohingya have fled to in the face of massacres that have been described by some rights groups as a genocide, have prompted some detainees to go on hunger strike to stop the Saudis from expelling them.

Photos and videos smuggled out of Shumaisi in recent days have shown detainees refusing to take their daily food rations, leaving them on the floor for the Saudi immigration officers to collect.

Detainees told MEE they were punched in the chest by Saudi immigration officers and forced to sign documents testifying to their "full mental health" on Saudi interior ministry forms before their deportation to Bangladesh.

Scores of Rohingya had resorted to obtaining passports from people smugglers, often via forged documents, following Myanmar's ban on members of their community obtaining Burmese passports.

Upon arrival, the refugees are told to give their fingerprint, which is registered to the passport they came to the country on. This has meant scores of Rohingya had been registered on passports obtained via fake documents.

Bangladesh has jailed more than a dozen Rohingya deported from Saudi Arabia for using fake documents to get to the kingdom - a move rights group Amnesty International has condemned.