Analysts say promised Russian scale-back 'remains to be seen,' but could be linked to domestic economic woes Russia is to withdraw its only aircraft carrier from Syria on Friday as part of a planned scale-back, military leaders said, despite more Russian military equipment reportedly being sent to Syria overnight.

"In accordance with the decision of the supreme commander of the Russian armed forces Vladimir Putin, the Russian defence ministry is beginning the reduction of the armed deployment to Syria," Russian news agencies quoted military chief Valery Gerasimov as saying.

Gerasimov said that a naval group headed by aircraft carrier Admiral Kuznetsov, a Soviet-era ship named after a Second World War navy commander, would be the first to leave the area.

"The tasks set for the aircraft carrier group during its military mission have been fulfilled," added Russia's main commander in Syria Andrei Kartapolov, agencies reported.

Some other warships are also reportedly set to be withdrawn from Syria.

However, the aircraft carrier and the warships in its group have not played a decisive role in the war so far.

Kartapolov said that Russia still had sufficient air defence capabilities in Syria thanks to its S-300 and S-400 systems, which are both deployed in the war-torn country.

Despite the withdrawal of its aircraft carrier, Russia reportedly continued sending military equipment to Syria this week.

Russian news site Riafan, which has correspondents posted in Syria, reported on Friday that the Alexander Tkachenko carrier had been sent to Syria across the Aegean Sea with "military equipment" on board.

Since September 2015, Russia has boosted its firepower on land in Syria and off the coast in the Mediterranean in support of government forces, particularly those targeting the second city of Aleppo.

Russia previously announced in March 2016 that it was withdrawing forces from Syria - however, it kept its two air bases close to the capital fully functional.

It began sending significant reinforcements back to Syria in October, and supplied crucial airpower for the campaign to retake Aleppo.

Troops loyal to Russia's ally Bashar al-Assad finally ousted rebels from the city last month in their biggest victory in more than five years of fighting.

Sarah Lain, a Russia expert with the Royal United Services Institute (RUSI), told Middle East Eye on Friday that it "remains to be seen" whether Russia will actually withdraw significant military capabilities, "given the fact that they simply readjusted when they announced a withdrawal in March 2016.

"However, pressure has mounted on Russia to draw the conflict closer to discussion over a political transition. In November the government agreed to cut military spending by 1 trillion rubles, indicating that there are economic limits on Russia’s defence policy," she said.

"The Russian government is very aware that it does not want its role in this conflict to drag out indefinitely. This is not only because part of the reason behind Russia’s intervention was to highlight the failures in the West’s approach to the Middle East, but also because the Russian population’s appetite for foreign war when the economy is struggling at home is not without limits."

The recent victory in Aleppo has paved the way for the Kremlin to launch a fresh push for a political solution to the conflict.

Russian President Putin ordered a reduction in his forces in Syria on 29 December, as he announced a ceasefire between government and rebel forces that has since dampened down the fighting.

Russia, along with Turkey and Iran, is currently pushing for peace talks to be held later this month in the capital of Kazakhstan, Astana.

However, several rebel groups have said they will suspend their participation in the talks over what they say are repeated violations of the ceasefire terms by pro-government forces.

Moscow launched its bombing campaign in Syria in September 2015, helping to turn the tide in favour of Assad's ailing forces.

Putin already announced a partial withdrawal of Russian forces in March 2016, but Moscow later had to ramp up its presence again as fighting increased. 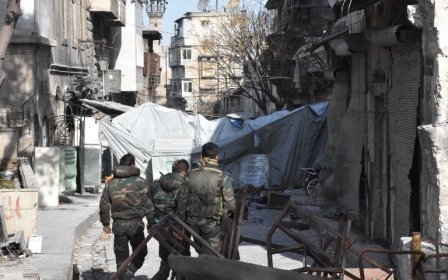