Russia 'close to agreeing joint Aleppo operations with US' Russia is close to agreeing joint military operations against militants in Aleppo, the Russian defence minister was quoted as saying on Monday.

Sergei Shoigu was quoted by the RIA news agency as saying defence officials were in "a very active phase of negotiations with our American colleagues".

"We are moving step-by-step closer to a plan - and I'm only talking about Aleppo here - that would really allow us to start fighting together to bring peace so that people can return to their homes in this troubled land."

The statement came as rebels in Aleppo reportedly continued to gain ground on forces loyal to the Syrian government and their Russian allies.

Aleppo is home to myriad rebel groups including some considered "moderate" by the US, such as the Free Syrian Army. However, other groups such as the al-Qaeda linked Nusra Front, which recently rebranded itself Jabhat Fateh al-Sham, also operate in the city.

Shoigu said Moscow and Washington were still deeply at odds over Aleppo, and accused rebels of holding civilians hostage and using suicide bombs.

"In the eastern part of Aleppo, people are hostages," he said. "That's moderate opposition? Who is this?"

He blasted accusations that Moscow had imposed a blockade on rebel-held areas of the city as "untrue" and "propaganda".

Lavrov, speaking in Yekaterinburg, said he realised that brief daily ceasefires in place now to allow aid to enter and civilians to leave were not sufficient.

But he said it was difficult to make the ceasefires longer for the moment because of the risk of militants using them to regroup and rearm, something he said they had done in the past.

Russia to meet opposition in Qatar

Separately Lavrov's deputy, Mikhail Bogdanov, told RIA that he would meet representatives of the Syrian opposition in the Qatari city of Doha on 16 August.

The statement did not say which rebel groups would be in attendance, and there was no confirmation from the opposition.

Last month, Lavrov said Russia and the US had agreed on “concrete steps” to ensure a long-term ceasefire in Syria and fight their common enemies, Nusra and Islamic State.

Russia claims it is targeting "terrorist groups" in Aleppo but many sources say their bombing is indiscriminate and deliberately targets hospitals and civilian areas in the city.

Lavrov's comments came after meeting in Russia with his US counterpart, John Kerry.

“We have confirmed our goals to destroy the threats that come from the so-called Islamic State, Nusra and other terrorist organisations and to stop feeding terrorism, which comes from the outside,” Lavrov said.

Kerry noted that “the concrete steps we have agreed on are not going to be laid out in public in some long list because... they need more work.” 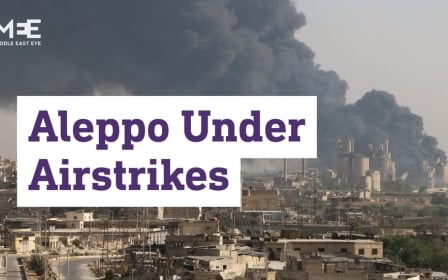