Russian embassy in US compares Aleppo to battle for Stalingrad German soldiers pictured during the battle of Stalingrad, which took place during the winter of 1942 to 1943 (AFP)
By
MEE staff

The Russian embassy in the US has stoked controversy by suggesting that the Syrian government-led assault on rebel-held areas of Aleppo is akin to the battle for Stalingrad during World War Two.

The embassy in Washington also compared Russian and Syrian government bombing of the city to the levelling of the Chechen capital Grozny in the 1990s.

In a tweet on Monday, the embassy posted photos of Russian cities including St. Petersburg and Volgograd, formerly Leningrad and Stalingrad, which were the scenes of epic battles between the Soviet Union and Nazi Germany.

"Had we not defended these (and others), their residents would've fallen victims to hateful, criminal Nazi ideology," it said.

Beautiful cities of #Russia. Had we not defended these (& others), their residents would've fallen victims to hateful,criminal Nazi ideology pic.twitter.com/hhWAUHOYMx

The tweet also included images of Smolensk, the western Russian city that was almost entirely destroyed during the war, and Sevastopol in the Crimea which Russia annexed from Ukraine in 2014.

All four were honoured as "Hero Cities" by the Soviet Union as a consequence of the devastation they suffered. Millions of Soviet soldiers and civilians died during the 1941-1945 conflict.

The Soviet Union's victory over the Nazis at Stalingrad in southern Russia in 1943 is considered one of the key turning points in World War Two, when the German advance into Soviet territory was halted and then reversed.

Comparisons between that battle and the fight for Aleppo were also drawn by Syrian President Bashar al-Assad in a message to Russian counterpart Vladimir Putin to mark Russia's Victory Day, commemorating the country's defeat of Nazi Germany.

"Stalingrad is dear to Aleppo and all Syrian cities. Syria vows to continue fighting until the aggressors are defeated and the ultimate victory is ours," Assad was quoted as saying by the Syrian state news agency SANA.

In an earlier tweet on Monday, the Russian embassy said that Grozny, which was described by the United Nations in 2003 as the most destroyed city on earth, was now a "peaceful, modern and thriving city".

Russia besieged and bombed Grozny for months during the Second Chechen War to capture the city from rebels, including Islamist militants.

#Grozny today is a peaceful, modern, and thriving city. Ain't that a solution we're all looking for? @JohnKerry? @BorisJohnson? | #Aleppo pic.twitter.com/4VWOyVudGX

While observers have drawn parallels between the Chechen capital and Aleppo to condemn Moscow, the Russian embassy in Washington used the comparison to make a case for the Kremlin’s intervention in Syria.

Russia, whose forces are fighting in support of the Syrian government, is leading an intensive bombing campaign against rebel-held east Aleppo with the UN envoy to Syria warning that districts under assault may be totally destroyed in two months.

“#Grozny today is a peaceful, modern, and thriving city. Ain't that a solution we're all looking for? @JohnKerry? @BorisJohnson? | #Aleppo,” the embassy wrote in the tweet.

Internet users were quick to point to the misery brought to Chechnya by the Russian war.

In its sick trolling, @RusEmbUSA seems to have lost the images of what it is responsible for in #Grozny. #Russia brings war, not peace. pic.twitter.com/BJrlVAkfr2

The Russian army and pro-Moscow Chechen forces fought off separatists and Islamists to take control of Grozny in a campaign that started in 1999. The war ended the Chechen de-facto autonomy and returned the region to Moscow’s control.

"Russian forces have committed grave abuses, including war crimes, in their campaign in Chechnya," reads a 2000 Human Rights Watch report. "In Grozny, the graffiti on the walls reads 'Welcome to Hell: Part Two,' about as good a summary as any of what Chechen civilians have been living through in the past five months."

After the war, dozens of mass graves containing the remains of civilians were discovered across Chechnya.

"@RusEmbUSA, above how many mass graves are these nice buildings erected?!.. @JohnKerry @BorisJohnson,"  a visiting scholar in Carnegie's Middle East Programme, tweeted in response to the embassy's tweet.

Twitter has been used as a medium for political statements between officials and states in recent regional spats.

Last week, Iraqi Prime Minister Haider al-Abadi tweeted at Turkish President Recep Tayyip Erdogan to taunt him about his video call message during the failed coup in July after the latter told him to "know his place" in a dispute about the presence of Turkish forces in northern Iraq. 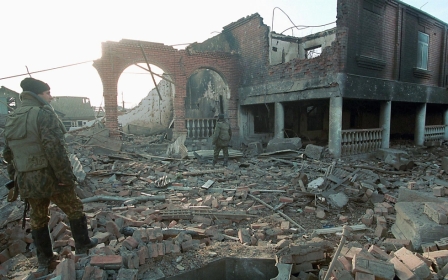 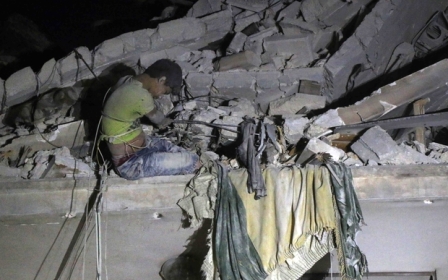